A Marathon of Screams: The 10 Best Horror Series Currently Streaming on Netflix

Without a doubt, we are experiencing another golden age of television. Not only in the quality of content but also the accessibility. With one click of the mouse or a simple finger tap, you can pretty much watch whatever you want, whenever you want. This is especially good news for horror enthusiasts because the genre has not always been welcomed or available on the small screen.

Streaming is a prevalent method in how we consume our media. Arguably the most popular and well-known streaming service is Netflix. And for all the complaints people have about this mega provider, it does a commendable job of satisfying eclectic horror fans’ appetites. If you’re having trouble picking one horror show to watch, then keep reading for I’ve chosen ten series that stand out among the crowd. MTV’s Scream the TV Series incurred the wrath of horror fans and critics when it premiered in 2015. When you try to adapt something as heralded and beloved as the Scream films, there’s undoubtedly going to be some pushback. Though in hindsight, the show is better than its reputation suggests. Especially the second season, which includes a fun Halloween special. Season three is on the way!

9. THE CHILLING ADVENTURES OF SABRINA From the creators of Riverdale comes a subversive take on the witchy Sabrina Spellman we all grew up with. The Chilling Adventures of Sabrina marries occult horror with breezy teen drama near seamlessly. This is one dark re-imagining worth checking out. Even if you’re not a fan of reality shows, Dead Set should not be missed. In this limited five-part series from 2008, the cast and crew of Big Brother are stranded during a massive zombie outbreak. The premise admittedly sounds silly. However, this tongue-in-cheek mini-series is also surprisingly quite bloody and unnerving to watch. This is the best way to describe Diablero: it’s really nuts. You expect this to be just another rehash of The Exorcist, but it’s refreshingly different. Basically, it’s about a priest who enlists the help of a colorful demon hunter when his estranged daughter is abducted. Oh, and did I mention they’re assisted by a legit superhero? Yep. This Mexican series is humorous, but then there’s some truly dark moments as well. Season two is on its way as we speak. This one seems like an anomaly on the list, but it’s no secret that horror comes in all shapes and sizes. Based on the novel of the same name by Caroline Kepnes, this series about a bookstore clerk stalking an unwitting young woman recently became the water cooler hit both on and offline. If you ever wondered how serial killers behave on an everyday basis, then look no further. Netflix’s acquisition of You was a smart move. They gave the show a new lease on life after it received a lukewarm response during its Lifetime run. People have now come to see it’s a crafty psychological thriller that taps into people’s everyday fear of strangers and what sinister thoughts they could be thinking. Viewers will be kept on their toes with every binge-worthy, uncomfortable episode. Expect more creepiness in the second season, which is based on the author’s followup novel to You. Before the unfortunate demise of Chiller, the horror centric network conceived an original season-long anthology called Slasher. Everyone thought the impenitent series was dunzo as soon as Chiller went belly up, but Netflix did fans a solid by greenlighting a new season. We hope to see more even more startling twists and ample bloodletting in the upcoming third season subtitled “The Druid”. You might have glossed over this South Korean import when browsing Netflix for your next binge-watch. It seems like a standard period piece, but looks can be very deceiving. Set in the Joseon era, a king’s domain is infected by a mysterious plague that renders people voracious… for human flesh. Yep, this is a zombie show. Now before you skip to the next entry, stop and keep reading. The zombie wave comes in spurts these days after cinema-goers endured a torrent of flesheaters not too long ago. The key to making a good zombie project, though, is ensuring the threat of the undead is actually felt by viewers. And no doubt about it—you will feel threatened in Kingdom. On top of that, the production values are stunning. You might have to wait a short while, but rest assured, Netflix has another season coming out in the near future. When news of this show first broke, people were skeptical. A prequel about Norman Bates? Who asked for that? But all it took for naysayers to change their minds was to actually watch Bates Motel. In the series, Norma Bates and her troubled teenage son Norman move to a new town so they can run an old motel. There, the pair’s unhealthy relationship is quickly put on full display to the neighbors. It’s true the show takes a little time to find its footing. Any great slow burn is like that. Once Bates Motel establishes its characters and the world they live in, you’re in for a chilling character study. We all know film-to-TV spin-offs don’t always work. Luckily for you, Ash vs Evil Dead is not one of those flops. The series namesake returns to stop the Book of the Dead in this blood-soaked companion piece to the film franchise. It’s recommended you watch at least the first two movies before diving into the show, but the writers try their hardest to keep novices informed along the way. Bruce Campbell slips back into his iconic role with ease, and he’s joined by a cast of supporters who match his energy perfectly.

1. THE HAUNTING OF HILL HOUSE 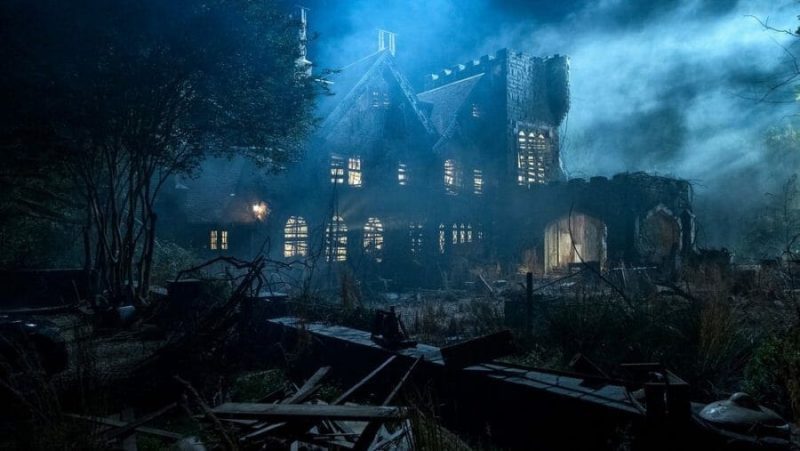 The world was not prepared for this revision of Shirley Jackson’s classic 1959 novel. Not at all. Having Mike Flanagan (Hush) at the helm was surely a hint of what was to come. In the first season of Netflix’s The Haunting, the surviving members of the Crain family are dealing with the supernatural repercussions of living in the notorious Hill House. Lately, horror in general has been moving toward a more emotional, introspective direction. Flanagan’s Hill House expertly participates in that movement by summoning feelings not always brought up in the genre. The first season is by no means a standard ghost story. At its heart, The Haunting of Hill House is a stirring series about family. A new season entitled The Haunting of Bly Manor will be coming to Netflix in 2020.

What will you be bingeing tonight? Sound off with the Nightmare on Film Street community over on Twitter, our Official Subreddit, the Fiend Club Horror Group on Facebook!