All Is Scary And Bright: 10 Holiday Horror Favorites Streaming in December Happy Holidays fiends! I hope you’re all staying safe this holiday season and you have all the hot cocoa and festive decorations you could need to get you through the end of this garbage year. It’s redundant to say that the holidays feel a bit different this year, but given the fact that a lot of us are likely spending more time indoors and less time socializing, we all could use a handful of great horror movies to get us through. In the event that you have run out of holiday horror movies to watch while you curl up in front of the fireplace, look no further! Read on to find out my top ten recommendations of festive horror movies that are available to stream right now! While these picks do feature mostly Christmas-centric festivities, I’ve sprinkled in a couple of New Year’s horrors for those of you who crave a little variety. Stream it on: Prime, Shudder

This anthology has a little something for everyone, including and not limited to; Santa, nuns, Christmas trees, and Krampus himself divided up into four festively freaky segments. The real crown jewel of A Christmas Horror Story however, has to be the narration by William Shatner as the rough around the edges radio DJ, Dangerous Dan. For fans of anthology horror, this will be the perfect casual watch to scratch that festive itch. Stream it on: Prime

While I couldn’t dig up any Hanukkah or Kwanza horrors that I could recommend in good conscience, (drop your picks below if you have any!) New Year’s is another story entirely. Welcome to the punk rock, New Year’s Eve slasher of your dreams. With the backdrop of eighties music television New Year’s Evil follows television host Diane “Blaze” Sullivan  (Roz Kelly) during her New Year’s Eve countdown broadcast as she is taunted by phone calls from a masked killer promising to commit a fresh murder as the clock strikes midnight in each different time zone across the US. The hair is big, the music is loud, and the holiday spirit is alive and well in this festive flick. Here’s a recommendation for after you’ve watched Home Alone (1990) but are craving more brutality to your Christmas violence. This Australian psychological holiday horror puts you in the shoes of teenage Ashley (Olivia DeJonge) as she fights off an intruder while babysitting twelve year old Luke (Levi Miller). Better Watch Out is full of so many twists and turns that it feels treacherous to describe it beyond that point, but suffice to say there is a lot of Christmas spirit present in this one. No, not that Jack Frost (1998). Instead of the heartwarming story of a boy’s dead father coming back to life as a snowman, this Jack Frost tells the story of a serial killer who becomes transformed into a killer snowman and wreaks havoc on the quiet town of Snowmonton. Full of the cheesiest jokes, the most wildly inconsistent snowman, and a supremely unfortunate scene involving a carrot nose, Jack Frost is the perfect Christmas movie for the more subversive holiday viewer. Stream it on: Prime

You know what’s always great? A holiday themed, slasher movie starring Jamie Lee Curtis. Terror Train is at least the second best example of this as we follow a group of students getting picked off one by one during their New Year’s Eve costume party that takes places entirely on a moving train. I will say, a big reason why Terror Train gets a higher ranking on my list than our other New Year’s Eve horror is the inclusion of David Copperfield doing magic tricks in various train cars. Magic tricks, a hilarious Groucho Marx costume, and final girl Jamie Lee Curtis are just some of the joys you can expect aboard Terror Train. Stream it on: Tubi, Prime

What would the holiday season be without constant bickering with your dysfunctional family? In Dead End, while driving through the night to visit family on Christmas Eve, the Harrington family finds themselves trapped on a never-ending, nightmarish road with no escape in sight. The focus stays enough on the squabbling between the family members that you almost forget about the unexplainable circumstance that they find themselves in, until you are oh so painfully reminded. Maybe this one will make you feel a bit better if you’re bummed out about not being able to visit with extended family this Christmas. Family gatherings during the holiday season can be tense, but at least I hope we can all be thankful that we don’t have a brood of blood thirsty children roaming around our homes. There’s no such luck for the family in The Children however, when they discover that all of the children have become infected with a virus that drives them to kill, and oh boy do they! The Christmas festivities turn into an all out bloodbath in this holiday horror that maybe…you don’t want to watch with your kids. Stream it on: Hulu, Prime

What screams Christmas more than candy canes, singing, dancing and…zombies? Anna and the Apocalypse blends together the genres of musical, comedy, and horror to tell the story of Anna (Ella Hunt) and her friends navigating high school and the zombie apocalypse through song. When their sleepy town wakes one day to find the streets overrun by zombies, our characters have to fight to make it back to their loved ones without becoming infected by the undead themselves. Come for the zombies, but stay for the amazing cast album. 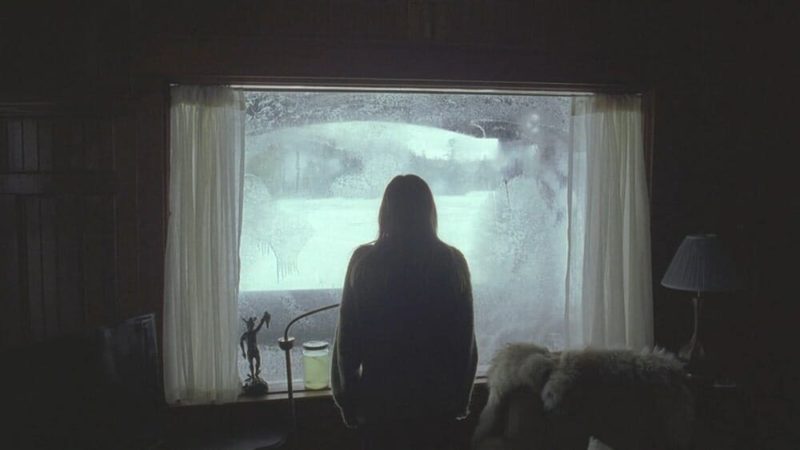 Stream it on: Hulu

One of the last pre-pandemic films to be released in US theaters this year may also be one of the most disturbing. The Lodge stars Riley Keough (It Comes at Night, Mad Max: Fury Road) as Grace, a young woman tasked with spending Christmas in a secluded lodge alone with her fiancé’s children, Aiden (Jaeden Martell) and Mia (Lia McHugh). If that doesn’t sound horrifying enough on its own, there’s also the added terror of unexplained happenings plaguing the three of them more and more with each passing day. Christmas fun for the whole family!

One of the first ever slasher movies, as well as one of the all time best horror movies, also just so happens to be a kick-ass Christmas movie. Black Christmas follows a sorority house tormented by threatening phone calls during their winter break, that quickly escalate to actual physical violence as it becomes apparent a dangerous intruder is in their midst. Of all the things to love about Black Christmas, easily topping the list is Olivia Hussey (It, Romeo and Juliet) as Jess as well as the thrilling and creative kills shown on screen. While it’s likely that Black Christmas is the first movie that comes to mind for many people when considering holiday horror movies, on the off chance one of you out there hasn’t seen it yet, there’s no time like the present!

What horror movies are in your yearly rotation for the holiday season? What movie fills you with the most festive spirit? Let us know your thoughts over on Twitter, Reddit, or in the Horror Movie Fiend Club on Facebook, and Happy Holidays!