“Trick or Treat” is one of the most seemingly innocent conventions synonymous with the Halloween holiday. While it may seem considerably dark to think hard on the ultimatum, trick or treat, the combination of the two is something so much scarier… and, oftentimes, sickening. We’ve heard the myths and news reports of random candy poisonings and spiking of treats with sharp objects, but the horror genre takes consumption subterfuge to a whole new level of gross and gory.

This list of 10 Horror Movie Characters Who Died Eating Food may flag my IP address for nefarious Googling of food poisons, but each one drives home one important warning: Always check your candy. You don’t want to wind up like that kid in Halloween II. I still don’t have the guts to bite into a whole apple because my mom told me that was where the razor blade came from. Thanks, mom.

Twists, secrets, character deaths, and murderers are exposed in this list. There’s no tricks about it: if you haven’t seen these films, don’t spoil your appetite… Diner food is a little shady as far as dietary sustenance, especially when it comes to the coffee. Children, on the other hand, are always capricious beings, especially when it comes to the horror genre. Fritz Kiersch’s adaptation of Stephen King’s short story, Children of the Corn, sees the youngsters of a rural town wipe out the adult population as human sacrifices to a faceless entity. One way to get rid of the masses? Poison the coffee at the local diner. Turning children into monsters is pretty terrifying, but there is nothing more cruel than poisoning coffee. Those diners should have been more vigilant, but who would ever negatively suspect children… or coffee? 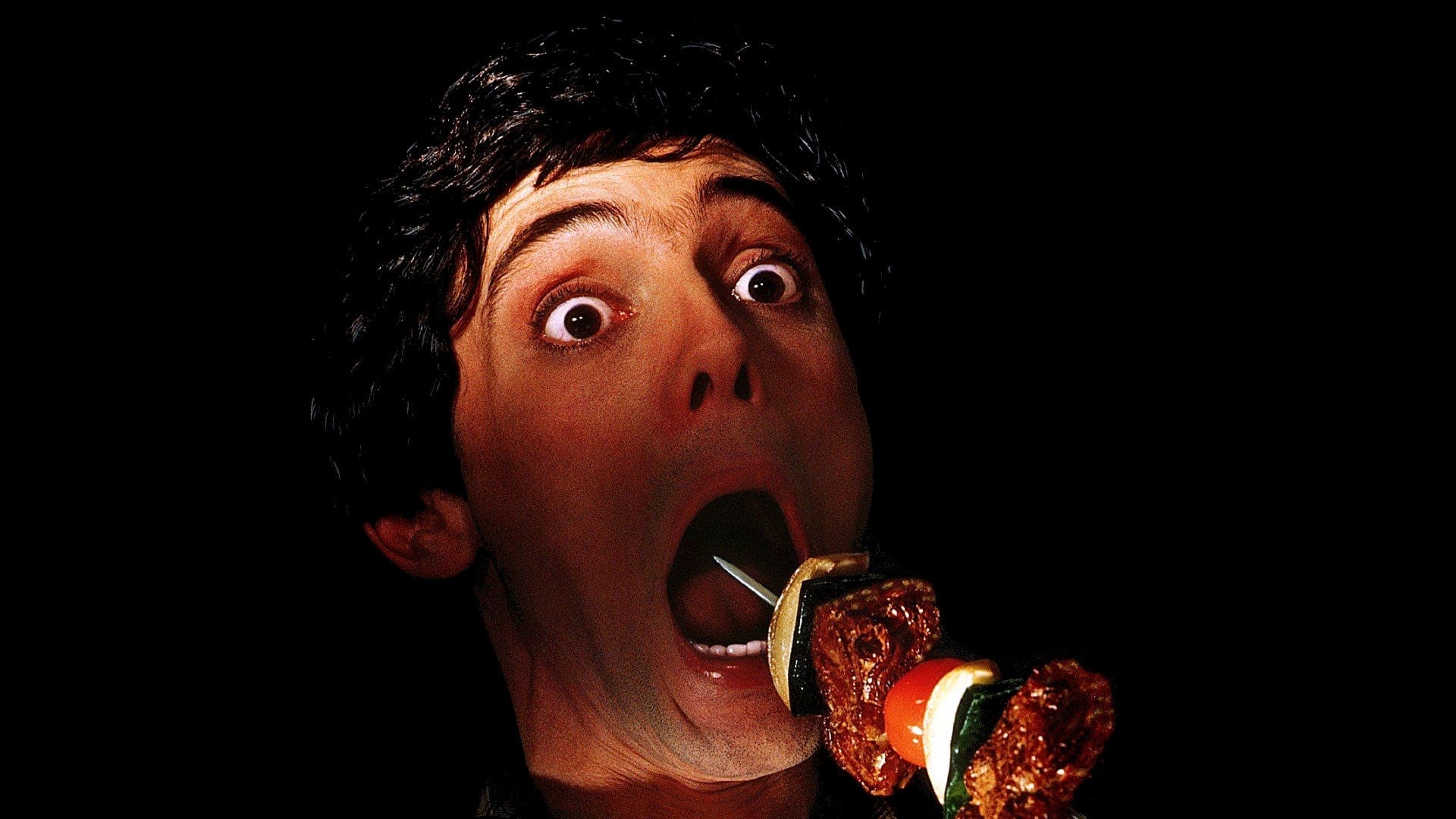 I am not exactly sure what would be sexy about shish kebabs, but I do know what makes them dangerous. A highlight of J. Lee Thompson’s splatter slasher, Happy Birthday To Me, involves one victim’s run-in with a simple barbecue tool. While a string of bizarre murders take place, birthday girl Ginny invites Steve over for a romantic fireside evening and a rather unique meal. As she seductively feeds Steve pieces of meat off of the pointed skewer, Ginny seems innocent and coy. She quickly turns on a dime and shoves the kebab straight through his mouth turning the guy into the strangest meat-on-a-stick since the corn dog.

Revenge is a dish best served to the right people, or so Billy Halleck learns in Tom Holland’s adaptation of Stephen King’s novel, Thinner. Billy is an extremely overweight lawyer who is cursed by a group of gypsies after he kills one of them and gets off with the help of some legal friends. Billy becomes thinner and thinner, his friends dropping one by one, until he learns that in order to break the curse he must have someone eat from a deadly pie poisoned by his blood. The dessert is intended for Mike Houston, Billy’s doctor who he believes to be having an affair with his wife, Heidi. Unfortunately, strawberry pie is pretty irresistible and both Heidi and her and Billy’s teenage daughter, Linda, cut a piece for themselves. It’s pretty devastating, but don’t worry: Mike gets his own slice too. When it comes to the Nightmare on Elm Street franchise, the kills are tailored perfectly to each sleepy victim that crosses Freddy Krueger. Among the most memorable, Greta’s forced feast feeding in Stephen Hopkin’s Nightmare on Elm Street 5: The Dream Child is one of the more grotesque. Greta’s trying food habits are ultimately used against her in an overeating dream. Trapped in a giant highchair, Freddy feeds Greta organs from a doll made in her image, which she later learns are her real organs. In reality, Greta convulses and chokes to death while her bloated face is continuously stuffed in the dream world. I guess you are what you eat. You know what they say: Keep your friends close and your enemies closer. The best way to uphold that notion is to stick to them with sugary, sticky sweetness sprinkled with undetected poisonous hatred. Tree dies over and over again while trying to figure out who is attempting to kill her for good to begin with in Christopher Landon’s Happy Death Day. The answer to her mysterious death cycle lies in her roommate’s vengeful birthday cupcake. The morning surprise gifted to Tree by her supposed friend is the most innocent snack, but reveals so much more about the culprit and even forces Tree to find out so much more about herself. Carbs aren’t the only dangerous ingredients baked into that killer treat. It is amazing how often we entrust our well-being to complete and total strangers. Karyn Kusama’s slow-burn horror, The Invitation, focuses on a tense dinner party among adult friends, but the protagonist, Will, is paranoid about some of the guests’ intentions. In a few unnerving twists and turns, Will’s growing concerns about the cult his ex-wife, Eden, and her new lover, David, have joined get the best of him. Will believes the drinks poured by David have been tampered with and in an attempt to prove there is a homicidal grand plan, he smashes them out of their hands. His friend Gina is not so lucky, however, as she drank from the glass prior to Will’s outburst. Gina becomes unresponsive and stops breathing. It’s a tremendous climax that validates all of Will’s suspicions and only moves the third act into quality chaotic intensity. David did open some great wine… The whole Pop Rocks and Coke cocktail myth is an old wives’ tale, right? A group of college coeds being preyed upon by a hooded killer in Jamie Blanks’ Urban Legend think they know fact from fiction. However, the life of the party, Parker, learns the real truth the hard way. Pop Rocks are pretty lethal when mixed with bathroom cleaner. Funneling the hard popping sweets down his throat topped with liquid chemicals, the killer causes Parker to choke to death through horrifying foaming regurgitation while trapping him in the bathroom. It’s safe to say that fizzy soda won’t cause your stomach to explode if mixed with the crackly candies… but are you brave enough to give it a whirl?

3. Kyra in The Sixth Sense

Munchausen’s Syndrome by proxy is a horrendous form of child abuse and grants a woman’s murderous behavior as one of the biggest blows in M. Night Shyamalan’s The Sixth Sense. By listening to the woes of the dead, young Cole is able to communicate the truth behind another child’s death. Kyra is slowly sickened and eventually expires causing her to reach out to the only living soul that can help her move on. Cole exposing video footage of Kyra’s own mother pouring liquid cleaner into her soup is incredibly sad and a true horror many children fall victim to at the hands of their ill parents. Would you ever suspect the food given to you by your parents? Food allergies are no laughing matter and neither is Ari Aster’s premiere cult horror, Hereditary. Young Charlie is allergic to nuts and is trained to check her foods for the deadly additives. Unfortunately, she’s forced to tag along with her brother to a house party and is distracted with a slice of chocolate cake, one baked with chopped nuts inside. Charlie slowly feels the warning symptoms rash her skin and close her throat, sending her and her brother into a tragic car race to the hospital. The fatal event may not be the direct result of the nutty cake, but it is definitely triggered by the dessert… that or the predestined workings of a cult. You be the judge. When it comes to the most nefarious kinds of goodies, Halloween candies are not to be trusted and neither is the nice man who lives next door. Michael Dougherty’s wicked anthology, Trick ‘r Treat, portrays many innocent holiday traditions in a darker light, but none comes quite as shocking as the death of pudgy jack-o-lantern smasher named Charlie. His school principal, Mr. Wilkins, gives him a stern lecture about respecting the rules of the season while Charlie gorges himself on chocolate. The delicious hand-outs have an extra fun surprise inside (cyanide) and the result is a projectile kind of sick fit for gory nightmares.

I hope everyone has a safe and happy Halloween, just remember the most important rule: Always check your candy… and every edible article you encounter. You can’t be too careful. Who’s your favorite character killed while eating food? What’s you favorite deadly treat on film? Let us know your thoughts over on Twitter, Reddit, or in the Horror Movie Fiend Club on Facebook!