Kickstarter hopeful Automata is a creepy, fun little project that hopes to bring you a fresh, Lovecraftian spin on the haunted doll genre. From Chucky to Annabelle, evil dolls have long been haunting our screens and causing night terrors in children. There are few things more fun to watch than humans having their sanity tested by a seemingly harmless doll. But what if the dolls weren’t just possessed by an evil being but also life sized?! That’s exactly what our characters are up against in Automata, and it looks like a hell of a lot of fun.

With 16 days to go the Kickstarter project has raised 76% of their $112,136 goal. And honestly, it’s worth backing this project for the pledge rewards alone. There are limited edition books, T shirts and DVDs with exclusive footage, but my favourite reward would have to be the owlman plush. With its fuzzy owl head, sharp claws and snappy dress sense, seriously who wouldn’t want this?!

Automata is a Gothic thriller, filled with spine-tingling twists and gut-wrenching dread that will linger with you for years to come. Our supernatural tale pits a lonely widower and his stepdaughter against a foe like no other, a three-hundred-year-old, life-size clockwork doll, known as ‘The Infernal Princess. The Infernal Princess’ was considered so lifelike and uncanny in its day that it provoked fear and awe among all who saw it. During its unveiling in 1786, the clockwork doll performed five ‘great feats’ which were so incredible as to defy all explanation’.

With its seventies style font and beautiful old world setting, the trailer gives Automata an almost Argento meets Penny Dreadful feel to it. Let’s face it; Scottish director Lawrie Brewster knows his material having already made Lord of Tears, The Black Gloves, and Unkindness of Ravens. All three Lovecraftian, Gothic Horrors, that were also successfully funded Kickstarter projects. So backers should feel pretty confident with their investment.

So let’s all back this project because what the world really needs right now are more killer dolls (and owlman plushies). 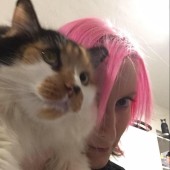