Choose Your Own Adventures are nothing new. But in true Black Mirror fashion, Bandersnatch isn’t out to only use the format as a means of content delivery. More meta than Wes Craven’s Scream, it becomes a tool to immerse the viewer in the questions of whether or not free will exists, if we all follow preordained paths, if divergences exist based on our choices, and there are several versions of our selves living out simultaneously, affected by the very cereal we chose for breakfast. Hoo boy. 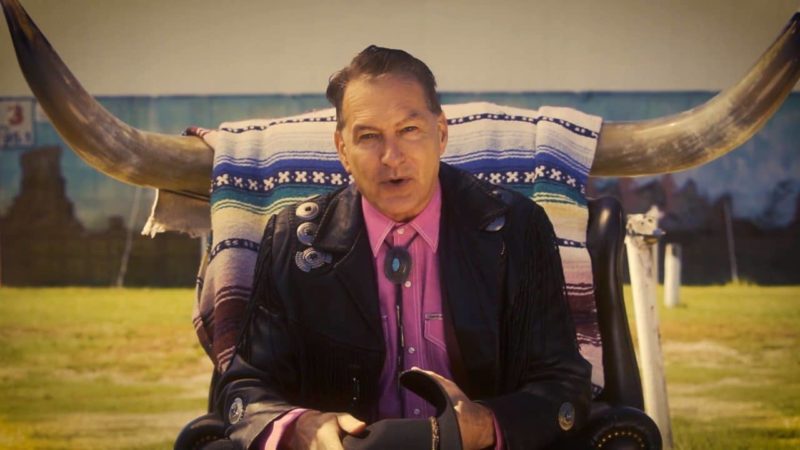 This may be a little bit of a cheat, but it is impossible to ignore the impact of Joe Bob Briggs’ return on the horror community. Welcomed back with open arms, Joe Bob revived the age old tradition of late night horror hosts with the monumental 24-hour Last Drive-In marathon on July’s Friday the 13th. He has since gone on to host a Thanksgiving and Christmas special, all through Shudder TV, and will return in 2019 as a weekly recurring series.

If you aren’t already, please do yourself a favor and join Shudder now!

Allyson Strode’s friend Oscar is having no luck on Halloween night. He has no date to the big school dance, he picks the absolute worst time to hit on his best friend’s girl, and he comes face-to-face with the scariest trick-or-treater of them all: Michael Myers. Easily the most subtle kill of the entire movie, Michael appears and disappears in between strobes of light, like a living ghost, before hanging Oscar out to dry. If you’ve seen Puppet Master: The Littlest Reich, then I’m sure you understand why I can’t use a photo from the infamous Bathroom Scene. And if you haven’t yet found the time to see the new Puppet Master, put this one right at the top of your hangover watch-list on New Year’s Day. The Littlest Reich contains some of this year’s most creative and bloody kills, but this one in particular is by far the most outlandish and ruthless of the bunch. Puppet Master: The Littlest Reich is a rowdy, crowd-pleasing bloodbath, perfect for old and new fans alike; A film that is wholly unapologetic for it’s depraved sense of humor and creative, merciless slaughter.

The Dance of Another

Luca Guadagnino’s Suspiria divded audience members into two very distinct camps. But one things most everyone could agree on, was a creepy little dance number that ended with a young woman being ripped apart in a gloriously horrific eruption of broken bones. The dance number was among some of the first footage shown publicly at CinemaCon were “many attendees reportedly looked away in horror, and Amy Kaufman of the LA Times tweeted that she was ‘traumatized’ after witnessing the scene”.

We are all familiar with the raw, unfiltered energy that Nicolas Cage brings to a role. No one has harnessed that power like director Panos Cosmatos in Mandy. Reeling after the loss of his wife, Red grieves alone, allowing himself to feel EVERYTHING in one of the most incredible performances of Cage’s career. He expressions an entire range of emotions, including some I forgot existed, but felt again in a faded familiarity as though reaching out from a memory that pain had destroyed. All while he drinks an entire bottle of emergency vodka to himself! Johannes Roberts’ The Strangers: Prey At Night is a love letter to 80’s killer flicks, and no better scene examples that choice than the harrowing Pool Sequence. Scored to Bonnie Tyler’s Total Eclipse of The Heart, the pool sequence pits one of our main characters in a nerve-wracking cat & mouse game, bathed in fluorescent lighting. Sitting in a packed theatre no less than half a dozen people looked away as poor Luke was left to “drown” in the shallow end. I’ve sat through this scene several times now and those final moments are still as effect as they were the first time around.

Read Nightmare on Film Street’s full review of The Strangers: Prey At Night

Yep, the movie was so good it has TWO spots on this year’s list. Every scene in Panos Cosmatos’ Mandy is memorable but none is more arresting than Mandy’s Manson-esque, LSD fueled hallucinations. Washed in eerie pallet of pinks, we stare on as Mandy face blends and fades into Jeremiah‘s while he tries to break her mind for worship and devotion. Like many scenes in the film, this sequence is hauntingly, and gorgeous, and unlike anything we have ever seen before.

The Accident in Hereditary Hereditary is an assault on your emotional response and Alex Wolff’s performance taps into that jarring, raw and realistic emotional response. This is where the  film really shines –  in its ability to create emotional turbulence in its audience. Even in a theatre of hardened horror movie fans, no one dared make a sound in this moment. We all collective sat in petrified stillness, unaware that our breath had been ripped out from inside of us. You could hear a pin drop. And in horror, there is no better compliment.

Those are Nightmare on Film Street’s picks for Top 10 Horror Moments of 2018! How’d we do? Let us know on Twitter, our Official Subreddit, and over in the Fiend Club Facebook Group!