In 2019, I viewed over 100 new horror and genre films. Some of them were in cinemas with eager horror audiences, others at film festivals, or cowering over my laptop in a press room while journalists interviewed talent and napped around me. Films from tiny budgets of only a few thousand dollars and a group of filmmakers with a dream, to big studio endeavors with flower crowns, red jumpsuits, or an appearance from Daniel Craig.

Before I begin counting down my top 10 horror films of 2018, here’s a quick rundown on how my list will differ from the others popping up all over the horrorverse. Firstly, I use the term ‘horror’ loosely. I don’t want any @’s. All of the films on my list veer into the ‘genre’ spectrum in some way, and I’ve deemed them all fair game. Second, some of these films aren’t out yet. This list contains films that premiered at festivals in 2019 and saw wide release – whether to cinema screens, VOD, or straight to DVD.  This may seem like an annoying decision at first, but think of it as the list that keeps on giving! Some of these titles you can watch right now, some you’ll have to look forward to as they find their way to full release in the new year. Lastly, these selections come without very much commentary. I encourage you to check out the Nightmare on Film Street Bonus Episode where Jon and I go through our Top 10 lists in more detail! It’s now available on Apple Podcasts, Google Play, & Spotify.

Alright, without further lollygagging – Here are my Top 10 Horror Films of 2019! Gaspar Noé’s Climax is a stunning head trip of lucid chaos. Following a 90’s dance troupe, a “drug-laced sangria causes their jubilant rehearsal to descend into a dark and explosive nightmare as they try to survive the night — and find out who’s responsible — before it’s too late.” Noé’s now-signature fluid and ethereal camera movements slink and slip between the orchestrated chaos of dancers at their best.. and human beings at their worst. This film is confronting, disorienting, and succeeds in breaking the confines of the screen to immerse you in its world. 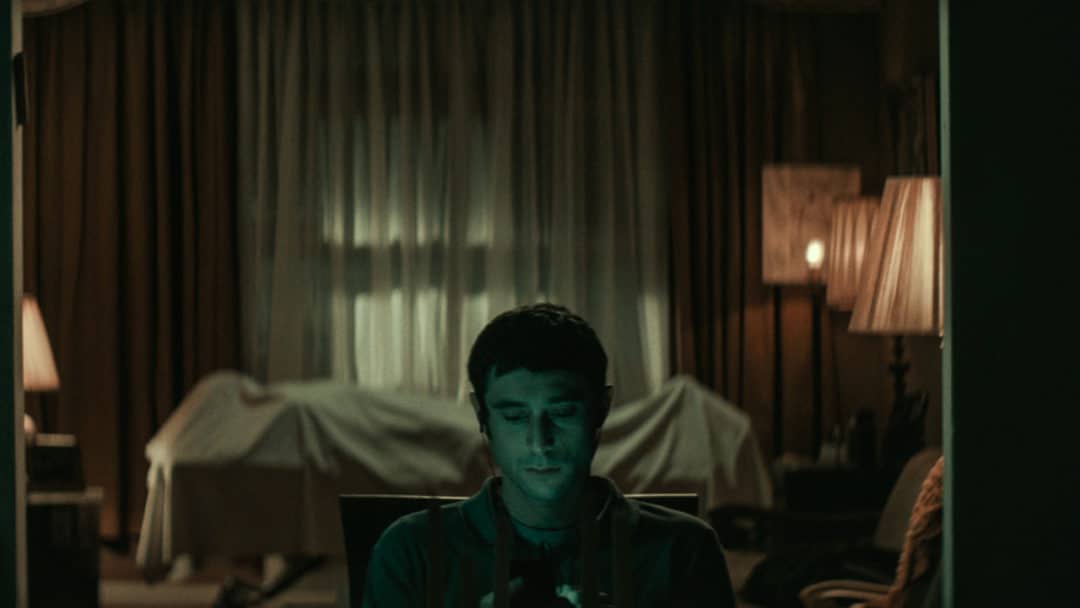 Isolating, eerie, and unpredictable, The Vigil marks the feature debut of writer/director Keith Thomas. The film follows a former Orthodox Jewish man, who provides “overnight watch to a deceased member of his former Orthodox Jewish community [and] finds himself opposite a malevolent entity”. With the most artful use of a corpse-y setpiece as The Autopsy of Jane Doe, this indie horror utilizes its dark and claustophobic atmosphere to amplify the haunts to maximum volume.

Read Nightmare on Film Street’s full review of The Vigil. Sunsoaked and uncomfortable, Ari Aster’s Midsommar takes us out of the darkness and into the worst break-up of all time. Or perhaps the best break-up film.. if you’re a horror fan. Following the grieving and distraught Dani (Florence Pugh), her cold boyfriend and pals who head “to Sweden to visit their friend’s rural hometown for its fabled midsummer festival, but what begins as an idyllic retreat quickly devolves into an increasingly violent and bizarre competition at the hands of a pagan cult.”  It’s one part Wicker Man, two parts Ari Aster-worthy grief. 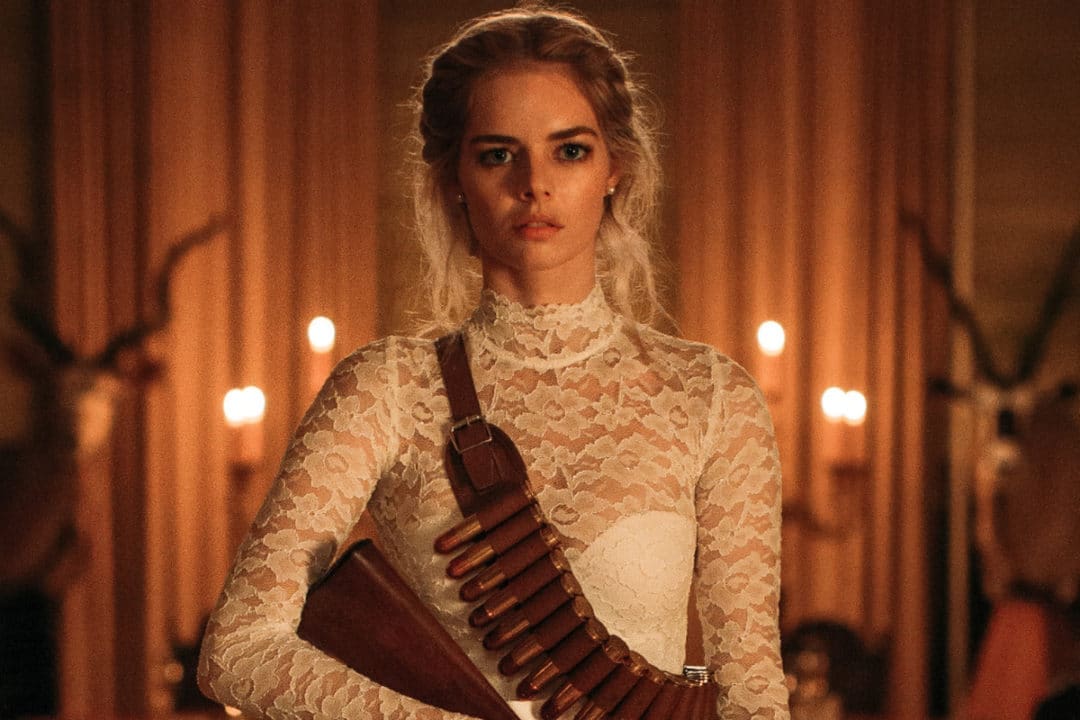 One of the most pleasant surprises of 2019, from Matt Bettinelli-Olpin, Tyler Gillett, Ready or Not is a pulse-pounding horror-filled adventure from start to finish. It follows newlywed Grace (Samara Weaving), who “must now hide from midnight until dawn while her new in-laws hunt her down with guns, crossbows and other weapons. As Grace desperately tries to survive the night, she soon finds a way to turn the tables on her not-so-lovable relatives.”

Read Nightmare on Film Street’s full review of Ready or Not. A dystopian film that analyzes class – and with food! No, it’s not Soylent Green, it’s The Platform from director Galder Gaztelu-Urrutia. “In the future, prisoners housed in vertical cells watch as inmates in the upper cells are fed while those below starve.” With cold, sparse sets and high claustrophobic ceilings, we learn just how deep humanity will go. Does trickle-down economics work? Is capitalism the answer? The Platform serves an opinion or two.

Read Nightmare on Film Street’s full review of The Platform A silly, heartfelt comedic horror faring from Ireland, Extra Ordinary, from directors Enda Loughman and Mike Ahern, follows “A woman who has supernatural abilities must save a possessed girl. Though driving instructor Rose has a love-hate relationship with her abilities, she decides to help Martin and his daughter Sarah.” Sweet, silly, and with actor Will Forte at his peak, Extra Ordinary is pure, ghostly fun. The suburbs get surreal with Greener Grass, from writers, directors, and stars Jocelyn DeBoer and Dawn Luebbe. “Soccer mums Jill and Lisa compete for approval and acceptance in a bizarre suburbia while their kids battle it out on the playing field.” Wonderful, hilarious, and oh so strange, your teeth will hurt from awkward laughter by the time the credits roll.

3. The Vast of Night

The days of radio are alive and thriving in director Andrew Patterson’s The Vast of Night. A cinematic and immersive feast, the film follows “two kids search for the source of a mysterious frequency that has descended on their town.” Tune in and disappear in the expert storytelling of days past. Hooh boy. A haunting treat for the horror anthology fan, The Mortuary Collection from writer/director Ryan Spindell is a sure crowd-pleaser. “When a young girl attends a funeral in an old mortuary, she stumbles upon a secret room full of curiosities where she meets the towering, ominous mortician. He guides her through his collection, sharing four stories of wild, unique, and memorable deaths.” As soon as I can get my hands on this one, it might never leave my dvd player. Surreal, strange, and absolutely stunning, Peter Strickland’s In Fabric eluded me for most of 2019. When I finally caught it at the Sleepy Hollow Film Festival in October, it did not disappoint. “A lonely divorcee visits a bewitching London department store to find a dress to transform her life. She soon finds a perfect, artery-red gown that unleashes a malevolent, unstoppable curse.” A visual feast, a haunting story, and wonderful performances.

Read Nightmare on Film Street’s full review of In Fabric

Were you surprised? I sure was. Before I send you off to tweet, share, and recommend your own picks from 2019 – here are a few of my Honorable Mentions that didn’t quite make the top 10, but were amazing flicks in their own right – The Lodge, Crawl, Escape Room, Guns Akimbo, and John Wick 3: Parabellum.

Before you go – thank you for being a part of the Nightmare on Film Street community in 2019. Jon and I appreciate every listen, review, pledge, download, tweet, follow, and share. We’re so grateful to be a part of this community, and we wouldn’t be able to create podcasts, reviews, and articles, without our amazing Contributor team, our Patrons, and you – the FIENDS!