BLACK MIRROR Will ‘Be Right Back’ For 5th Season Charlie Brooker’s terrifying portent of a possible future reliant on technology will broadcast via Netflix at a date yet to be revealed, but a (very) short teaser has been released, which you can watch below. For those who’ve not indulged in the singular pleasures of the mirror black, the anthology series takes the user on a journey that can veer from the desperately bleak to the joyously uplifting, with a focus always on the human use and growing addiction to technology, and how this may become the crutch that destroys, or saves us.

As Brooker puts it, the stories are about: “the way we live now – and the way we might be living in 10 minutes’ time if we’re clumsy.”

Vulture recently ranked each episode of Black Mirror from best to worst with Be Right Back, from Season 2, starring Domhnall Gleeson and Haley Atwell, coming in at number 1. Interestingly, the teaser end with the words ‘be right back’, so theories abound on the internet whether Season Five will attempt to somehow continue the story.

For all you horror fiends, who need a Charlie Brooker television fix, seek out his brilliantly apocalyptic Zombie outbreak series, Dead Set, from 2008.

Meanwhile, Black Mirror: Volume I: A Literary Season is due out in March in the UK. The book contains “new, original, darkly satirical stories that tap into our collective unease about the modern world”. Amazon states that the book will be available to US customers in 2025, but that can’t be right. Can it?

Check out the short teaser below:

* Watch Part Two of the Black Mirror Christmas Special. The episode, featuring an artificial intelligence home device, was originally filmed before Amazon or Google’s were on general sale. Scary stuff. 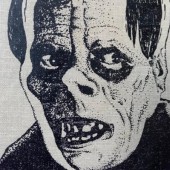