[Dead At The Drive-In] Foul Fishes and Death Wishes: THE CREATURE FROM THE BLACK LAGOON and PIRANHA

Howdy Drive-In Fiends!!! I’m back after a brief hiatus and I must tell you I couldn’t have picked a better, although still terrifying, time to return. News has been popping up here and there in the vast hellscape that is the internet of a certain trend that is making a comeback due to the era that we now find ourselves: the Drive-In Theater.

While the theater business as a whole is facing a very rough time economically, the Drive-In is better equipped to weather the storm as far as social distancing and with limited communal areas, keeping clean and disinfected is a more manageable expectation. The Drive-In experience died out in all but a few remote pockets in the early 2000’s, and is a unique experience that I’m glad I was fortunate to grow up around, but it looks like it’s possible that going forward it may be the movie-going choice for many as we all start to pick up the pieces and return to some sense of normalcy.

I’ll take whatever good news I can right now. But while the future of the Drive-In is still cloudy lets take a trip back to the typical schlock fare of yesteryear with this month’s lineup: The Creature From the Black Lagoon (1954) and Piranha (1978)!

The Creature from the Black Lagoon (1954) 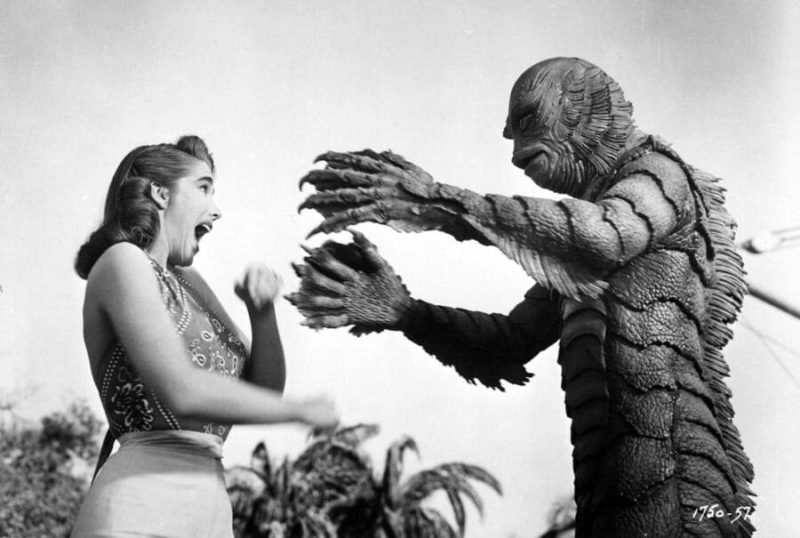 Chronologically the last of the main cast of “Universal Monsters” Gill-Man got to do something that the others did not up until then…grace the outdoor screen. The concept lends more impact to that atmosphere; lumbering rubber-suited monsters are a natural fit as well as the location seen throughout the film. It just makes sense.

Directed by Jack Arnold, and starring Richard Carlson and Julie Adams, Creature from the Black Lagoon was filmed in 3-D but most viewers saw the film in the more traditional “flat” viewing and that goes for the Drive-In as well. The story is a simple one; an expedition into the Amazon unearths evidence of a missing link between land and sea animals dating back to the Devonian Period over 360 million years ago. While investigating the area both above and below the water the expedition team is stalked by the one and only Gill-Man. While relatively tame the movie holds up after all these years and especially so in the beautiful, haunting scenes filmed beneath the waters of the lagoon. Two actors donned the suit, one for scenes on land and boat, but the underwater footage needed someone who could perform with the added weight while attempting to not sink and drown. This was handled by underwater cinematographer and stuntman Ricou Browning. The ability to wear all that added weight and still give off a believable performance continues to be incredible. While the main cast is usually awarded all of the accolades the actors that you don’t get to see are usually the ones doing the heavy lifting. Quite literally in this case.

“[The Creature from the Black Lagoon] is the perfect combination of classic Universal horror and 1950’s Drive-In fare.”

On the subject of deserving credit, there is a scandalous story behind the crediting of Gill-Man’s designer. Up until very, very recently (last year!) the iconic design credits were given to Bud Westmore who was the head of Universal Studios makeup department at the time. But the truth is that the credit belonged to Milicent Patrick. She began working for Universal in the late 40’s and is the person who actually designed the costume. Her role was quickly downplayed and changed and she was ultimately let go due to jealousy from Bud Westmore. It is a legitimate tragedy that not only did this happen but that she lived, and died, not being in the spotlight as she deserved to be.

Creature from the Black Lagoon would go on to spawn two relatively lackluster sequels, and even a run-in film with comedy icons Abbott and Costello, but nothing will ever top the original. It’s the perfect combination of classic Universal horror and 1950’s Drive-In fare. Although technically a low budget Jaws (1975) rip-off, Piranha (1978), directed by Joe Dante (The Howling, Gremlins) and produced by B-Movie legend Roger Corman, it was one of the best imitations according to Jaws director Steven Spielberg himself. That’s some high praise. While not as impactful as its inspiration this film did make a splash upon release and has gone on to develop a cult following. If you’re unfamiliar with this one, and if you are you’re missing out, the story goes as follows:

After the disappearance of two teenagers at an abandoned military facility an investigator uncovers a now-defunct Vietnam War project codenamed Operation: Razorteeth. This abandoned project was tasked with breeding a cold water-resistant strain of carnivorous piranha. Now out in the wild this swimming school of terror and teeth threaten the local water park and summer camp. Perfect!

“Released a few years after Jaws […Piranha] capitalized on the theme and momentum of the genre to moderate success.”

Aside from the talent producing and directing Piranha the film has some notable talent on-screen as well. Kevin McCarthy who played the role of Dr. Robert Hoak was known for a handful of appearances on the original The Twilight Zone (1960) as well as his most remembered role as the lead in 1956’s Invasion of the Body Snatchers.  Barbara Steele dominated the 60’s Italian Gothic horror scene and pulled double duty in the classic Black Sunday (1960). Belinda Balaski appeared in quite a few of Dante’s films including The Howling (1981) and both Gremlins (1984) and Gremlins 2 (1990) but in 1978 she was most known for her role in The Food of the Gods (1976) based on the work of science fiction author H.G. Wells. And don’t forget about Dick Miller (Explorers, Death Race 2000)!

Released a few years after Jaws and at almost the same time as that movie’s sequel, it capitalized on the theme and momentum of the genre to moderate success. While admittedly the effects and acting were not doing the film any favors the reason behind its appeal is that it doesn’t take itself too seriously. Sometimes not at all. The piranha attack scenes are comical at times but were intended to be. The over-the-top nature of them matches with the over-the-top nature of the film and horror films as a whole. I mean c’mon, killer mutant fish!? Like many of Dante’s flicks there is a satirical edge to them and Piranha is no exception. The film is also very aware of its predecessor and makes no effort to hide that fact. In a genre built on subtle imitation in its best moments and borderline copyright infringement in its worst this film finds a happy, gory middle ground.

That does it for this month! Let us know what your summer Drive-In plans are in the comments, over on Twitter and in the Horror Movie Fiend Club over on Facebook!