In writing this piece on writer-director Vincenzo Natali (Cube, Splice), it’s prudent of me to disclose that I’m a card carrying fanboy. From the moment I saw his 1997 directorial debut Cube, I was enthralled by his entrapping visual style. At a time where American independent film found a new awakening with all things Tarantino and Gus Van Sant, my teenage self was enthralled by the potential of Canada being home of such a unique and compelling indie filmmaker. Whereas Atom Egoyan became Canada’s dramatic darling that year with the Academy Award nominated film The Sweet Hereafter, it was Cube that resonated most deeply with my own sense of angst, confusion and curiosity about so many unknowns.

A product of the Canadian Film Centre’s Feature Film Project, Cube is critical in understanding Natali’s body of work. Whether it be feature films or television, Natali’s connection to metamorphism, metaphysics and an overall anxiety of one’s true self are constant themes. From Splice, a Frankenstein-esque film about the power and consequences of science, to episodes of Lost in Space and Hannibal, to appreciate Natali is to wonder about what scares you and the fears percolating within the shared subconscious. This is to say that with Natali comes a rich appreciation for horror and sci-fi.

“…there is a comfort in what is known of King but also something cathartic, because as a writer he very concerned with the mythology of America and it’s dangers.”

It’s with all of this that I feverishly anticipate his latest feature film In the Tall Grass, arriving on Netflix on October 4. Written and directed by Natali, In The Tall Grass is an adaption of the Joe Hill and Stephen King novella of the same title. Although an adaptation, this film feels like a next phase in Natali’s career. As the poster alone illustrates, In The Tall Grass is a loud recognition of his auteur voice. In fact, when speaking with Natali over the phone for this piece, I made mention of the poster and a sense that this film feels like a new chapter in his diverse career. His quiet and humble response of “it’s definitely pretty cool” was so Canadian in it’s politeness but his gentle and generous character seems to be in contrast with his visceral horror sensibilities. However, like true horror that rises from the quiet, Natali’s creative and critical voice is unmistakable. As In the Tall Grass continues Netflix’s King collection (Gerald’s Game, 1922), this new film with all of its mazes, fits perfectly within Natali’s catalog of mind-bending horror.

In asking Natali about this next career step, Natali commended both Stephen King and Netflix for the openness and autonomy they provided in the making of the soon-to-be streaming film. As Natali shared, “Contractually Stephen King has a lot of say when an adaptation of his work is happening, but I didn’t experience him exercise those controls. I got the feeling that he sort of allows people do what they want, which is pretty cool. I never felt restricted in any way, which was really amazing of him“. 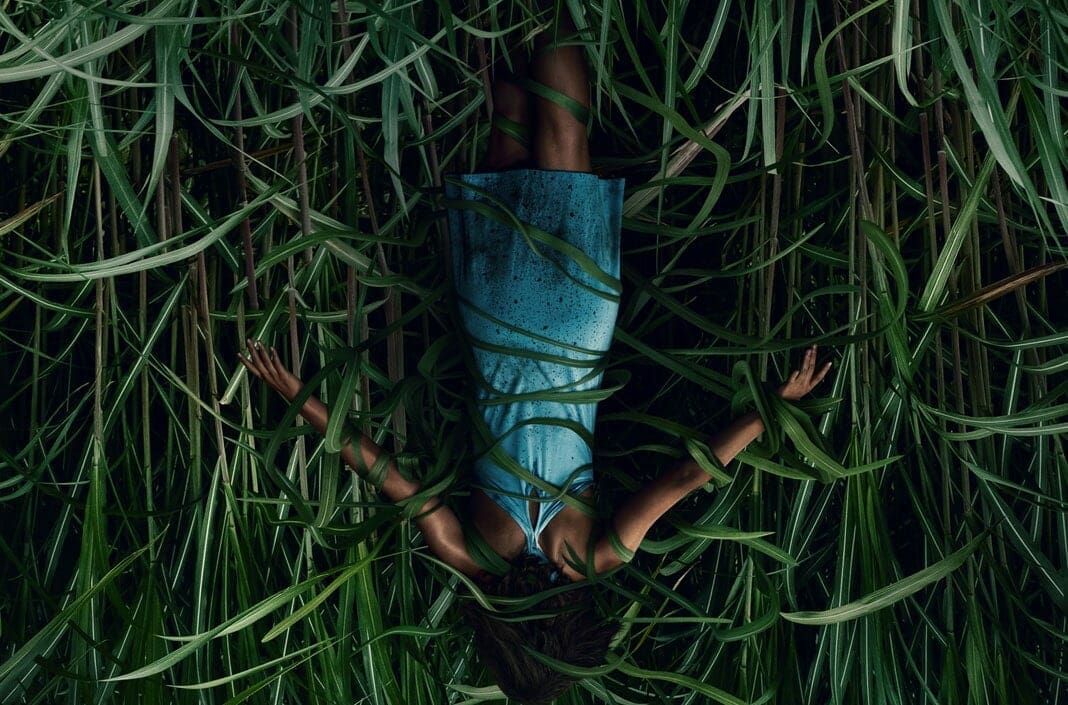 As the conversation about Stephen King and his brand evolved, Natali shared an interesting story of developing In The Tall Grass before the release of IT in September of 2017 and before Netflix was on-board as a financier and distributor. “….people oddly didn’t seem impressed by the Stephen King brand. I was told by an executive, and didn’t believe this, but it was said that Stephen King’s name really didn’t mean anything. Now, when IT arrived in theatres, there was this watershed moment that everyone remembered how important and great of a writer King is and how much his stories connect with people […] there is no question that In The Tall Grass happened because of IT and because of the two very well received movies Netflix produced prior. Those being Gearld’s Game and 1922.”

Furthermore, and ever aware of the horror genre’s cultural sensibilities, he also credited Donald Trump with the resurgence of the King brand within the shared popular conscious. “Culturally, I think Donald Trump is responsible [….] people look at Stephen King works with a fear and nostalgia, so there is a comfort in what is known of King but also something cathartic, because as a writer he very concerned with the mythology of America and it’s dangers. Just look at the Dead Zone, [which] has a very Trumpean character in its own right“.

“although the folks at Netflix had their notes on my script, they really allowed me to make the movie I wanted.”

Recognizing that the horror genre popularity arrives at a unique time, Natali also reflected on the production process. He warmly asserted that working with Netflix was a complete pleasure as this type of mid-size movie is not very often made by the big Hollywood studios and if they are, the process is not necessarily a smooth or artistically fulfilling one. Although the preparation of the shoot was complex, since the filmmakers were relying on real grass to grow, Natali shared that everyone was incredible to work with.  Specifically, he noted that “although the folks at Netflix had their notes on my script, they really allowed me to make the movie I wanted.”

As the film arrives on Netflix on October 4th, I can’t help but have the sense that this is truly a new beginning for Natali. Like write-director Michael Flanagan (Gerald’s Game) who had an established relationship with Netflix before moving onto writing and directing Doctor Sleep, In The Tall Grass may just be the start of a new chapter within an already distinguished directorial career. Personally, I look forward to getting lost in The Tall Grass and to see what Natali comes up with next.

Directed by Vincenzo Natali (Cube) and adapted from a novella by Stephen King (Maximum Overdrive) and Joe Hill (NOS4A2), In The Tall Grass stars Laysla De Oliveira (Locke & Key), Avery Whitted (The Vanishing of Sidney Hall), Patrick Wilson (The Conjuring 2), Harrison Gilbertson (Upgrade), and Will Buie Jr. Are you excited for Vincenzo Natali’s Stephen King/Joe Hill adaptation In The Tall Grass coming to Netflix October 4, 2019? Let us know on Twitter, in the Nightmare on Film Street Subreddit, and on Facebook in the Horror Movie Fiend Club! 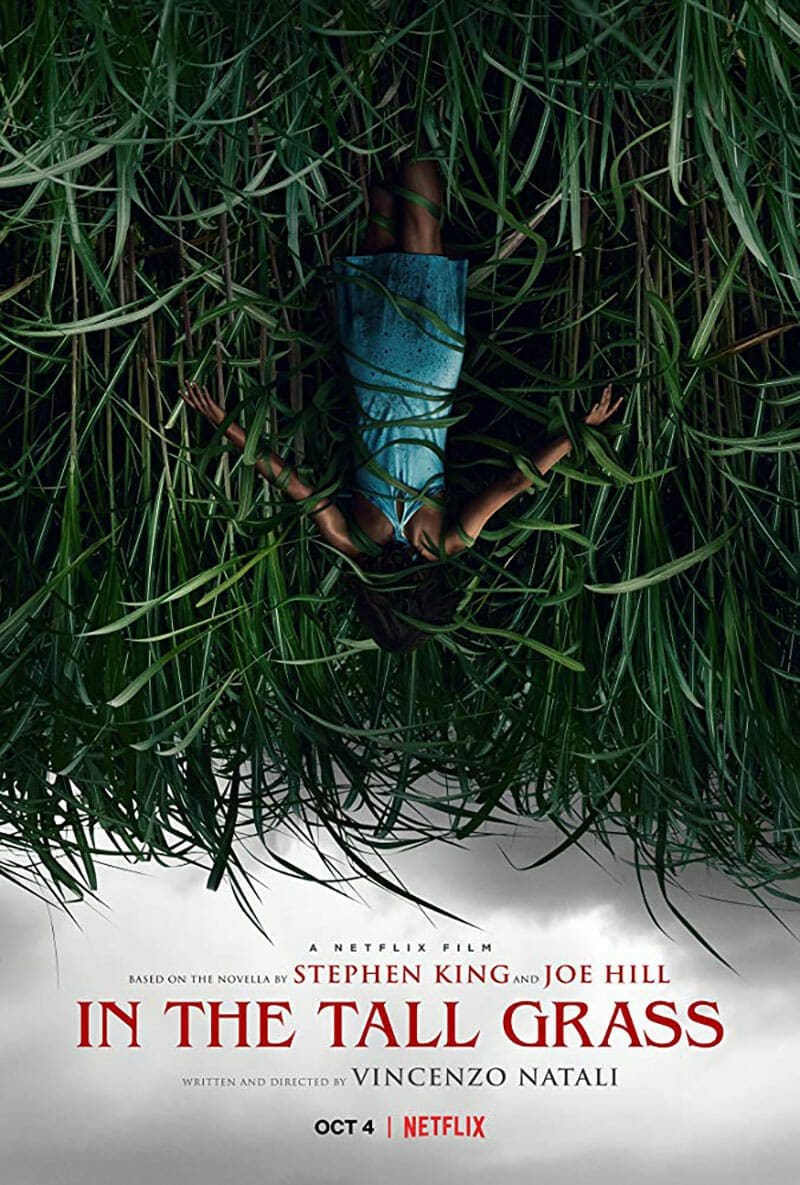