You may know Andrea Subissati as the Executive Editor of Rue Morgue Magazine, as a writer, and some of you may even know her as Lady Hellbat, but when I think of her my mind is immediately met with her work as co-host of The Faculty of Horror podcast. Andrea has contributed so much to the genre, but I will always think of her as one of the women who helped me discover horror academia and then directly influenced me to work my own way into it. Prior to finding the horror community and writing for this incredible team, my reflections on horror films resided only within my own thoughts. I often explored themes, topics, and details within myself until I was introduced to the podcast upon a close friend’s referral.

After I consumed hours of her topical, well-researched commentaries alongside Alex West, I felt as if I had stepped through a grand doorway and was freshly greeted by all of the material I once resigned to discuss and dissect alone. Craving more content and discussion, I came across a new podcast hosted by two equally incredible co-hosts looking for people to contribute exactly what Andrea had indirectly inspired me to do. The rest is history still being written, literally.

I am not the only one influenced by Andrea Subissati’s creative applications of horror analysis. As a select speaker at 2020’s Final Girls Berlin Film Festival, she has used her voice to aid and encourage the horror genre industry’s mass of upcoming talent. The festival itself is dedicated to horror productions submitted by women and non-binary filmmakers. Their welcoming definition of women “includes anyone with female experience –past or present– and is trans-inclusive. Anyone who feels addressed by the term is welcome to submit their films to the festival.” Admiring her contribution to the appreciation, knowledge, and support of the genre, I asked Andrea to share the details of her role as one of this year’s guest speakers and her thoughts on women’s place in horror as well as her own.

“…events like the Final Girls Berlin Film Festival really serve to illustrate that there is plenty of high-quality horror fiction coming from women and non-binary folks.”

Jessica Rose for Nightmare on Film Street: For those of us who couldn’t attend, could you give everyone a brief summary of your participation as a speaker at The Final Girls Berlin Film Festival?

Andrea Subissati: I gave two talks at Final Girls Berlin Film Festival this year – I did a lecture called “As God is My Witness: Martyrdom in Modern Day Horror”, which is based on a chapter I contributed to a new book entitled Scared Sacred: Idolatry, Religion and Worship in the Horror Film (available now for pre-order from holpublishing.com). I also did an informal “industry talk” where I explained some of the processes behind putting together the magazine. I had intended it to be a useful workshop for emerging horror filmmakers and journalists – some inside information on how to approach pitches and press releases. I know it can be daunting to break into the industry!

NOFS: What does being part of The Final Girls Berlin Film Festival mean to you? Why do you think it’s such a special event?

AS: I think events like the Final Girls Berlin Film Festival really serve to illustrate that there is plenty of high-quality horror fiction coming from women and non-binary folks. Plenty of it, and it needn’t be relegated to the margins as if it’s super-niche or a “special interest” topic. It’s so refreshing to see these perspectives be the focus of a festival – it’s a vibe you can feel between screenings as well. 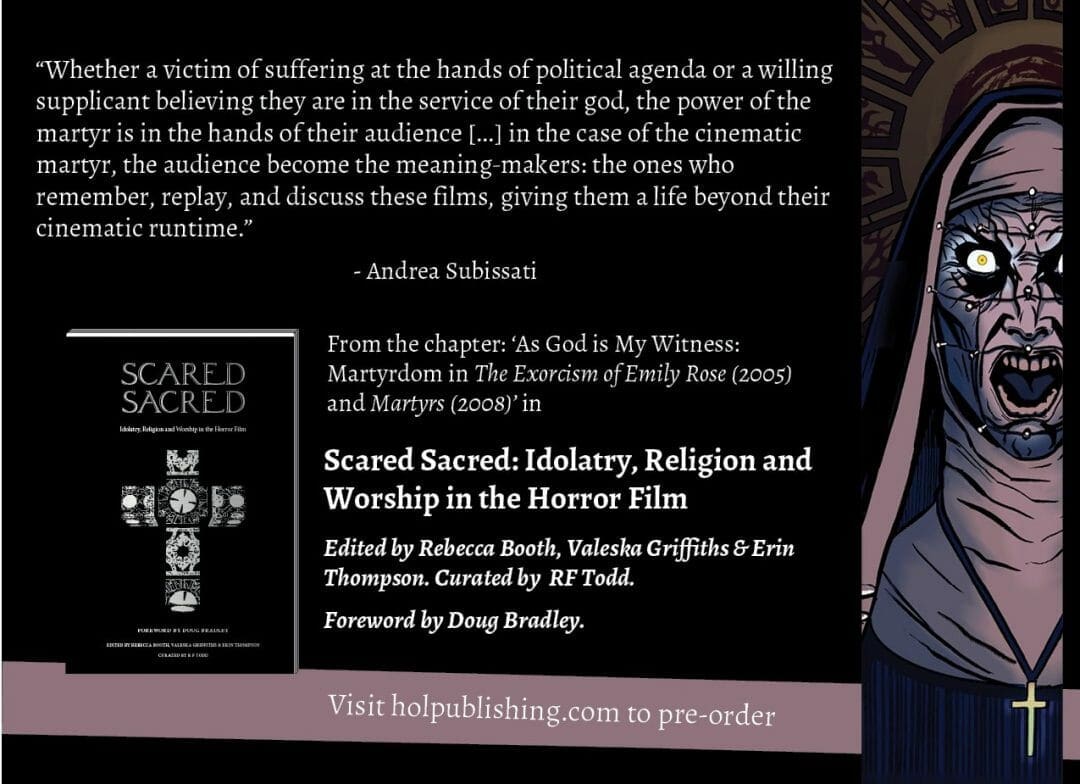 NOFS: What do you think about the films and shorts presented at this year’s Final Girls Berlin Film Festival?

AS: I am over the moon that they screened Mary Harron’s Charlie Says – I’ve been screaming about it from the rooftops since the Blu-ray landed unceremoniously on my desk last summer. It is simply fantastic, and I don’t understand why it didn’t make a bigger splash in the horror world. Swallow and Hail Satan are also excellent. Some of the shorts in the “MeToo” block will haunt me for many days to come!

NOFS: Is there any specific kind of message you hope audiences take away from the Final Girls Berlin Film Festival’s features?

AS: Not a specific message more so than an overall vibe. It’s so nice to appear at a fest and not be asked if you’re an actress or a filmmaker’s girlfriend, you know? Not that there’s anything wrong with being either of those, but it’s a different feeling when there’s such diversity being represented in various creative roles.

NOFS: What do you enjoy the most about your own personal role within the horror genre and community?

AS: I’m just so excited to be part of it while all these great, inclusive events are happening. Horror has been a white men’s game for a long time, and events like Final Girls Berlin Film Festival weren’t around when I got into the industry. It’s an exciting time to be part of it all!

“I’m just so excited to be part of [the horror community] while all these great, inclusive events are happening.”

Have you been following the features of the Final Girls Berlin Film Festival? What do you think of Andrea Subissati’s commentary on women in horror, both in front of and behind the camera? Let us know your thoughts over on Twitter, Reddit, or in the Horror Movie Fiend Club on Facebook!