Lifetime movies are ubiquitous with a certain style. Just referencing the channel conjures up images of pretty actors giving stilted performances, generic mansions in the Hollywood hills, and that special sheen that comes from mixing digital cameras and flat lighting. From the outside, this vision of Lifetime’s low-budget thrills can give the uninitiated the impression that these movies are bad, or somehow unworthy. Exploitation on the Airwaves seeks to reframe these all-too-frequent conversations to give Lifetime movies the respect they deserve, while still reveling in all the more outrageous aspects that make these stories so special. And there isn’t a better example of this intersection of impressive and outlandish than Psycho Stripper (2019).

In Psycho Stripper, Amber (Karissa Lee Staples) is just a week away from marrying Owen (Mark Hapka), the man of her dreams. From the opening moments at her bridal shower, it’s clear that Amber is well loved. Her friends dote on her, saying she’s a sweet bride “in a city of bridezillas,” and it’s true. When Maid of Honor Taryn (Rachele Brooke Smith) tries to convince her to open a naughty gift in mixed company, Amber politely declines. Even as her big day approaches, it’s clear the bride-to-be’s focus is on her guests. But after all the cake is cleared and the naughty gifts have been tested, even the blushing bride is ready to let loose at that evening’s bachelorette party.

Psycho Stripper’s opening scenes unfold in a fairly traditional way for a Lifetime film: characters are introduced, desires are detailed, and plans for the main character’s idyllic future are laid bare. And yet, with the arrival of the titular psycho stripper, Hunter (Tyler Johnson), the movie begins to morph into something much closer to a modern-day giallo.

After blindfolding Amber, Taryn takes her to the secret location of the bachelorette party, which turns out to be the dance studio the duo co-own. All of Amber’s female friends are in attendance and ready to celebrate. In fact, they’re so excited a group of them break out into a choreographed dance. However, it’s not long before the ladies-only gathering gets a dose of testosterone in the shape of three male exotic dancers. Amber is reluctant but—bolstered by the enthusiasm of her friends—she endures a short lap dance from a sexy fireman wielding a suspiciously realistic ax. It’s all in good fun after all.

As the party rages on, Amber takes a break from the action and just so happens to run into her private dancer. At first, she tries to excuse herself from casual conversation, but the dancer doesn’t seem to be picking up on her subtle hints. Instead, he tells her about himself with cheerful confidence. He’s nice enough, but there’s something hungry in Hunter’s gaze. He’s interested in her. Too interested. While the bride’s friends heat up the dance floor, they are blissfully unaware of what the audience can see so plainly: a psycho stripper has entered the scene.

Psycho Stripper writer/director Jake Helgren wastes no time in revealing his film’s Italian influences. While scenes that take place during the day adhere to the classic Lifetime style, nights are tailored to mirror those found in films by directors like Mario Bava and Dario Argento. Basic camera setups are traded for longer tracking shots; natural California sunshine gives way to precisely saturated, high contrast lighting. Even before a drop of blood has been shed, genre lovers will pick up on the subtle groundwork Helgren so carefully lays.

With the night’s festivities concluded, Amber directs her attention to her impending nuptials. But the blushing bride’s warning bells start going off when Hunter begins showing up more and more regularly. First, he signs up for her ballet class. Then he’s asking to take her to lunch. When her bridal book goes missing, Hunter not only finds it, he returns it to her home. For a while Amber is able to compartmentalize his attention. Maybe it’s just a harmless crush? But what seems like mere infatuation is revealed to be more when this psycho stripper-on-a-mission crashes the couple’s rehearsal dinner to make a shocking announcement: Amber belongs with Hunter. As the bodies begin to pile up, it’s clear there’s an agenda behind Hunter’s passion. But what caused his bridal obsession? And how far is he willing to go to get what he wants?

“While Lifetime’s threshold for violence remains low, there’s no limitation on style, and Helgen uses the latter to perfection throughout the film.”

Giallo films are known for their grisly scenes of horrific violence, killer visual style, and mysterious villains—three things that can rarely be said of Lifetime films. The channel is famous for its light touch approach to bloodshed, its straightforward shooting style, and a near complete lack of mystery. Almost every Lifetime movie title tells viewers exactly who the baddie is going to be, and Psycho Stripper is no exception there. But while the movie may not keep the killer secret, Helgen didn’t shy away from pushing the envelope by heightening the aesthetic and pushing the boundaries of permissible basic cable brutality.

The most notable nod to the giallo comes at the conclusion of Psycho Stripper’s second act. In a rush to make the rehearsal dinner on time, the bridal party leave one friend behind at the salon to retrieve Amber’s wedding gown. Unfortunately that friend had made no mystery of her misgivings about Hunter. As she walks through the empty room, the camera cuts to reveal a gloved hand grasping a pair of scissors. With the murder weapon established, the camera switches to the killer’s point of view allowing the viewer a front row seat to her inevitable doom.

Legendary giallo director Dario Argento began exploring the killer POV as early as 1969 in his film The Bird with the Crystal Plumage; and Mario Bava wasn’t far behind with Bay of Blood (1971). But the technique really hit its groove in the gialli-sphere in 1975 with Argento’s Deep Red. In Deep Red, images of black-gloved hands and closeups of terrified victims have been tuned to the point of perfection through careful editing and more than a little blood. Psycho Stripper’s POV scene is brief by comparison, at no more than sixty seconds of the movie’s ninety-minute run time. And yet, this mini homage is both effective and memorable. As Hunter disposes of the bloody murder weapon into the open hand of an unsuspecting homeless man, viewers are left with an unsettling revelation: the channel that has always championed the hero just placed its audience behind the eyes of a killer.

While Lifetime’s threshold for violence remains low, there’s no limitation on style, and Helgen uses the latter to perfection throughout the film. Rather than focusing on extended kill sequences destined for the cutting room floor, Helgen lets his film act as Lifetime’s counterpart to the giallo through beautiful visuals. At the top of the film, the classic Italian film’s saturated reds and blues have been traded for pastel pinks and periwinkles, but all that changes as the protagonists prepare to face off against the psycho stripper for a final time.

Helgen’s camera floats through the silent house at night. Amber wakes, certain she’s heard something outside. She walks down the dimly lit staircase as the camera tilts dangerously. The kitchen is bathed in crimson light as she moves toward the backyard. Hunter is standing in the pool, his skin glowing purple as the scarlet brilliance from the house collides with the cobalt luminescence outside. He turns to take in his prize as Owen’s lifeless body floats beside him. Then, a cut back to daytime as Amber awakes from her nightmare.

“[…] there isn’t a better example of [Lifetime’s] intersection of impressive and outlandish than Psycho Stripper.“

Dream sequences have been a part of horror movies from the very beginning, but no sub genre has been as successful at blurring the line between the realms of waking and sleeping than the giallo. Films like Suspiria and Lizard in a Woman’s Skin defy viewers expectations by working simultaneously as reality and hallucination. Bound by basic cable constraints, Psycho Stripper can’t quite take it as far as these seminal works, but as the killer is vanquished and the heroes ride off into the sunset, you may just feel that familiar sense of unsettled satisfaction.

Have you taken a dive into Lifetime’s Modern Exploitation catalog? What are some of your favorite trashy movies? Let us know all about your made-for-tv movie obsessions over on Twitter, Reddit, and in the horror movie fiend club on Facebook! For more horror straight to your inbox, be sure to join the Neighbourhood Watch! 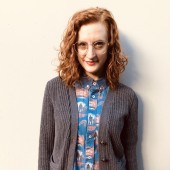 Adrienne is a writer and editor from Seattle. Her work has been published around the web (Nightmarish Conjurings, Addicted to Horror Movies, Woot!) and for institutions including the Museum of Pop Culture and the 5th Avenue Theater. When she is not writing about horror, she’s staring out the window thinking about commas as a production editor for both fiction and nonfiction books.