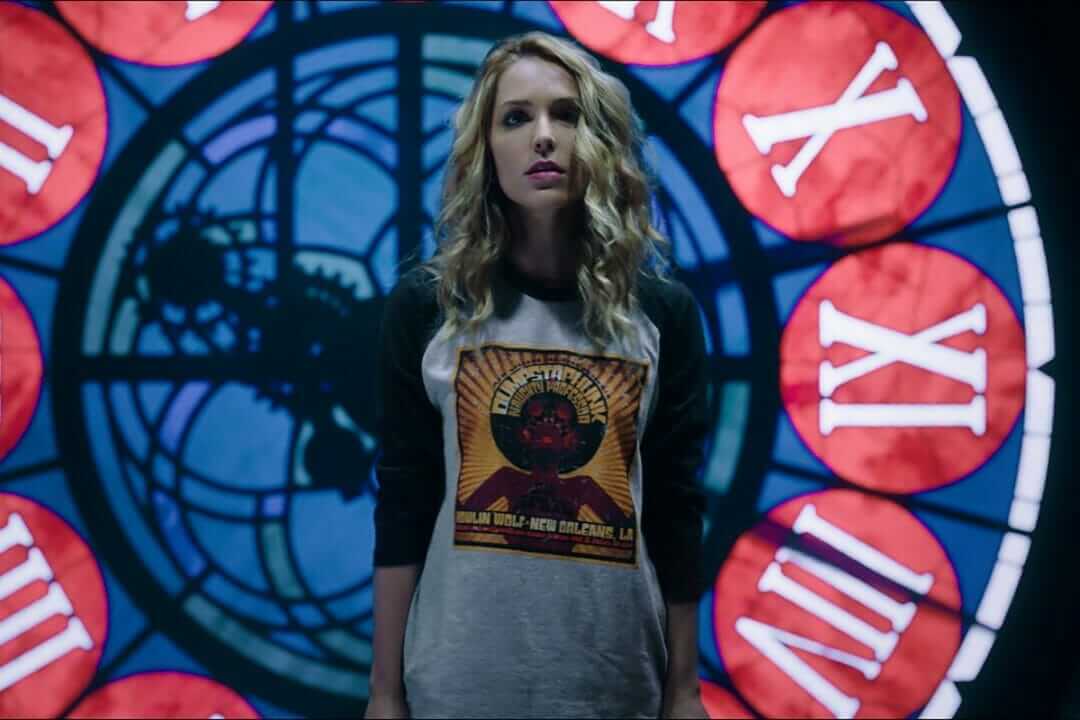 Styles come and go. What is all the rage in one decade (say, bell-bottoms and exploitation films in the ’70s) may be a complete disaster in another (see: the late ’90s, when mom jeans and PG-13 slashers were king). But there are occasional looks and themes that are innately classic, designed to float flawlessly through time and stay in permanent rotation in your closet and/or your watch list.

“A horror-comedy twist on Groundhog Day, it is the genre equivalent of fast fashion. Cheap and cheerful…”

I’m not sure that Happy Death Day is the kind of slasher flick made to survive multiple decades and/or viewings. A horror-comedy twist on Groundhog Day, it is the genre equivalent of fast fashion. Cheap and cheerful, it’s got the illusion of freshness but underneath all the flash and flair, it’s got structural problems that leave its leading lady woefully unsupported.

Happy Death Day centres on a seemingly selfish (and secretly grief-stricken) college student Theresa “Tree” Gelbman (Jessica Rothe) destined to repeat the same day until she, well, dies. In the opening scene, Tree wakes up in a strange bed wearing nothing more than a long-sleeved concert tee. We quickly learn that this shirt, which features the band Dumpstaphunk, belongs to Carter (Israel Broussard, Into the Dark: All That We Destroy), the boy Tree may or may not have slept with last night. What’s more, this shirt will become an unexpected supporting character in Tree‘s journey of self-discovery. College is often seen as a time for experimentation, an opportune time for young people to make mistakes and come into their own. But for many young women like, it’s a trying time of transition, filled with gendered judgments about their appearance and behaviour. Happy Death Day knows this and uses it to drive Tree‘s narrative to mixed results.

When Tree realizes where she is in the opening, she is repulsed, pulling on last night’s outfit (sparkly tank top, black trousers, heels) before doing the so-called “walk of shame” back to sorority house Kappa Pi Lambda. After some harsh judgments from her sorority sister Danielle (Rachel Matthews, niece of director Christopher Landon), Tree goes through the motions of her typical day, all while wearing variations on the North American college girl uniform including the cheeky, but ultimately inoffensive off-the-shoulder sweatshirt (for class); the delicate, flirty blouse (for meeting up the professor she’s having an affair with); the roomy, yet fitted t-shirt and sweats (for getting ready to go out); and the low-cut sundress (for the house party where she’ll die the first time). Suffice it to say, Tree‘s got an outfit – an image – for every occasion. When Tree wakes up in Carter‘s bed again the next day after being murdered a mysterious, baby mask-wearing killer, she is confused and mildly horrified (as she should be). But as the time loop continues and she ends up back in that baseball tee again and again, something changes within her. She actually starts to embrace the reprieve from the endless cycle of daily criticism and veiled self-hatred. She starts to try new things, including new looks.

During a montage of her various “death days”, Tree is seen chopping her long, luscious hair off and dyeing it pink (very cute, IMHO). In another flash, she walks through the quad completely naked. At one point, she assumes a stereotypical tough girl look, pairing a cropped leather jacket with grey jeans and a low ponytail (also cute, to be honest). Tree has an inner makeover in Happy Death Day as well, coming to terms with her unresolved grief over her mother’s death while confronting her own morality. She grows not only by accepting herself, but also by embracing others. She finally answers her father’s call, which leads to a reconciliation between the two. She talks to the shy girl she’d been ignoring and defends a sorority sister who has been criticized for eating junk food. She tells a former bedmate that it’s okay to be gay. She allows herself to fall for the cute and nerdy Carter.

In this way, Tree is a fascinating heroine, a stubborn, sassy contrast to the typical Good Girl narrative that women are often expected to adhere to in slasher films. Sadly, the film’s climax, including the styling by costume designer Meagan McLaughlin (10 Cloverfield Lane), undoes it all like a loose thread on a skimpy sweater.

Happy Death Day ends with a twist that pits Tree against another woman over a guy (that aforementioned creepy professor), followed by an eye-rolling, yet inevitable kiss between Tree and Carter. And during all this, Tree retreats to Carter’s ratty tee from the opening scene (oh, and some comfy black leggings).

“Whether or not you like the sci-fi direction that film goes in, it’s hard not to admire Happy Death Day 2U‘s commitment to carrying Tree’s personality over into her closet.”

This choice might seem empowering, signaling that Tree has realized doesn’t have to adhere to any rules (in fashion or life) to succeed. But in a post-Buffy world, it is simply reductive to suggest that women have to stop caring about the way they look to be heroes of their own narrative. It transports us back to an era where a woman only deserves to survive or to be believed if she covered up. It is retro, and not in a cool way.

Sure, it might not have been sensible to have Tree fight off serial killer John Tombs (Rob Mello) or secretly sinister roommate Lori Spengler (Ruby Modine, Satanic Panic) in a mini skirt and heels. But she also could have worn something that was less of a stark contrast to her formerly fun and flirty self, beating Harley Quinn and the Birds of Prey to the punch in the comfy-meets-cute department. At the very least, Tree, a girl that accustomed to multiple costume changes in one day, could have worn her own oversized t-shirt to battle. Thankfully, Tree gets a second chance to dress her best in sequel Happy Death Day 2U, which came out last year. While she’s still seen in her signature topper at times, new costume designer Whitney Anne Adams (Piercing and The Eyes of My Mother) expands Tree‘s wardrobe to include swimsuits, colourful dresses, statement sweaters, and cropped jean jackets.

Whether or not you like the sci-fi direction that film goes in, it’s hard not to admire Happy Death Day 2U‘s commitment to carrying Tree‘s personality over into her closet. Its predecessor, however, remains a reminder that sometimes even the most seemingly fashion-forward people can, from time to time, fall prey to bad trends.