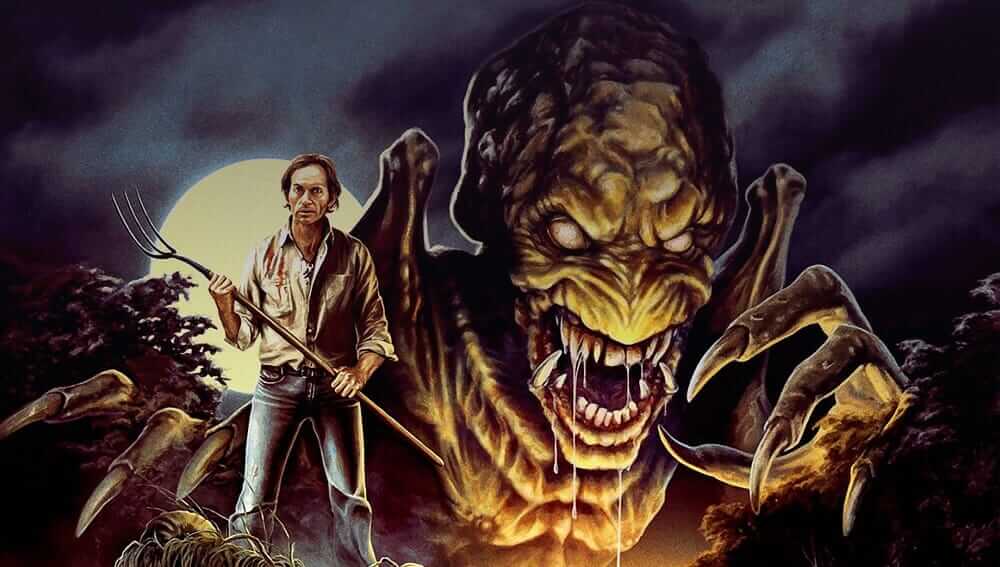 Fresh off his Academy Award win for Aliens, effects guru Stan Winston was already working on his next project. Horror fans learned the maestro of monsters was in the midst of his sole directorial debut, and considering Winston’s body of work, everyone correctly assumed it would be a creature feature. Winston and his team didn’t sacrifice story for makeup and design, though. The ambitious crew crafted a tale of terror that fully understands there is no reasoning when it comes to grief or tragedy.

“Keep away from Pumpkinhead,
Unless you’re tired of living,
His enemies are mostly dead,
He’s mean and unforgiving…”

What began as a poem written by Ed Justin eventually became the basis for Pumpkinhead. The De Laurentiis Entertainment Group (DEG) sent Winston the script thinking he would only be handling the special effects. Instead, he took a seat in the director’s chair and let his team — Alec Gillis, Shane Mahan, John Rosengrant, and Tom Woodruff, Jr. — supervise the titular monster’s design and physical portrayal. Winston believed in “on-the-job training,” and, according to Fangoria #70, he always provided “an opportunity to learn.” The “Pumpkinhead Pack” was made up young and enthusiastic men who had worked on past Winston works including Invaders from Mars, The Monster Squad, and The Terminator. On this special occasion, the artists were given more creative license than ever before. Their collective expertise was integral to keeping the movie well within its $3-million budget. According to his prodigies, Winston was wonderful to work with on set — there were no “family squabbles” among them. He was concerned with his first solo outing as a director, but he was also still willing to listen when his team had suggestions that would make the movie better. Pumpkinhead became a rite of passage for the effects crew who went to great lengths when it came to animating the statuesque demon. From radio-controlled mechanics to Woodruff himself wearing an uncomfortable harness whilst inside the Pumpkinhead suit, it was obvious this movie was a labor of love.

By the time Pumpkinhead was ready for the big screen, DEG was well on its way to bankruptcy. Their other movies from around the same time period suffered, as well; on top of being overshadowed by The Lost Boys, Near Dark was hardly promoted. DEG distributed Winston’s film elsewhere under one of its alternate titles (Vengeance the Demon), but United Artists handled its theatrical run in the U.S. The movie sadly did not fare well at the box office even with a Halloween-adjacent release date. Regardless, the movie’s lead and genre icon Lance Henriksen was approached for the sequel; he thought the script was lacking in “passion” and found it to be just a “product.” Be that as it may, three Pumpkinhead sequels were made without him and Winston.

Even though Henriksen was hesitant to star in the movie because of its title (Rue Morgue #81), he ultimately came around after reading more of the script. The film’s semiotic shorthand — the bucolic area and residents, the regional and supernatural folklore — suggests a Deep South setting, but filming largely took place in Los Angeles and Topanga, California. Knowing the intended locale, Henriksen asked for two fake teeth so he could look like someone who actually lived this hard, sun-dried life in middle-of-nowhere America. And working with young co-star Matthew Hurley (Billy) allowed Lance a chance at “personalizing” the paternal role. He drew on experiences with his own grandmother when working with the child actor. The movie opens with a scene that was not part of the first cut. During an early screening with Dino De Laurentiis in the audience, Winston noticed the producer was visibly displeased before his early exit; he wanted to see a monster “in the first fifteen minutes.” Winston accommodated him by adding a flashback that ties into the overarching story: Pumpkinhead is summoned by someone to kill a neighbor of young Ed Harley. This moment offered not only a glimpse of the film’s namesake, it also showed how people in this community kept to their own and let precarious matters handle themselves rather than getting involved.

Fast forward to the present and adult Ed (Henriksen) has his own son. They, along with their dog Gypsy — played by Mushroom, who is best remembered as Barney from Gremlins — have a routine life filled with what Henriksen referred to as “Southern ease.” The sun is hot and the work is hard, but seeing his child growing up in such a carefree environment is the best reward. Things change, though, when a group of city dwellers stop at the Harley‘s country store en route to their cabin getaway. While the initial plan was to give the teen tourists more backstory, Winston and his writers realized Ed was the film’s true main character. This decision to focus on him led to surface-level portraits of the young, cultural interlopers. However, their actions from here on out fill in the gaps: Tracy (Cynthia Bain) and boyfriend Chris (Jeff East) are sincere and kind, Maggie (Kerry Remsen) is emotionally stunted by the events to come, Steve (Joel Hoffman) habitually covers for his troublesome and coarse brother Joel (John D’Aquino), and Joel‘s girlfriend Kim (Kimberly Ross) is loyal to a fault.

The movie’s impetus is a dreadful accident that still haunts viewers to this day: Joel kills Billy while riding his dirt bike. Not knowing the circumstances surrounding his son’s death, Ed desperately seeks out the notorious Haggis witch (Florence Schauffer) who only a local bumpkin named Bunt (Brian Bremer) can lead him to. The sorceress then casts her magic so that the hellish embodiment of revenge itself is born. As Pumpkinhead kills every one of Tracy‘s friends, Ed viscerally experiences each murder through the demon’s eyes. He finally comes around and tries to save those he sought out to destroy. Written off by critics then as a mere creature feature, Pumpkinhead is really a powerful reinterpretation of a classic morality tale. This Southern Gothic update of any “be careful what you wish for” story finds Ed seeking immediate relief for his anguish. He technically isn’t the one killing these teenagers, but by bearing witness to Pumpkinhead‘s gruesome acts, Ed recognizes the flaw in vengeance’s design. When one senseless death begets others, the need for retaliation can’t be satisfied because no amount of bloodshed will undo what’s dead and done. Ed is struck by that painful realization through empathic pain and remembering how his own parents refused to help their neighbor. He regains what little of his humanity is left, even if it comes too late and at a high price.

Pumpkinhead is also accused of devolving into a simple teen slasher halfway through. The inclusion of youthful, would-be perpetrators isn’t a novel idea — from Prom Night to I Know What You Did Last Summer, horror has always sought retribution against guilty parties. Yet in Winston’s movie, he adjusts the formula enough to where things are familiar but not the same. Unlike in other films where the offenders make a pact to never come forward about their crime, Tracy and her friends are still working through their emotions when Pumpkinhead appears. No significant passage of time has passed since Billy died before the teens become lambs to the slaughter. Typical slasher movies may have their sad moments here and there, but Pumpkinhead is overwhelmingly steeped in pathos. Much like Ed, Joel experiences delayed remorse for his actions. He physically and emotionally strong-armed everyone into complicity, but upon seeing his brother and friends dying, Joel declares “I’m the one you want” to his supernatural stalker. The story comes full circle and the pain of incredible loss is felt on both sides. Death serves a purpose here other than padding the body count. It emphasizes the need for compassion even when the grief-stricken isn’t so understanding or responsive.

It comes of no surprise that someone with as much experience as the late Stan Winston turned in such a polished-looking debut. He was on multiple film sets throughout his career, and he dealt with enough people in the industry to know what does and doesn’t work in a movie. Winston’s restraint in not showing Pumpkinhead in every scene, or his ability to underline the story’s argument for empathy — this was all proof the effects expert was as capable behind the camera as he was designing anything shown in front of it. It is a letdown that Winston didn’t direct more horror features, but not every first-time director knocks it out of the park like he so clearly did with Pumpkinhead.

Pumpkinhead is currently streaming on Amazon Prime Video. Share your thoughts on the movie with the Nightmare on Film Street community on Twitter, in our Official Subreddit, or in the Fiend Club Facebook Group.