Frights Under The Radar: Horror Movies You DIDN’T See In 2020

2020, fiends. ‘Twas a year. Destruction was all over the place while we sat in our homes and engaged in uberbinging the genre that we love. While we binged on old favorites, the new content that was released throughout the year was at an all time high. A blessing and a curse, as there were a few releases that escaped our horror hungry retinas.

Honestly, has there ever been a year when so many films were released for our viewing pleasure? But no complaints! We had plenty of time to watch as much as we could. Here are a few gems that may still be buried under the sand in your world.

Darren Lynn Bousman’s (Saw II–IV) Spiral was one of the films that didn’t release this year, but we weren’t Bousmanless in 2020. His film, Death of Me, received a quaint On Demand release. It follows a vacationing couple (Luke Hemsworth, Maggie Q) who wake up one morning and discover a strange and violent video of the prior night. With a typhoon threatening to devastated the Thai island they are on and mysterious visions plaguing them both, the couple try to find a way off of the island as well as unravel the mystery of the video. Trippy sequences, icky snakes, and Bousman gore fill Death of Me’s cup. 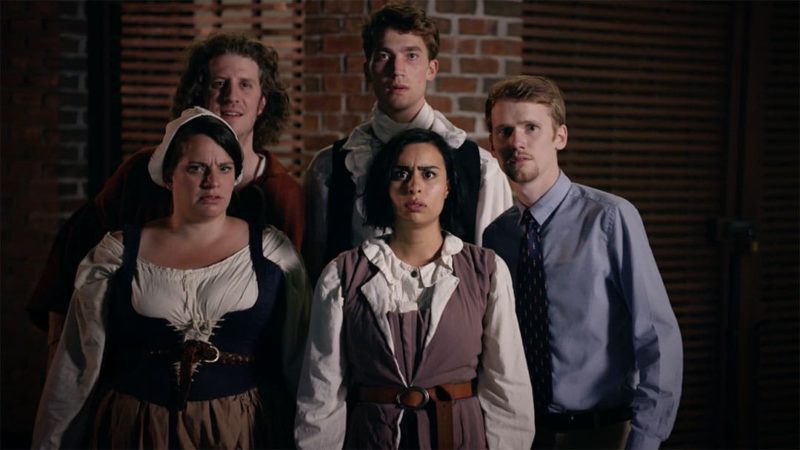 Mass Hysteria is brought upon by a small troupe’s annual Halloween performance of the Salem Witch Trials. Being locals, they expect the usual group of annoying tourists not appreciating their art. Leaving Salem for NYC’s theater scene after this performance, Paige (Geena Santiago) gets fed up with the unappreciative audience, and enacts a fake curse on one of the patrons. But oops, patron actually drops dead leading the tourists to create their own witch hunt against Paige and the other actors. If a horror movie has a performance theater type story involved, you can always count me in. If the film feels like an actual theater performance, count me even more in. Silly and sort of educational, Mass Hysteria may just go from under the radar to an annual Halloween viewing.

The Retreat (2020)
Available on Demand

Did you know that a Wendigo horror was released this year! Retreat follows wendigo lore almost to a tee as two friends (Grant Schumacher, Dylan Grunn) venture into the wilderness for a small bachelor party. The Wendigo takes over the psyche of Grunn’s Adam, and leads him down the path of greed, possession, and eventually cannibalism. Retreat introduces henchmen (or scary demon looking creatures who like to crawl run) to the Wendigo lore. It works. 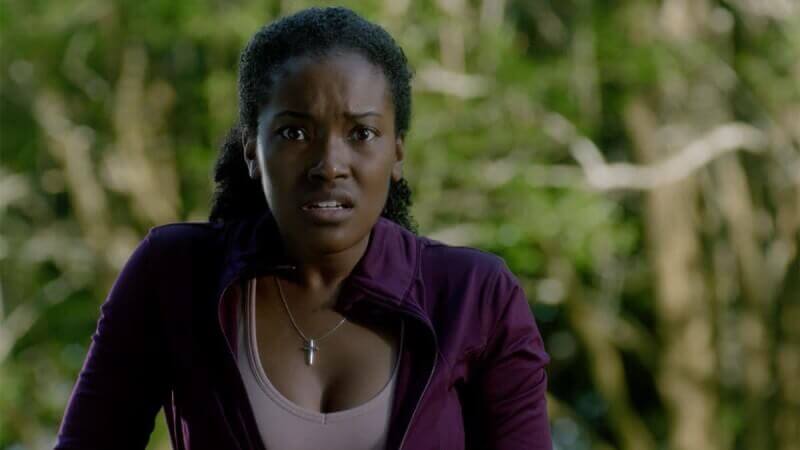 Jeffrey Riddick, writer of Final Destination & Final Destination 2, makes his directorial debut with Don’t Look Back. Caitlin (Kourtney Bell) is among a group of people who witness a man being beaten. As society does, this group did nothing to stop or help the man. Soon after, the group of witnesses begin to mysteriously die. Caitlin hurries to figure out what is happening to these people, and struggles with the aspect of karma in the same way that the teens struggled with death in Final Destination. Watch for the karma mystery, but stick around for the most satisfying twist in the film’s final moments. *chef’s kiss*

I recently gave thanks to Open 24 Hours for bringing back the use of all kinds of hammers in a slasher film. These hammers are put to brutal use throughout Mary’s (Vanessa Grasse) first graveyard shift as a gas station clerk where visions of her murderous ex begin to pop up. If you enjoy single location horror, hammers, and kick ass leads then Open 24 Hours is for you. Sidenote: Mary’s hallucinations were very Nightmare on Elm Street-esque, and I’ve added director, Padraig Reynolds, to my list of directors who could possibly do a Nightmare reboot justice.

More like, Why Haven’t You Seen This?! Why Don’t You Just Die is asked by a group of people who have all gathered in an apartment with different reasons to brutally off the other. The film is as if you took Crank (2006) and set it in a one bedroom apartment with the end goal being to cover every wall, piece of furniture, and the floor with blood while still managing to elicit humor and emotion. It’s absolutely balls to the wall crazy, and funny as hell.

Spell’s story is about a family whose plane crashes in the mountains of West Virginia. We follow the father, Marquis (Omari Hardwick), as he wakes up in an unfamiliar bed with his family nowhere in sight, and with a strange couple appearing to take care of him. Spell’s draw is Loretta Devine’s deliciously diabolical performance as Eloise, the matriarch of the house in which Marquis has been bedridden. Eloise may seem like she has good intentions, but underneath her smile is an ulterior motive for Marquis’ presence. A little bit Misery (1990) (watch for easter eggs), a little bit House of 1,000 Corpses (2003), and with a splash of dark magic, it’s a wonder Spell has to be put on this list.

Felt like 2020 was lacking on the vampires? Bit has you covered. Upon moving to Los Angeles, Laurel (Nicole Maines) is bitten by a vampire, and must decide between joining the undead or sacrificing herself. With a transgender lead joining a group of queer feminist vampires who preys upon the worst of the worst, Bit deserves more eyes on it. The lore within the film along with the depth of its characters deserves a sequel if not a TV series.

Attack of the Demons (2020)
Available on Demand

Attack of the Demons is an animated tale of a group of teenagers who must save their town from a horde of demon possessed people and animals. Logline, simple. Movie? Uhmazing. If you ever craved a 2D animated horror film that carries the maniacal air of The Evil Dead (1981) with a score that is synth heaven then get your eyes on Attack of the Demons. Director, Eric Power, and writer, Andreas Petersen, put their heart and soul into this wonder, and it shows in every animated bloody aspect.

So many movies in 2020! So many gems out there! Catch these when you can! Let us know what films you think floated under the radar on our Twitter, Reddit, Facebook, and in the official Nightmare on Film Street Discord. Not a social media fan? Get more horror delivered straight to your inbox by joining the Neighbourhood Watch Newsletter.