It isn’t rare for movies to find themselves in production limbo, and director Guillermo del Toro seems to be no stranger to this with his tentative project; Pinocchio. Guillermo del Toro released the first look of the stop-motion animation remake of Pinocchio back in 2012 (below), and we haven’t heard much of it since. In fact, del Toro has to get this film in production for 10 years. Later, he announced that Emmy winner Patrick McHale would help him write the screenplay.

When asked by IndieWire, del Toro had this to say about the project:

I’ve been looking for financing for almost ten years. We have the puppets, we have the design. I always or almost always complicate my life. None of the movies I want to do are easy. And they don’t belong to anything anyone wanted to do at that time.

No one wanted to do superheroes when I did ‘Hellboy,’ no one wanted to do monsters when I did ‘Pacific Rim.’ When I announced ‘Pinocchio’ I got many calls: ‘Yeah but it’s set during the rise of Mussolini, it’s an anti-fascist Pinocchio.’ [mimes they all hung up] If you have $35 million and if you want to make a Mexican happy, here I am.

There also seem to be dark and new elements in his version of Pinocchio, such as the classic sperm whale that swallows Pinocchio instead being a giant dogfish, and hallucinations involving black rabbits. On top of all that, the Blue Fairy is actually the spirit of a dead girl. Sounds like del Toro.

Del Toro offered a first look of Pinocchio, only to make audiences wait five years for any news.

Until he can find the funding for this re-imagining of Pinocchio, audiences can watch his new film, The Shape of Water (2017), which opens in theaters December 8.

Are you excited for del Toro’s unique take on Pinocchio, or will it join the unmade movie graveyard? Let us know your thoughts in the comments below! 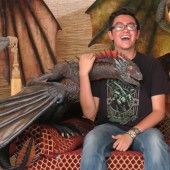