Author Mark Z. Danielewski is known for many things. The Fifty Year Sword, Only Revolutions (which was nominated for the National Book Award in 2006), and The Familiar series…but most notably he is the author of House of Leaves. If you haven’t heard of House of Leaves then today your life is going to change. This novel is unlike anything you will ever read in your life, and that’s a promise. The novel is an unnerving, headache inducing, masterclass in writing–that will leave you begging for more. And now it seems like we just may be in store for more insanity.

House of Leaves is an incredibly difficult novel to read, though that should not deter you. The difficulty adds to the atmosphere of the whole concept of the novel. Formatting this novel had to have been hell for Danielewski but that is where it derives its charm from. We are privy to multiple narrators, footnotes that have footnotes, footnotes referencing fictional texts and other media, pages with one word on them, and text that changes color (believe me, this is all important and deliberate and fascinating). The shear layout of the book will make you feel anxious and claustrophobic, which creates a reading experience unlike any other. The story behind the creation of Danielewski’s [magnum] opus is sad, to say the least:

“1990. My father was head of the USC School of Theater. I was living in New York. Then I got the phone call. The ‘Mark your father is dying’ phone call. He was in the hospital. Renal failure, cancer. I got on a Greyhound bus and headed west. Over the course of three sleepless nights and three sleepless days I wrote a 100+ page piece entitled Redwood. I remember using a fountain pen. I barely had the change to buy sodas and snacks along the way and there I am scratching out words with this absurdly expensive thing of polished resin and gold. I’d like to say it was a Pelikan, but I don’t think that’s correct. Another thing I seem to remember: the paper I was writing on had a pale blue cast to it. There was also something about how the pen seemed to bite into the paper at the same time as it produced these lush sweeps of ink. A kind of cutting and spilling. Almost as if a page could bleed. My intention had been to present this piece of writing as a gift to my father. As has been mentioned many times before, my father responded with the suggestions that I pursue a career at the post office. I responded by reducing the manuscript to confetti, going so far as to throw myself a pity parade in a nearby dumpster. My sister responded by returning later to that dumpster, rescuing the confetti, and taping it all back together.”

Recently Mark tweeted out the FULL LENGTH PILOT SCRIPT for a House of Leaves TV show, which has left fans (like myself) with our hearts racing. Not to mention a pretty remarkable follow-up tweet stating “[…] the show is definitely happening.” For the time being there seems to be no set date on a production so you have plenty of time read up if House of Leaves has been on your read-list for a while now.

Have you read Mark Z. Danielewski’s House of Leaves? Would you be interested in seeing a TV series based on the books? Let us know in the comments below, on Twitter, Instagram, Reddit, and in the Horror Fiends of Nightmare on Film Street Facebook group! 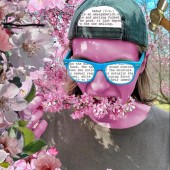