I Hate The Living: Stories From The Perspective of Ghosts Caught in limbo between life and eternal rest, ghosts have a unique perspective on stories about the living, who are going about their days without even acknowledging or even necessarily believing in ghosts’ existence. Ghosts can give us perspective from spaces that we can’t occupy while we remain alive, from the afterlife to hypothetical pockets of space between planes of existence. This list captures stories told specifically from Ghost POV, with bonus Ghostly Host Stats that pick out the traits that these storytelling perspectives may have in common. Thanks to Cole (Haley Joel Osment)’s ability to see dead people, no small amount of ghosts get to have their stories told through him. But Cole‘s struggles and triumphs are just a chapter in a story that’s really following Dr. Malcolm Crowe (Bruce Willis), the completely un-self-aware and very dead child psychologist who has made it his personal afterlife mission to help Cole navigate his abilities. Of all the ghosts on this list, Malcolm is probably the most regretful, constantly aiming to redeem himself for his failure to help a patient with abilities that echo Cole‘s.

Environment Interaction: None, or nearly none.

Visibility to Humans: Only Cole I’m so glad we live in a world where a live-action feature film from Casper (Malachi Pearson)’s perspective exists. For a friendly and fun-loving ghost, Casper‘s story is surprisingly sombre. We learn that he died of pneumonia when he was twelve and that his father passed away while trying to invent a Lazarus machine that would bring him back to life. In the afterlife, Casper is lonely, friendless and stuck with neglectful poltergeist uncles, until Dr. James Harvey (Bill Pullman) and his daughter Kat (Christina Ricci) arrive to try get Casper and his uncles to leave their home and cross over.

Environment Interaction: can pass through objects as easily as he can throw them across the room. This is your semi-regular reminder that Beetlejuice is barely about its titular character. Dead-but-still-darling duo Adam and Barbara Maitland ( Alec Baldwin and Geena Davis) are stuck haunting their own house, and we’re along for the ride as they stumble about trying to find the best ways to scare new homeowners away, from traditional bedsheet ghost spookiness to hiring scummy bio-exorcist Betelgeuse (Michael Keaton). If I could choose any ghosts on this list to have living in my home, it would be the Maitlands.

Environment Interaction: Their home is theirs to control.

Visibility to Humans: Yes, but please leave them alone. 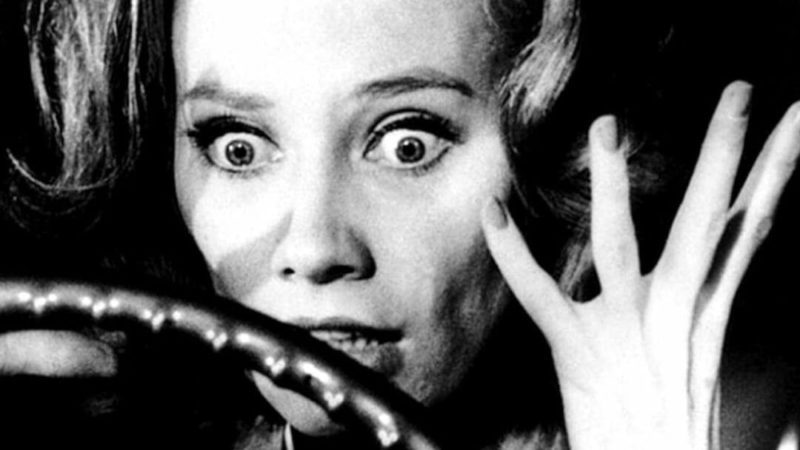 Mary Henry (Candace Hilligoss) doesn’t remember how she managed to survive the car accident that sent her vehicle flying off a bridge and into a river, and for good reason. Unaware that she’s dead, Mary takes us on a tour through her personal afterlife or limbo or peri-mortem nightmare, depending on how you interpret it, which filled with dreamy apparitions of ghouls, organ music, and a strange, abandoned pavilion.

Environment Interaction: Yes, given that her world is as real as she is.

Visibility to Humans: Seems to come and go. You could argue that Hell House LLC is told through the lens of the documentarians trying to piece together the story of what caused the nightmarish events that befell the haunted attraction held at the Abbadon Hotel five years’ earlier. I argue that the story belongs to Sara (Ryan Jennifer), allegedly the only survivor of the original Hell House crew. It’s the key footage that she provides and her unreliable interviews that shape how the filmmakers understand what really happened.

Environment Interaction: Unclear, but seemingly down to get physical with the world of the living. Lisa (Abigail Breslin) and her family have been reliving the day that they were murdered in their own home, Groundhog Day – style, since 1985, but Lisa is the only one who’s aware that they’re living their lives on loop. With her new awareness that she’s a ghost, Lisa realizes that the entity that killed her is still at large in the future, and that she has a shot at saving the living girl who now lives in her house.

Visibility to Humans: Unless he’s about to ascend to heaven, only psychics like Oda Mae. I Am a Ghost is an extremely pared-down story that follows Emily (Anna Ishida), who, like Lisa in Haunter is caught in a time loop haunting her own home. Unlike Lisa, Emily has a much harder time holding onto the fact that she’s a ghost and has to develop a therapeutic relationship with a clairvoyant in another time in order to admit to herself the realities of what led to her afterlife.

Environment Interaction: Her home, her rules. The framing device for this anthology film features five strangers stuck in an elevator stuck at a sub-basement level. The stories that the strangers share with each other are their own awful experiences. Honourable mention goes to earlier anthology series Tales from the Crypt (1972), which frames its stories with a similar premise.

If all you remember about this movie is the sexy pottery scene set to “Unchained Melody”, let me remind you that romantic supernatural thriller has some surprisingly spooky elements. When Sam (Patrick Swayze) dies, his ghost sticks around specifically to protect his girlfriend Molly (Demi Moore) from real, living harm. Ghost is really neat in that it shows Sam putting forth some real effort to learn how to be a disruptive poltergeist-like spirit in a world where the only being that seem able to perceive him are other ghosts and reluctant-to-help psychic Oda Mae (Whoopi Goldberg). The good news for Sam is that once he deals with his unfinished business, he can ascend to heaven in glowing Touched by an Angel fashion (how’s that for an extremely 90s pull?). Bad news is that, in this movie, if you’re a bad guy, shadowy demons will swarm you and drag you off to hell the moment your ghost separates from your body.

Visibility to Humans: Unless he’s about to ascend to heaven, only psychics like Oda Mae. Grace (Nicole Kidman) is just trying her best to keep house and take care of her chronically-ill children, but she isn’t helped at all by the fact that she’s convinced that her home is haunted. Between pianos playing by themselves, disembodied voices, and the appearance of a strange old woman, Grace isn’t wrong about the house being haunted; she’s just completely mistaken as to who is doing the haunting.

Ghost Type: Oblivious, but with anxiety

Environment Interaction: Yes for her timeline; unclear for present-day

Visibility to Humans: Limited if at all.

Share your favourite films told from a ghost’s POV! Let us know your favourites over on Twitter, in our Official Subreddit, or in the Fiend Club Facebook Group!