Sometimes you look at the headlines, see it’s nothing but doom, and you cry out for a little good news.  So imagine my delight and the delight of horror fans everywhere by Joe Hill’s announcement this week. AMC will screen a 10 episode series next summer, based on Hill’s epic novel NOS4A2. Hill will be the executive producer of the series. Meanwhile, Jami O’Brien of Fear the Walking Dead fame will serve as showrunner.

“I couldn’t be more excited about the forthcoming adaptation of NOS4A2. I know it’s in good hands with showrunner Jami O’Brien: her beautifully composed scripts show a writer at the height of her powers, one who has an exquisite touch with character and a relentless instinct for suspense, [..] AMC’s record speaks for itself: who wouldn’t want to be in business with the ‘Mad Men’ who ‘Broke Bad’ and made ‘The Dead Walk?’ And Tornante’s dedication to bringing singular visions to TV has freed everyone involved to do their best and truest work. I can’t wait to see Vic McQueen turn the throttle and go after Charlie Manx in 2019. Let’s ride.””

For one I am terrifically excited by this news. Hill is a writer with substantial gifts for originality, suspense, and Horror.  Whether it’s in novels (The Fireman, Horns), collections of short stories (20th Century Ghosts), or comic books (Locke & Key).

NOS4A2 tells the story of Vic McQueen, who finds she has a paranormal ability to track the vampiric Charlie Manx. Manx feeds on the souls of children, then hides what is left of them in a place called Christmasland. This is a realm summoned from Manx’s imagination,  where it is Christmas every day and sadness is punished. McQueen must defeat the evil Manx and rescue his victims,all the while being careful not to become yet another casualty to his evil.

Recently, Hill’s comic book series Locke & Key was left high and dry after Hulu passed on the pilot. It must be gratifying, therefore, for him to see one of his best works heading for the small screen. 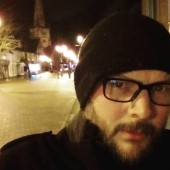 Writer for page and screen, lover of movies, hopeless artist and northern English horrorpunk. Will one day make a film for less than £50.