When Dark Castle Entertainment was originally founded in 1999, its primary objective was to remake the iconic and influential films of William Castle. With his knack for creative marketing and clever plots, Castle’s impact on the realm of horror was huge and the idea was a good one. Reinvigorated by teen terrors like Scream, Final Destination and Halloween H20, the genre was ready for a new spin on Castle’s iconic films. Kicking off the new company’s initiative was House on Haunted Hill in 1999. Quickly following the well-funded release came another, even bigger production; 2001’s Thir13en Ghosts.

Now, if you’re ever looking to divide a room of horror fans, one simple way to do it is to split the room based on opinions of Thir13en Ghosts. On one side, you’ll find die-hard fans who absolutely love the film, its aesthetic, ridiculous naming convention and its time capsule editing style. And on the other you’ll find those who…well, don’t quite care for it. Just to be clear, I stan Thir13en Ghosts. Yes, the house is amazing. Of course the ghosts and their designs are to *ahem* die for. But more than that, I absolutely adore the animated, psychic-for-hire, Dennis Rafkin portrayed by the one and only, Matthew Lillard. More than just comedic relief, Dennis offers the film a rich, and much-needed emotionally complex character that deserves much more attention than he receives.

“More than just comedic relief, [Matthew Lillard] offers the film a rich, and much-needed emotionally complex character that deserves much more attention than he receives.”

In the opening junkyard scene, we are very quickly introduced to Dennis and the role he plays in the film. Hired by wealthy adventurer Cyrus Kriticos (F. Murray Abraham), Dennis is contracted to track and capture 12 ghosts for Cyrus and his undisclosed evil doings. Sensitive to the spirits of the undead, as well as the past and future of the living, the act of channeling and interpreting psychic information is a grueling one for Dennis. The immediate physicality of the process becomes clear as Dennis confirms and locates the presence of Cyrus‘ 12th, and most brutal ghost, Breaker aka The Juggernaut.

Exhibited time and time again throughout the film, there are many subtle layers entwined in this aspect of Dennis‘ character. For one, through Dennis, Matthew Lillard’s acting chops are in peak form and fully on display. Convulsing, twitching, contorting and drooling with each and every exhausting spiritual interaction, Lillard displays his incredible range of physical performance. Countering many familiar on-screen depictions of mediums or psychics, Dennis displays a more painful and more physical process of connection. Unlike the common presentation of a medium as some mature (often female), composed, enlightened and centered adult at peace with their abilities, the act is quite violent in its nature toward Dennis. For some, this physical facet of Dennis is quickly dismissed or interpreted as ‘scenery-chewing’ on Lillard’s part. However, to simply brush it aside as such does the character a disservice. Hidden beneath the drool and bombastic yelling, there is a complicated and important sub-story. Let me explain. In the film, Dennis mentions how he’s had his psychic abilities his whole life. And, while some may call it a ‘gift,’ a lifetime of being different, of seeing the world in a different way has taken it’s toll on Dennis both physically and emotionally. Even though having a foot in both the spiritual and physical world may seem like a cool concept, it keeps Dennis slightly disconnected from both and never really connecting with either. Although Dennis manages to keep this deeper part of him tucked away for most of the film’s runtime, it does escape through a loud exchange with ghost activist Kalina (Embeth Davidtz).

If you hadn’t noticed, I’M A LITTLE BIT OF A FREAK! I come within ten feet of anything dead I go into seizures. I touch somebody, and a whole life full of shit flashes in front of my eyes! Alright? So yeah, I’m depraved. But Cyrus was my friend and he accepted me, so…

And right there, with that last line, Dennis‘ character takes on a whole other level of complexity and importance. Despite Cyrus‘ continual exploitation of Dennis and his ability, there was something about him that allowed Dennis to feel accepted. Perhaps due to their extended relationship while hunting down 12 elusive ghosts, Cyrus allowed Dennis to embrace a side of himself that separated him from the rest of society. Cyrus supported Dennis‘ abilities and encouraged him to use them often and frequently. Even though Dennis knew that Cyrus was up to no good, he rationalized the behavior due to an understandable feeling of self-preservation and the promise of financial gain. While it was unequivocally, undoubtedly a toxic, manipulative relationship, Dennis had his own reasons for staying.

Now, as anyone who has ever experienced a toxic friendship or manipulative relationship can testify to, the scars remain long after the relationship has ended. Although some scars may be visible, others may take the form of guilt, self-hate or regret over poor decisions and bad past behaviors while under the spell of a terrible influence. In regards to Dennis, these emotional scars left on his conscience expose themselves through his explosive behavior and arrogant personality in the first half of the film. Knowingly hiding a terrible secret, Dennis emotionally shields himself through snarky comments, biting sarcasm and moody outbursts. After all, it’s much easier to accept another person’s disdain (or your own) if you pretend like you don’t really care.

As the film continues to develop, stakes and tensions rise as the house becomes activated and more and more ghosts begin to escape their cubes. Coupled with his growing relationship with Arthur (Tony Shalhoub) and his family, there’s a vulnerability and physical insecurity that comes with each and every linking. With the large number of ghosts occupying the basement, the onslaught of connections with displaced spiritual energies breaks Dennis down both physically and mentally. Finally admitting to his connection with Arthur‘s wife, Dennis‘ guilt fueled walk to redemption officially, and truly, begins.

“Dennis is a character that exhibits incredibly relatable traits executed in Matthew Lillard’s own unique way.”

After lifting the ghostly 10-ton emotional elephant off his chest, Dennis begins to react without thinking, acting on sheer impulse and desire. His demeanor shifts and his outbursts (although still common) become less targeted and more induced by simple fear. Even though payment was clearly not happening and he was technically free to leave at any time, Dennis chose to stay and help Arthur find his kids. Fully embracing this new attitude, Dennis makes the ultimate sacrifice when he puts Arthur‘s life before his own facing the Hammer and Juggernaut alone. Even though he saw his death in a previous vision and knew the odds were not in his favor, he made the choice all the same. In a beautifully ironic twist of fate, when Dennis stopped being a victim of his own guilt and self-hate, he became a better version himself…but died a victim all the same.

Luckily for Dennis, he knows better than anyone that death is not the end. Heading into the final frontier as a willing explorer not only redeems him with Arthur and audience alike, it most importantly redeems him with himself. When he reappears in ghostly form to Arthur in the final moments of the film, Dennis is…different. Freed from guilt and the painful side effects that spiritual channeling caused his corporeal form, there is a peace in both his physical stance and his demeanor. His voice is calm, his facial muscles and mannerisms are relaxed. Long gone are the tense movements and uncontrollable drooling sessions. With both feet firmly and finally planted in one world, Dennis can fully embrace his true and unique self. No longer straddling the realm between life and death, Dennis is allowed to finally just, be.

With its abundance of ghosts, stunning set pieces, intense film score and early 2000s editing style, it is easy to understand why the complexity of Dennis‘ character often gets overlooked. Like one of those magic eye pictures also popular in the late 90s, it is often hard to know where to focus one’s attention. In the end, this trait leaves Thir13en Ghosts with an overall feeling of excess and confusion. However, if given the chance, Dennis is a character that exhibits incredibly relatable traits executed in Matthew Lillard’s own unique way. Although haunted by his own personal ghosts, he ultimately refuses to be defined by them. And when truly put to the test, Dennis makes the conscious decision to accept and acknowledge his mistakes and guilt. In taking this subtle, but crucially important step, a new version of Dennis emerges. And lucky for us, it doesn’t require any special spectral glasses to see it. 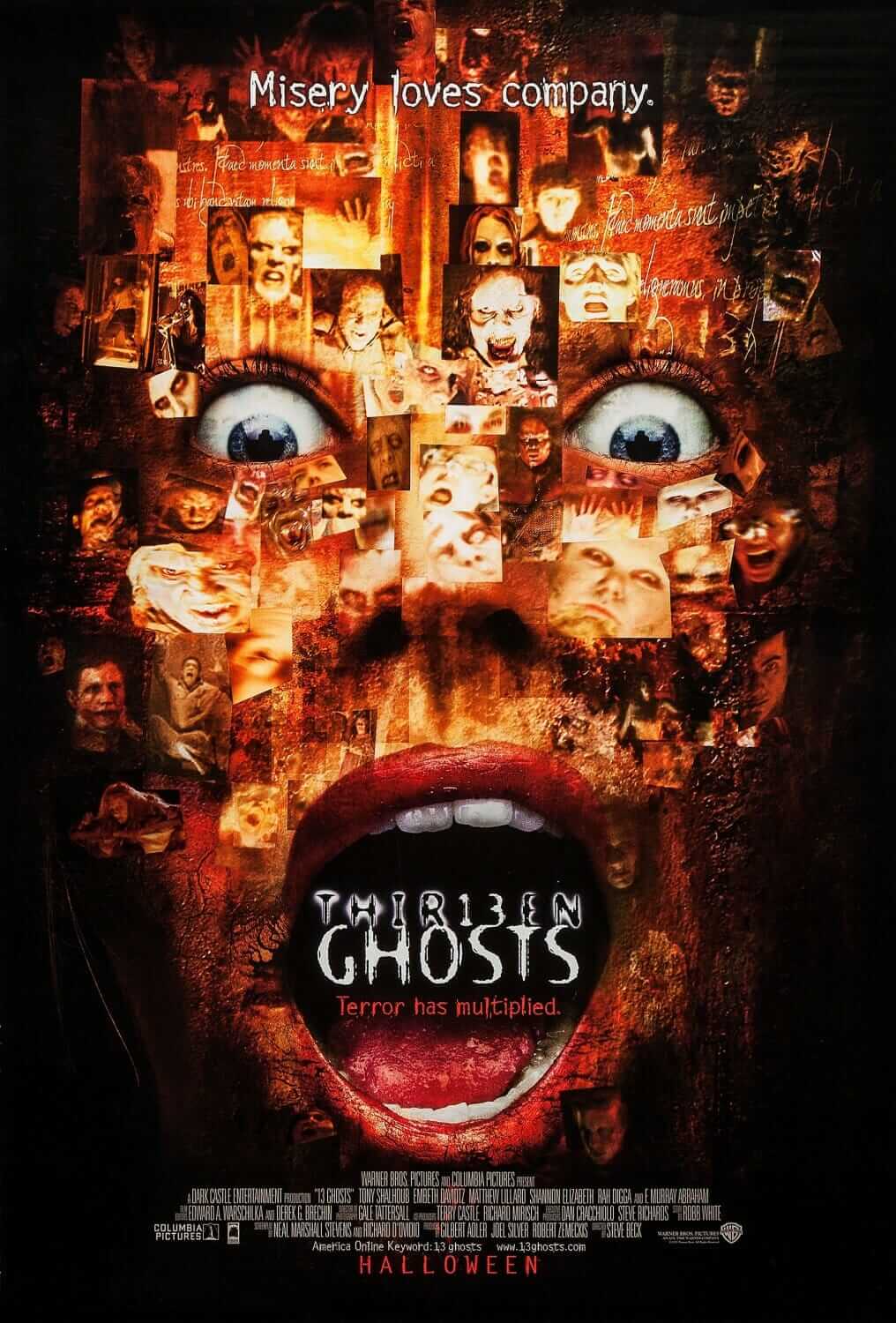