Following in the wake of teen titans like Scream, I Know What You Did Last Summer and The Faculty came the 1999 stoner horror-comedy Idle Hands. With a unique style and strong teen cast, Idle Hands served up quirky, gore soaked comedy on a shiny silver rolling tray. However, audiences and critics alike were less than receptive. Perhaps the film was victim of an aging audience, teen angst burn-out, or the tragic shooting at Columbine that happened a mere 10 days before its release date. Whatever the reason for the film’s complete box office failure, the fact remains that Idle Hands deserves better. While the film’s strong effects, time capsule soundtrack and irreverent attitude are enough to support it, its true strength resides in Devon Sawa’s character, Anton Tobias.

Ok. I know that last statement will immediately get some push back, but hear me out on this. Directed by Rodman Flender, Idle Hands is the story of a lazy teenage boy who’s hand gets possessed by a body hopping evil spirit. Yes, when we first meet Anton he is a completely apathetic, totally spoiled, open stoner loser. He has no ambition, no drive and no defined goals for where his life is heading. While not exactly likable, Anton is a prime example of late 90s, middle-class teen angst and how society viewed the young Gen X demographic. Even now (maybe even especially now), Anton‘s stagnant beginning speaks to the stale mental periods we all go through from time to time.

“Anton is a prime example of late 90s, middle-class teen angst and how society viewed the young Gen X demographic.”

In the opening scenes of the film, Flender does a fabulous job at portraying the kitschy, suburban scenario that Anton exists in. Fred Willard and Connie Ray summon wholesome, adorable images as Anton‘s loving parents. They poke fun at Anton‘s laziness and immediately dismiss him as the creepy perpetrator who has vandalized their bedroom ceiling. Even with their limited screen time, Anton‘s family dynamic and general upbringing is quickly and efficiently established.

We finally meet Anton as he wakes up in his attic bedroom. Inexplicably and seamlessly transitioning from his stereo to his Walkman, Anton stumbles out of bed and heads downstairs. Completely oblivious to the events that have transpired in his own house, Anton misses multiple clues that hint at his parent’s misfortune. When he discovers they are out of milk, he yells the news to his mom. Out of dog food? He yells again. While these character choices may seem a bit extreme, the sentiment is accurate. By residing in the attic, Anton is literally, physically distancing himself from his family as much as possible. By inundating himself with music and television, Anton is disconnecting himself from the outside world and tuning in to distraction. Anton is so bored with his life that he can barely be bothered to participate in it.

Also known as the MTV Generation, Gen X’ers were often thought of as lazy, cynical and unmotivated. The U.S. economy was strong in the 90s, technology was growing and in general, things were good. For a lot of American families, the 90s were a time of stability, opportunity and potential financial growth. This overall societal trend created a rather stable economy, but it also created a rather uneventful one. There was a resurgence of suburban centric values in ways not quite seen since the 1950s. For many young adults, this did not sit well. Even though many struggled with what they did want, many knew they didn’t want that. So even though he looks a bit pathetic to modern eyes, Anton embodies this generalization beautifully. Despite his strong sense of general apathy, Anton adds another level of distance with his use of marijuana. After finding his friends are dry, Anton‘s cravings hit new highs causing him to use poor judgement in his attempt to score. When stopped by a couple old classmates turned cops, Anton questions if they’re holding. Not only does this show Anton‘s complete lack of respect for authority, it shows he’s incapable of acknowledging that these classmates have moved on with their lives.  Even though open use of weed is not really a big deal now, in the 90s, it kind of was. Following up Nancy Reagan’s ‘War on Drugs’ and ‘Just Say No’ initiatives, being an open stoner was a rather bold choice for anyone to take. Not only does Anton‘s supreme dedication to the herb play into his character, it also plays with 90s society’s stereotypical view of stoners.

As Anton finally starts to piece together what happened to his parents in Scooby-Doo like fashion, we begin to see him come out of his apathetic fog. Pulled back towards reality with the death of his parents, Anton calls over his friends Mick (Seth Green) and Pnub (Elden Henson). After breaking free from the spell of 2 Live Crew, the three comically come to the realization that Anton is in fact the killer and housing an evil spirit in his right hand. Ultimately, it takes Mick and Pnub becoming victims themselves for Anton to finally get called into action.

Now, it’s important to note that when Anton does finally choose action over inaction, he’s still very Anton-ish. His choices are questionable, his actions clumsy and his thought process is still very much in line with the character we’ve been following. He buries his friends in the backyard, only to watch them reanimate. When Anton attempts to retrieve his cat Bones from Molly‘s (Jessica Alba) yard, he gets distracted by her advances. Even though he is potentially putting her in danger by indulging her extreme and poorly written flirtations, he can’t help but seize this opportunity that he’s been dreaming of. While this is clearly the wrong choice, it somehow still makes sense. When his dead friends suggest possession, he enlists the help of local metal head Randy (Jack Noseworthy) to help. Because all metal heads are experts in satanic things right? And finally, when he can’t control it any longer, Anton cuts off his hand with a meat cleaver. Although each and every choice that Anton makes is completely ridiculous, it is also extremely true to his character and how it has been established.

After Anton has literally severed his physical relationship with his possessed hand we see the next stage in his character’s development. In theory, Anton‘s story could end right here. And if he was truly as apathetic as he was pretending to be, it would have. However, at this point Anton has something to more to lose than just his appendage; Molly. When he realizes the hand is after her, Anton heads to the school’s dance with his zombified friends in tow. And dead sober at that. For the first time we see Anton really stepping out of his comfort zone and attempt to make a change. When he gets to the school dance, he tries to not only find Molly, but warn the entire school about the danger lurking in the gym. Due to his reputation, nobody, not even The Offspring, believe a word of what Anton is yelling about from the stage. That is, until the hand reveals its…well, hand. 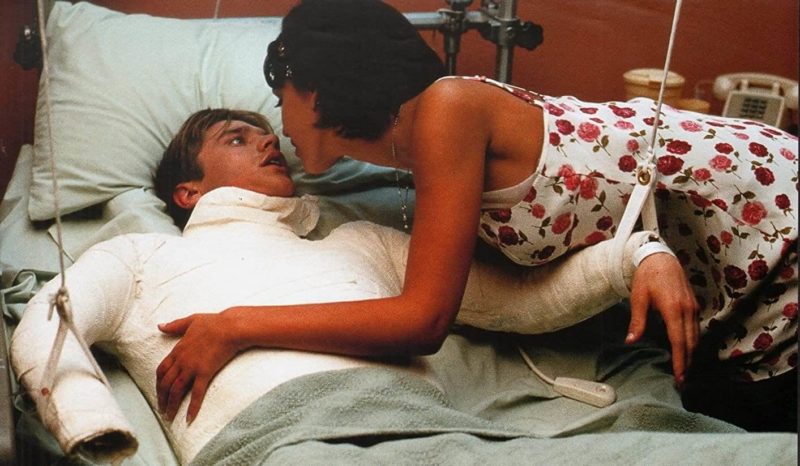 With the assistance of priestess Debi LeCure (Vivica A. Fox), Anton and friends chase the hand all over the school. Ultimately, the chase ends with Anton and friends cornering the hand in the auto shop during its big final attempt to murder Molly. Tapping into his inner strengths and cultivated talents, Anton rips the ultimate bong hit and sedates the hand via puppet hotbox. This momentary stall tactic allows Debi to arrive on the scene and destroy the hand with her specialized blade. By utilizing the tools at his disposal and engaging his expanded lung capacity, Anton simultaneously infused his previous persona with his new, evolved one. Personal growth is always a good idea, but it’s important not to totally abandon oneself in the process.

Further emphasizing Anton‘s new approach and outlook on his life, when crushed by the car lift thanks to his undead friends, Anton is forced with the ultimate choice. Similar to Mick and Pnub before him, Anton is offered the choice of heavenly salvation, or life and painful rehabilitation. Earlier Anton was so bored and checked out from his life he required a constant stream of distraction and weed to cope. However, this final version of Anton is not quite the same character we were introduced to in the beginning. Rather than taking the easy way out and checking out for real, Anton chooses life, a future and yeah, that Molly girl. Ironically, it took losing a literal piece of himself for Anton to find more of himself.

Idle Hands is one of those films that people seem to love or hate. Some find sheer joy in its bonkers plot, special effects, Sawa’s incredible physical acting and perfect 90s production design. Others struggle with its logic and hyperbolic personas. And while some characters are indeed poorly written (don’t get me started on Molly), Anton transcends such arguments. Over the course of one blood drenched day, we watch Anton‘s character arc develop in limited, but realistic ways. Not just an onscreen lazy fuck up, Anton embodies the larger societal view on young adults in the 90s.

While writing Anton with such little development may initially seem unsatisfying, it is very clever. In the end, Anton is different and he has changed. Even though that change may be rather small, it proves that Anton (and young 90s adults in general) are capable of more. More often than not, apathy, angst and passivity are simply phases. Phases that many of us cycle through from time to time. But just like Pnub‘s weed smoke floating around a smelly basement, these phases too shall dissipate and pass. Through Anton, Idle Hands holds a humorous black mirror up to audiences simultaneously challenging and playing with societal views on Gen X young adults. It’s a perfect time capsule gem, wrapped in societal satire, tied up with a horror-comedy bow and housed in Anton‘s personal stash box. Put that in your pipe and smoke it.

What are your thoughts on Idle Hands? Were you one of the few who caught in the theater? You can share your respectful opinion on the film with us on our Twitter, reddit, Instagram, or on The Horror Movie Fiend Club on Facebook!