Usually, I’m not a lover of gore in horror movies. I don’t have the stomach for it most of the time, and I’m still traumatized by the year I went to see both Hostel (2006) and Saw III (2006) at the cinema. However, I love moments of well-placed gore – specific injury sequences that make you wince, and you can’t stop replaying. It’s for this reason that I love a bit of hand-related horror.

Hands are a vital appendage in horror. They can help characters escape or can be used to defend against the killer or monster. However, this leaves them extremely vulnerable to injury. And while that’s bad news for the hands involved, it’s great news for me picking my favorite horror hand injuries. Trick is a serial killer who likes to kill on Halloween night, and after the initial incident in 2015, Detective Mike Denver tracks any Halloween night massacre to try and keep tabs of Trick.

In 2018, Denver is at a bar with Agent Swift and Agent Mendez, trying to convince them the Trick is likely to attack again. He’s right because Swift finds himself strung up in a trap with a wire around his neck, which is attached to a hanging pile of cinderblocks. Denver and Mendez try their best to save Swift, but when Trick jumps on the cinderblocks, Swift finds himself missing his head. Unfortunately for Mendez, her fingers are in the way when the trap goes off, and she loses a good number of them while she watches her partner die.

In Child’s Play 2, Andy has been placed in foster care, and while he finds a friend in his fellow foster child Kyle, he also finds Chucky has returned for him.

The final showdown occurs in the Play Pals toy factory, with Andy and Kyle trying to get rid of Chucky once and for all. As Andy climbs up a piece of machinery, with Chucky in hot pursuit, Kyle slams a metal door down on Chucky, jamming his hand in place. Sure Chucky is a doll, but at this point, he’s turning more and more human, meaning the effect of Chucky pulling his hand off to free himself is gnarly. His doll skin stretches to reveal blood, gore, and tendons, making it incredibly stomach-churning.

The Gecko brothers don’t have the best of luck in From Dusk till Dawn, but Ritchie gets the worst of it throughout the movie. In the opening standoff, Ritchie ends up getting shot through the palm of his hand. While he doesn’t seem too fazed, we get the amazing shot of Ritchie looking at his brother, Seth, through his hand hole before he wraps the wound in duct tape.

When they arrive at the Titty Twister bar, the brothers find themselves in trouble again, and Ritchie ends up getting stabbed right through the hole in his hand. Not only must it be incredibly painful to get stabbed through a bullet wound, but the copious amount of blood that pours from Ritchie’s hand causes Santanico Pandemonium to reveal her vampire form, and promptly start feeding on Ritchie. 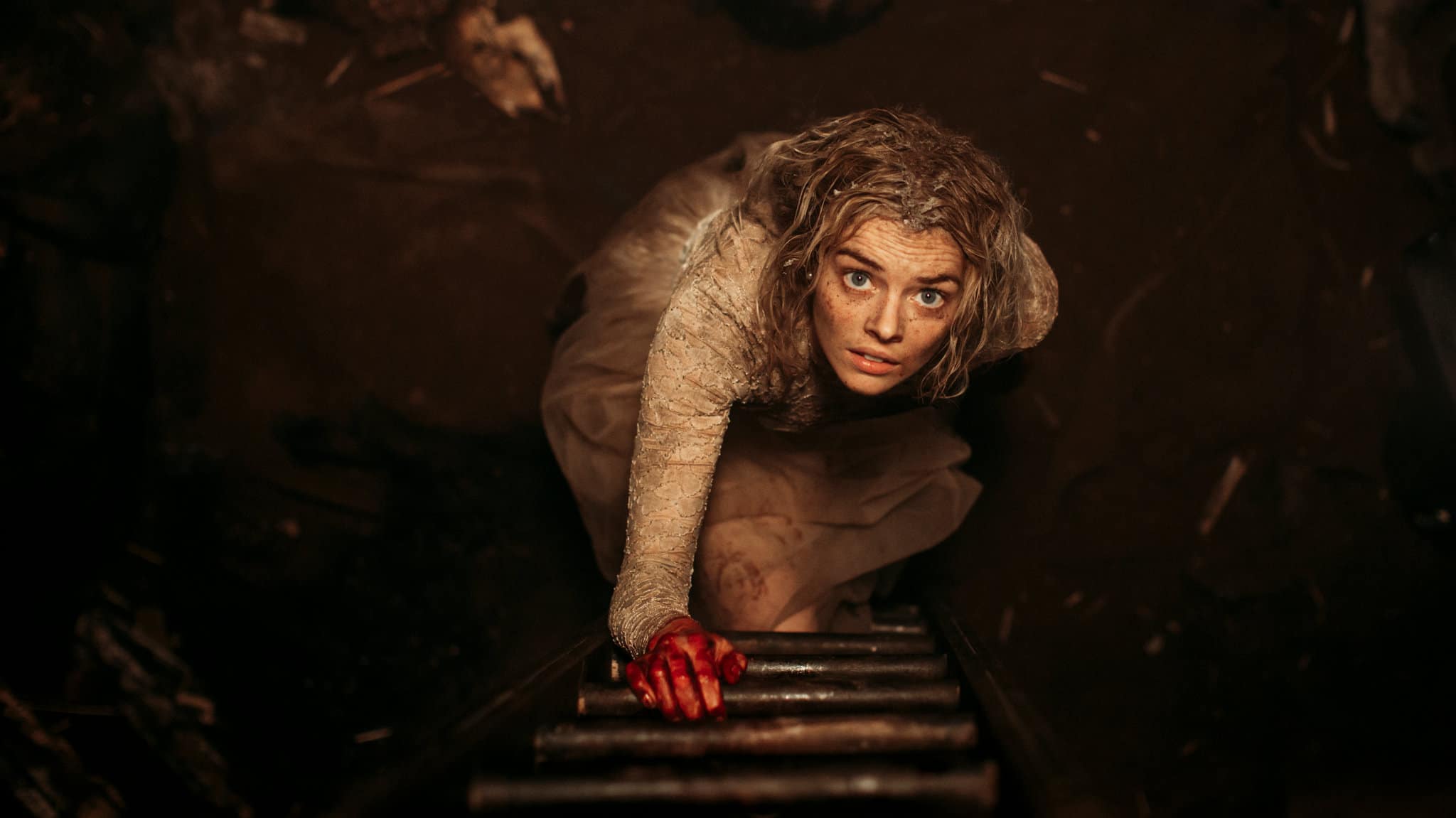 As far as final girls go, Grace from Ready or Not goes through a lot. While hiding in the stables, Grace gets shot through her hand by her new nephew Georgie. She then falls into a pit and has to put herself free after the ladder breaks.

The audience can see the nail sticking out the top of the hatch, and we know what’s coming before it happens, but that doesn’t dampen the shock when Grace slams her bullet wound right onto the nail. She then has to pull herself up with her injured hand rather than risk falling again. It’s a tough watch. Rose the Hat is the child-killing villain in Doctor Sleep who feeds on the steam of children with special powers similar to Danny Torrance. Rose can astral project and uses this skill to track down the children her gang needs to survive.

However, their latest intended victim, Abra, is a lot more powerful than even Rose has given her credit for. When Rose makes her way into Abra’s head, Abra has laid a trap for her. As Rose dips her hands into the filing cabinets, representing Abra’s mind, the drawer slams shut. To get Abra out of her head and flee, Rose has to force her hand out of the drawer, ripping the skin off the bottom section in the process.

The Burning tells the story of Cropsy, a camp caretaker turned murderer after a prank gone wrong left him horribly burned and, understandably, quite angry. Five years later, Cropsy is back and heads to Camp Stonewater to kill some campers to work through his issues.

The raft scene is probably the most famous in The Burning, and rightly so because it’s bloody fantastic. As a group of campers approaches a runaway canoe on their makeshift raft, they are incredibly relieved and excited. However, that excitement is cut short when Cropsy pops up from the canoe and murders everyone on the raft. The whole scene is gory and brutal, but Woodstock suffers a particularly nasty hand injury when he gets most of his fingers chopped off with Cropsy’s shears. The Saw series is not short on hand injuries, so I felt a few of them had to make it onto this list. In Saw II (2005), Addison gets her hands stuck in a trap while retrieving the enclosed antidote. While she gets her hands in no problem, the box’s holes are lined with blades, meaning she’s unable to remove her hands without ripping her wrists to shreds. In Saw VI (2009), William can save two out of the six colleagues who end up part of his carousel game if he chooses to pierce his hand instead. While he could have let them all die, William willingly injures himself twice to prevent as much death as possible.

Perhaps the most brutal of final traps appears in Saw V (2008) and sees our last two survivors having to donate ten pints of blood to escape. If they had worked together from the start, it would be a minimal sacrifice, but as they were selfish, it’s down to the two remaining survivors to almost bleed themselves dry to escape. With no choice, they both stick their hands into circular saw blades, splitting their hands and lower arms in half. Before Doctor Sleep, director Mike Flanagan gave us Gerald’s Game, proving that he knows how to pull off a genuinely disgusting hand injury. When Jessie finds herself handcuffed to a bed and stranded when her husband dies of a heart attack, it’s clear she’s going to have to do something drastic to free herself.

Jessie wedges a chunk of glass in the shelf above the bed then cuts and degloves her hand so her skinless and now slippery with blood hand can slip free. It’s an incredibly hard and disgusting watch, with Flanagan never shying away from showing the entire thing in excruciating detail. In Dark Castle’s 2005 remake of House of Wax, Carly and her boyfriend Wade travel to the remote town of Ambrose to try and find a replacement fan belt for Wade’s car when things take a dark turn. Carly finds herself locked in the basement of Bo’s gas station when her brother, Nick, turns up looking for her. With only one hand free, Carly tries wiggling a finger through a grate to get Nick’s attention. Unfortunately, Bo sees her, and while he distracts Nick and pretends to tie his shoelace, Bo snips the top off Carly’s finger with a pair of pliers. Evil Dead earns itself the top spot for having not one but two incredible hand injuries. First up, we have Eric, who takes it upon himself to read from the Naturom Demonto despite the many warnings against such activity, and then spends the rest of the film suffering for it. When a possessed Natalie swings at Eric with a crowbar, he tries to shield himself with his arm. However, this means his hand takes the full blow, sending his broken fingers splaying in several different directions.

And then we have Mia, who has already been possessed, died, and brought back to life when the apocalypse kicks in, and she finds herself fighting for her life against the Abomination. After trying to escape under a car, Mia ends up with one hand pinned as the Abomination makes its way round to kill her. Refusing to be beaten after all she’s gone through, Mia rips her hand off to survive. We see every single detail, from the skin stretching to the meaty gristle within being pulled apart. It’s absolutely disgusting but cements just how unstoppable a final girl Mia is.

Do hand injuries make you squeamish? Was this list post nothing more than nightmare fuel for you? Let us know many times you shuddered while reading through this over on Twitter, in the Nightmare on Film Street Subreddit, and on Facebook in the Horror Movie Fiend Club?