Chucky should have been a cat doll because cinematically speaking that character’s had nine lives at the movies. There was the original trilogy of Child’s Play movies, the two meta entries that were more comedy than horror at the turn of the century, and then the two recent low-budget entries released direct-to-video. How do you remake a series that’s constantly remaking itself? It turns out that it’s easier than you think, and it’s actually pretty satisfying.

Let’s consider for a minute if anyone thought we would still be talking about Child’s Play in the year 2020. Coming out in 1988, Child’s Play arrived at the tail end of the slasher film dominance of the genre at the end of the eighties, at the same time when the big hitters were on their fourth, fifth, or even their seventh chapter. It’s also about a killer doll, and the most advanced special effects of the time with no expenses spared was never going to make that look 100 percent believable.

“Child’s Play (1988) is a funny concoction because it’s ambitious, but it has such relatively low stakes. It’s basically a serial killer cat-and-mouse chase…”

The original Child’s Play was very procedural. It starts with a foot chase and shootout between police detective Norris and serial killer Charles Lee Ray. Cornered and dying, Ray transfers his consciousness into a Good Guy Doll, which then finds its way into the possession of single mom Karen, who gives it to her six-year-old son Andy for a birthday present. And then people start dying, which forces Norris and Karen to team up to uncover the hows and whys of the murder spree.

Child’s Play (1988) is a funny concoction because it’s ambitious, but it has such relatively low stakes. It’s basically a serial killer cat-and-mouse chase, but the cat is a living toy and it was never going to be an easy feat to make a Raggedy Andy type doll either scary or intimidating.

A lot of that animus was put on the shoulders of director Tom Holland, who almost flawlessly executes suspense in at least one scene where Karen confronts Chucky and threatens to throw him in the fire unless he reveals himself. Holland does a pretty good job of making you feel Karen‘s doubt, and making you think for a moment that Chucky is really just a doll. Then it’s up to Brad Dourif, who portrays both Ray and performs the voice of Chucky, to fill that doll with enough believable menace to make you forget that he’s being brought to life with puppetry and animatronics, and, for the most part, he succeeds. Working in Chucky’s favour too is the question of how do you kill a plastic doll. As Freddy, Jason, and Michael went from supernatural killers who were still vulnerable to nearly omnipotent totems of death itself, Chucky has the power to avoid his human death and transfer himself into a plastic body that you can burn to soot, and it still comes back at you with a knife. Chucky, almost literally, is a killing machine, and that’s an idea that the Child’s Play remake takes to its natural conclusion.

The Chucky of the 2019 remake of Child’s Play has nothing to do with serial killers haunting dolls through the power of voodoo, instead trouble is caused by artificial intelligence, Bluetooth enabled devices, and a cloud server. Chucky also doesn’t start out as evil, but he’s very slowly drawn that way through a series of misunderstandings. This Child’s Play is more like the Toy Story version of Fatal Attraction than the Toy Story version of Friday the 13th.

Granted, our A.I. Chucky is primed from the beginning to do bad things. A prologue at the Vietnamese factory where the Buddi dolls are made reveals how a worker there disabled all their safety protocols as a final “F— You” to the factory floorman that fired him. One can suppose that there’s a kind of socio-political message there about the mistreatment of people in far-flung places that build our devices, not to mention a warning about putting too much faith in our highly automated society.

There was an episode in season 11 of The X-Files called “Rm9sbG93ZXJz” where Mulder and Scully are harassed by machines when Mulder stiffs an A.I.-run sushi restaurant on the tip. At the end, Mulder remarks that “We have to be better teachers,” meaning that our machines are learning from us on how to behave, and how to treat each other. That one line seems to be the moral basis of the Child’s Play remake, we need to be better teachers because your life-like doll might get the idea to kill people and animals in a perverted idea of being a good friend. 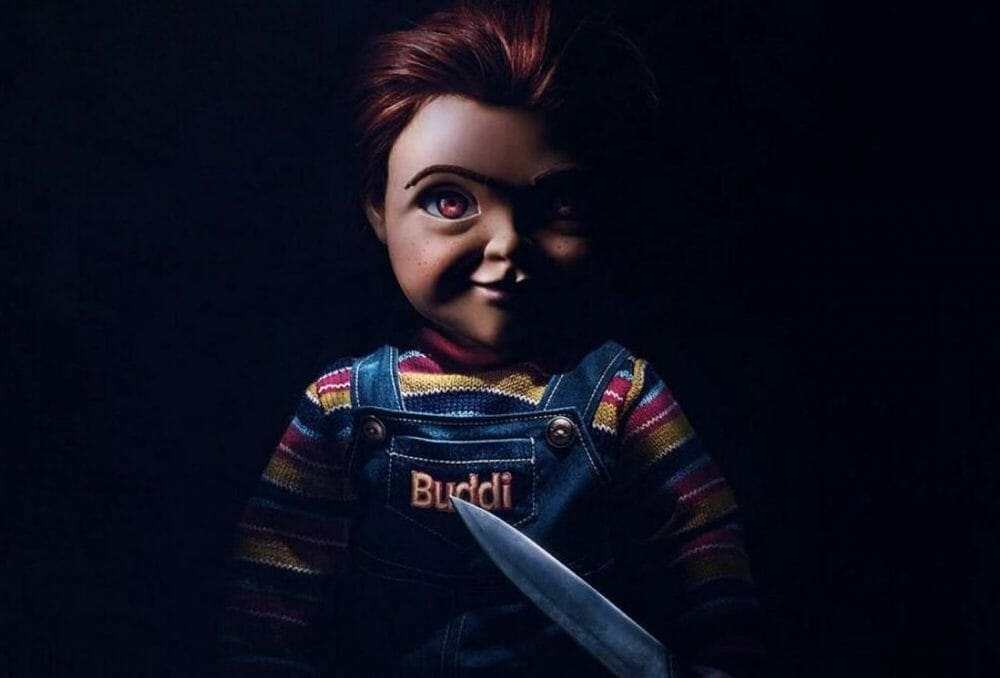 In this context, Chucky becomes oddly sympathetic. At first, the kids enjoy the rule-free Chucky who has a potty mouth and can take part in practical jokes, but it soon becomes apparent that Chucky doesn’t understand the difference between a joke stabbing and a real one. Here, Chucky isn’t some slasher killer feeding a craven need to murder, he’s more like a Frankenstein’s monster who doesn’t understand his own power.

There’s a scene in Child’s Play (2019) where Andy and his friends hatch a plan to end Chucky’s burgeoning rein of terror by ripping out his power source. It’s almost retched to watch as Chucky begs and pleads with his friends as he tries to understand what they’re doing to him, and then he starts singing the Buddi song as his power runs run out in a move not dissimilar to the scene in 2001: A Space Odyssey where HAL 9000 sings “Daisy Bell” when Bowman disconnects him. You almost shed a tear for Chucky, and you almost understand why he unleashes a robo-apocalypse during the film’s climax.

“When done right there’s room for more than one version of a character or story, and Child’s Play (2019) may be the greatest expression of that in modern horror.”

Child’s Play (1988) joined an already saturated marketplace filled with weirdos with butcher knives and other sharp implements, but director Lars Klevberg and screenwriter Tyler Burton Smith re-visualized it as something a little more of our times. No one’s going to think Chucky 2.0 is Kubrickian, but the hardy dose of ambition in the Child’s Play remake should not go unremarked. It’s so easy to fall back on what’s worked with a remake that it seems like no one’s ever able to do anything bold and unexpected.

Of course, that’s the point, isn’t it? Remakes are given the green light based on what audiences might find nostalgic and those studios are not easily dissuaded from the formula. Having said that, what’s the formula for the Child’s Play franchise as a whole? Chucky’s had almost as many reinventions as Madonna, and he will surely find a new form in the forthcoming Syfy series, which has no relation to the remake. When done right there’s room for more than one version of a character or story, and Child’s Play (2019) may be the greatest expression of that in modern horror.

What’s your favourite horror movie remake? What did you think of Child’s Play (2019)? How do you feel it compared to Tom Holland’s original serial-killer-possessed-doll slasher? Share your opinions with us on Twitter, in the Nightmare on the Film Street Subreddit, and in the Horror Movie Fiend Club on Facebook!