If you haven’t caught Netflix’s newest film Bird Box, directed by Susanne Bier, then you’re missing out. Adapted from Josh Malerman’s novel of the same name, Bird Box was released on December 21, and although your queue is already filled with tv shows and movies you haven’t found time for, this is a film that you will not want to miss. Bird Box stars Sandra Bullock (Speed, Miss Congeniality) as a first time mother-to-be trying to survive a bleak and treacherous world.

Netflix’s marketing for the film painted it as a terrifying journey into the unknown. With trailers and materials showing a blindfolded Bullock, it seemed to be setting itself up as a sensory deprivation horror flick like 2018’s A Quiet Place. However Bird Box is less of a horror film than it is an uncomfortable journey through motherhood. Although the graphic depictions of suicide will stay with you long after the movie ends, the horror takes a backseat to the heavy handed motif of being a mom.

The film opens on Malorie (Bullock) and her sister Jessica (Sarah Paulson, American Horror Story) leaving a doctor’s appointment. Malorie is pregnant with her ex’s child, and it quickly becomes evident that she’s concerned she’ll be as terrible a mother as her own growing up. As they head home the city breaks out into chaos, where people—including Jessica—are inexplicably compelled to commit suicide upon seeing an otherwise invisible presence. Malorie finds herself trapped in suburbia with a group of strangers who need to scavenge, stay blindfolded, and fight off deranged people in order to survive. Along the way Malorie gives birth to  her child, rescues a second, and is forced to make a harrowing—blind— journey down river by boat in order to escape certain death.

Malorie and her sister begin the film talking about how she’s worried she won’t be able to bond with her baby, since she’s never been one to connect with people, and her character is often reminding the audience that her parents were cold and disconnected while growing up. A tender moment with Tom (Trevante Rhodes, Moonlight) has him sharing an anecdote about a father walking his children to school, and later their conversations revolve around Malorie’s need to be a better mother. Olympia (Danielle Macdonald, Dumplin’) is a kind and loving mother-to-be too, and she has a notable aside where she tells Malorie that her parents spoiled her with love and foreshadows her own death by asking Malorie to care for her child should anything happen to her. Even the bulk of the action centres around the children. Both Olympia and Malorie go into labour at the same time, which is coincidentally when a stranger resolves to kill off the survivors in the house. The film’s dramatic conclusion is Malorie trying to bring her two children to safety on her own; a feat she is only able to accomplish once she accepts her role as their mother and expresses her unconditional love for the children.

This isn’t to say that Bird Box isn’t a good movie. Bullock gives an incredible performance as Malorie, coming across as relatable despite the unbelievable circumstances. Rhodes’ Tom acts as the perfect foil to Malorie, and John Malkovich (RED, Warm Bodies) gives an amazing performance as the unlikeable homeowner Douglas. The pacing is great as the film cuts between Malorie and her children on the river with her time spent pregnant in the house, and there’s not a moment that goes by where you can’t cut the tension with a knife. If you’re looking for a movie that will keep you awake long after it’s done then this sadly isn’t it, but if you’re looking for something that keeps you on the edge of your seat and is loaded with stellar performances and brilliant directing, then make sure to check out Netflix’s Bird Box this winter break.

What did you think of Susanne Bier’s Bird Box? Do you want to see Sandra Bullock in more horror movies? Let us know on Twitter, Reddit, and in the Horror Movie Fiend Club on Facebook!

TLDR Bird Box is an amazing movie and worth a watch, but if you're looking for something scary then this isn't it.

Use of A-List Actors

Heavy-Handed Use Of Motherhood Motif

Genuinely Thoughtful Story Thanks To The Book's Author 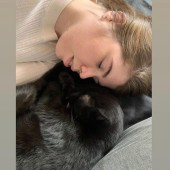 Horror author, columnist, lecturer, and CEO of Sanitarium. If she’s not covered in ink or wading through stacks of paper, you can find her ranting about issues in pop culture. For more visit caitlinmarceau.ca