Revisiting CUBE on its 20th Anniversary

I saw this movie in 1998 on VHS. I was seventeen and deeply misunderstood. A friend told me he had just seen a movie where, and I quote, ‘these people get kidnapped and left in this square thing, and one of them gets their face melted off with acid‘. Now you have to remember this was a pre-Saw world where kidnap and mutilation wasn’t hip like it is now. My friend went on to say ‘that’s not even the best bit‘ and that I simply ‘had to watch it because it was totally f**king rad’ (please excuse his language).

Having never heard of the film, I went to my holy place of worship for some guidance; the local video store. I found Jim (my video guru) sitting dutifully behind the counter and he knew exactly what movie I was after. I rented it, watched it, and freaking loved it.

Now, it has been quite some time since I have seen Cube, so I was a little fearful re-watching it. I was worried all of that time and nostalgia may have put a warm, loving glaze on my memory. But, after 10 minutes I was happily rapt in Vincenzo Natali’s strange, square world. I stayed there until the credits rolled 80 minutes later.

These lovable strangers wake up in a wacky maze of square rooms filled with high-tech traps. Including; acid spray, razor wires and flame throwers. Having no memory of how they got there or what to do next, they quickly figure out that wandering aimlessly can be bad for their health. It also seems the strangers’ backstories and skills may be relevant to their current predicament (except for Alderson). If our protagonists want to survive, they must combine their abilities and work together to solve the puzzle of the cube.

Cleverly all the characters share their names with prisons: Quentin (San Quentin), Holloway (England), Kazan (Russia), Rennes (France), Alderson (West Virginia), Leaven and Worth (Leavenworth). I wonder, did the masterminds behind the cube only look for people with jail names? Surely that would have held up the search?

As mentioned, the entire film was shot in one, single cube but to simulate the different coloured rooms, they had to change out the gel-filled wall panels. The process was difficult and time consuming so they consequently decided to shoot the film colour by colour instead of chronologically.

Cube is directed by Vincenzo Natali and co-written by Natali, André Bijelic and Graeme Manson. The film was shot in Toronto over just 20 days, on a single 14′ x 14′ set for a budget of $365,000 Canadian dollars. Cube grossed over $560,000 at the box-office in a limited release and has received mixed to positive reviews, with a current rating of 62% on Rotten Tomatoes. The movie won Best Canadian First Feature Film at the 1997 Toronto International Film Festival and a Silver Raven Brussels International Festival of Fantasy Film in 1999.

With its enigmatic and simple premise, this works best as a series of nerve-stretching suspense sequences as the characters try to get past the killing traps. – Kim Newman, Empire Magazine.

Cube now enjoys a strong cult following, spawning a sequel and prequel, not to mention a rumoured remake is apparently in the works by Lionsgate films.

What I love about Cube

Cube’s strength comes from its characters and their shifting group dynamics. As our “A-Team” come together, they quickly settle into their real life roles. Quentin, the police officer, assumes command,. Helen, the doctor, cares for people. And the Mathematician Joan, well.. she does the maths. But as the stress levels increase the relationships deteriorate- first into petty squabbling, then into something much more sinister, the situation soon grows tense. And in Quentin’s case, absolutely terrific.

The majority of the film has the characters traveling from hatch to hatch (each room has 6) trying to decide if the room on the other side is safe. This may sound repetitive, but it’s enthralling! Every time a hatch gets opened, we fill with dread. Whenever one of our new friends drops down into the next room, we hold our breath with them, waiting to see if a trap will spring.

Another thing that draws me to this film are it’s RPG-inspired elements. Each character has a ‘Class‘ and a ‘Special skill‘. The special skill of each captive is established early on, all except for two; Alderson and Kazan. Kazan’s reveal is perfect in it’s simplicity. It happens when the stakes are high, as our entrapped amigos hit another bleak dead-end. When all hope seems lost and there are no other avenues to explore, Kazan’s talent pops out and says a quiet little hello! (deus ex machina anybody) And, instead of finding it too convenient – it seems natural, well earned and uplifting, a proverbial light in the dark.

We quickly forgive the occasional piece of mediocre acting as the character arcs are tense, brutal and believable. The use of hand-held cameras convey a claustrophobic  feel to every scene. This coupled with a haunting score is used to stress the despair and urgency that is present throughout the film.

Ultimately Cube will leave you with a lot of questions. Who built it? Why did they build it? Why cubes and not pyramids? We never get answers, but it doesn’t really frustrate us. We know enough to stay invested but never enough to ruin the mystery. I do however want the answer to one question: ‘Who is Alderson is and what is his god damned specialty?‘ I really hope it was Parkour.. Or maybe baking.

Does it hold up?

In a word, YES! First of all, Cube is awesome, the story is mysterious and engrossing, furthermore the effects look realistic and satisfying icky.

The 20th anniversary special edition is available now on bluray. Alternatively, it is also available on Shudder. 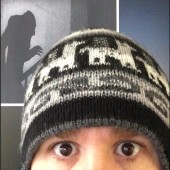 Simon is a nice guy! He is 1/2 of the parenting podcast The Dad Zone. He loves movies, especially horror, video games, especially not horror, and is addicted to cool T-Shirts. He often talks in the 3rd person, or is it 2nd person? Simon is not sure. Simon also likes most sports, but don't hold that against him, or is it me... or us?