[Screams Heard Around The World] A DARK SONG is A Slow, Exhausting Horror Contained in A Big Empty House 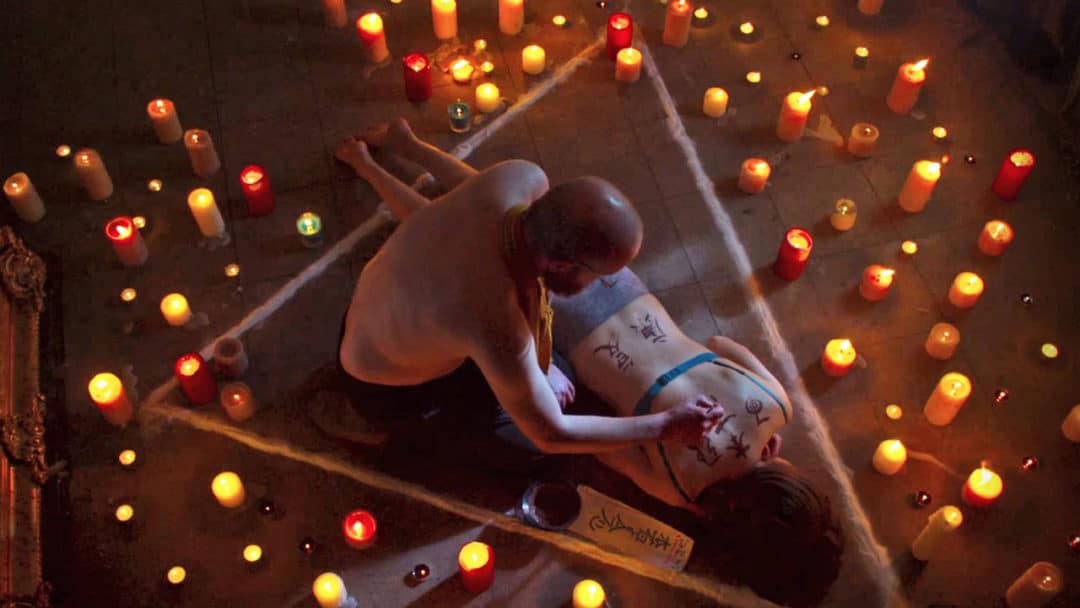 Big old houses are scary. They creak, moan, and rustle with the sounds of weary joints and drafty windows. Their many rooms could contain anything, from empty furniture to malicious spirits. Big old houses are objects of fear and intrigue, a place both dreaded and desired. This intersection of dread and desire is the key to Liam Gavin’s 2017 feature film debut, A Dark Song. The house at the center of A Dark Song is not haunted or filled with demonic beings. Rather, it is an empty vessel to be filled with rituals, chants, and desperation.

Sophia (Catherine Walker, Leap Year) is grieving. Her son has been murdered and nothing in the world can console her. Her grief pushes her to contact Joseph Solomon (Steve Oram, In Fabric), an occultist who can lead her through the grueling ritual of summoning her guardian angel. She pays a huge sum of money to purchase an abandoned country estate and plenty of supplies to ensure the ritual’s completion. But there are a few stipulations to the ritual’s success; they cannot leave the house under any circumstances, each must follow the instructions to a tee, and they must be completely honest with one another. Obviously, they both break those rules and slowly start to lose patience with the other as they are forced to live together under stressful and exhausting conditions. Tensions build, resentment grows, and the world of angels and demons begins to bubble up around them.

“The house at the center of A Dark Song is not haunted or filled with demonic beings. Rather, it is an empty vessel to be filled with rituals, chants, and desperation.”

Trapped in this big, old, rotting house and unable to leave, Sophia executes the exhausting rituals explained to her. These rituals are complex and ornate, not something easily picked up from a library book on the occult. Solomon draws intricate shapes and digits in chalk repeatedly and scours tomes to find the ritual’s proper sequence. Establishing the complexity of ritual is where A Dark Song shines. It leans into perhaps a more realistic portrayal of what it means to summon an otherworldly being, in this case, a guardian angel. Many films, such as Pyewacket, show demonic rituals being conducted after a few hours of research. But here, the ritual takes months and contains increasingly grueling steps. You cannot eat, cannot move, cannot venture into the outside world. This hammers home how wanting access to another realm of being is not so easily procured.

A Dark Song shows that it is not just hell beasts like Hereditary’s King Paimon or Rosemary’s Baby’s Satan that are conjured through ritual. Angels, the winged creatures that dazzle humans with beauty and light, are actually ancient beasts that are more terrifying than expected. You do not just pray to your guardian angel and have your wishes granted. They do not help you without a little personal sacrifice. Personal sacrifice here comes in the form of blood, sweat, and tears. Sophia pushes herself to an almost unbelievable limit in order to get her old life back. As A Dark Song progresses, more and more energy seeps out of both Sophia and Solomon. Their frames become gaunt, their eyes blank, and their words sparse. Their lives are leaking from their bodies and fueling the ritual, but that isn’t apparent at first. Rather, that exhaustion seems futile, as if Solomon is merely ripping Sophia off and playing a twisted mind game.

But, as exhaustion begins to take its toll, the scares begin to seep into the house. Small objects disappear and reappear. Floorboards shift and creak. Sophia hears voices. These occurrences seem to be the product, again, of exhaustion and what happens when the body is deprived of its basic needs. You’re never quite sure what’s happening in A Dark Song and who is in control. Fortunately, the film doesn’t leave you hanging and answers that question in its final moments. It does not necessarily deliver scares; instead, it creates a deep feeling of nauseating awe and dread.

“[A Dark Song] does not necessarily deliver scares; instead, it creates a deep feeling of nauseating awe and dread.”

That is not to say that nothing really happens in A Dark Song. It is the tense and emotionally-charged journey that provides a fascinating character study of two seemingly different characters united by their loneliness and connection to the occult. A rich woman becomes a sympathetic character who is willing to risk everything to get her son back. A schlubby occultist who seems solely focused on money becomes a figure of twisted hope. A Dark Song is the perfect film for those trying to discover more strange occult horror. It’s not necessarily about a cult but hits similar beats with an increased amount of intimacy. Guardian angels are revealed to be something more sinister, and blood is shed in the name of desperation. A Dark Song is a long, arduous journey through hell in a giant house full of nothing but deep, painful sadness.