Blood is usually something people shy away from, but fans of the horror genre consider heroic characters wear it like a badge of honor. Women have and continue to rise to the top of those heroics, going from victims to final girls to heroes and villains. Making it to the ends of these horrifying narratives usually means blood will be shed, sometimes buckets of it, coating these tough women in the color of bravery, survival, and victory. Whether it’s their own blood or from someone or something else, these 10 Tough Horror Women That Are Covered Head-To-Toe In Blood are not afraid of a little gore among other things. They’ve been ranked solely by visual saturation as their strength and courage can hardly be measured by anything else. Zombie films have seen their periods of heydays, with Danny Boyle’s (Trainspotting) 28 Days Later rebirthing the genre in vigor and hostility. Jim wakes up in a London hospital to discover the world has been ravaged by a deadly infection that turns humans into the blood thirsty undead and teams up with Naomie Harris’ (Skyfall) Selena and other survivors to find help. Selena has no hesitations against mercifully bashing in the brains of the infected, sprinkling herself and the walls in aggressive whips of blood in the process. Selena’s fearless reaction speaks to her survival instincts and perseverance to keep herself and others alive, all while being sloshed with blood. She might not be one of the tough women covered in the most gore, but she’s certainly filled with the right guts. Abe Forsythe’s (Down Under) zombie rom-com Little Monsters is heavy on the gore and humor as a group of children and their chaperones are trapped inside of a zoo while a zombie outbreak infects everyone on the premises. Lupita Nyong’o’s (Us) Miss Caroline dons a bright yellow dress and the blood of countless undead targets she maimed to get to safety and protect the school children at all costs, making her one of the most lovely displays of carnage. She manages to play her appearance off and maintain a sweet, calm disposition despite the ironic smatterings of blood and guts all over her outfit. Miss Caroline pretty much looks like a blood-soaked ray of sunshine throughout the whole film and Lupita Nyong’o wears it so well. Matilda Lutz’s (Rings) Jennifer in Coralie Fargeat’s modern rape revenge film, Revenge, is one tough woman. Brutalized by her lover and his two friends on a secluded island, she is bloody from the start thanks to a very unfortunate cliff and tree branch. Between impalement, cauterizing, and combat, Jen is covered in both her blood and that of her enemies with little else clothing to protect or cover her body. In the end Jen takes on the final fight against the man she once trusted. With him layered in just as much blood as she is, I’m sure you can predict who’s the one that makes it out alive. Completely soaked in blood, but still alive. The end imagery of Tobe Hooper’s (Poltergeist) The Texas Chainsaw Massacre is probably some of the most familiar representations of the film. Leatherface angrily dances his chainsaw in circles under the peaking sun as Sally Hardesty, played by Marilyn Burns (Future-Kill), screams in relief and terror from the back of a moving pickup truck escape. The iconic final girl is splattered in blood, bright red sprays all over her fair face, blonde hair, and white flare-leg pants. While the finale is a fresh breath of safety, seeing Sally in the light striped with blood is still upsetting and shocking. Good luck bleaching those pants.

6. Grace Le Domas in Ready Or Not The way a bride looks on her big day is one of the main points of focus when it comes to a wedding and Samara Weaving’s (The Babysitter) Grace is picturesque in Matt Bettinelli-Opin and Tyler Gillett’s (Southbound) Ready Or Not. When Grace finds out that her new husband’s family has a strange wedding night tradition with deadly motives, all bets are off. Sprawled with delicate lace, soft tulle, and heavy splashes of blood from playing for her life and watching others lose theirs, by the time Grace walks out of the blazing estate she has gone from blushing bride to bloody bride. It was a nice day for a red wedding. When it comes to characters of any sorts covered in blood, Carrie White holds the ultimate bucket drop. Sissy Spacek’s (Coal Miner’s Daughter) beloved character in Brian De Palma’s (Scarface) adaptation of Stephen King’s novel, Carrie, caught the attention of the horror genre from the moment she was unexpectedly showered in pig’s blood at her high school prom. Doused in dripping crimson over her innocent pink silk gown with blood running down her face and body, the young woman is horrifically humiliated for the last time. Carrie turns the bloodbath on her classmates as she eerily walks out of the burning auditorium. She may have taken revenge a step or two over the villainy line, but Carrie was tough enough to put up with bullies her whole life and is brave enough to embrace her power and punish the tormentors who have literally branded her in red hot hatred. 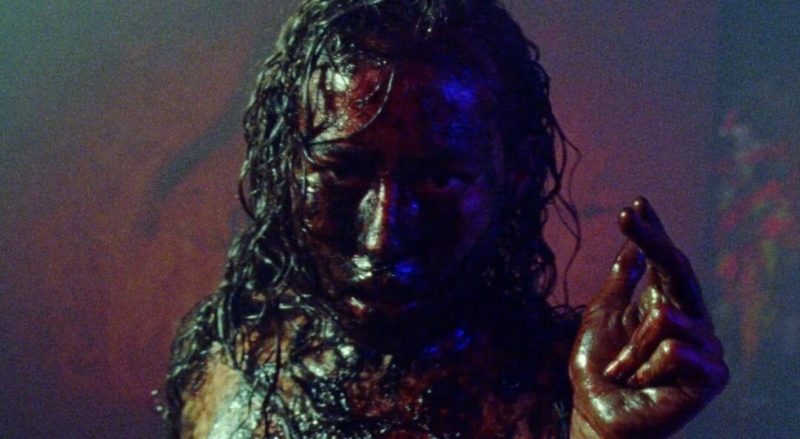 Joe Begos’s (VFW) stylized Bliss paints a modern vampiric portrait of a young artist experiencing an ultimate inspirational high. Dezzy, played by Dora Madison Burge (Friday Night Lights), is on the outs when it comes to producing her work mentally and physically, turning to hallucinogenic drugs and acquaintances that both have a lot of bite to them. As Dezzy undergoes a strange transformation leaving her thirsty and lusting for blood, she finds herself splashed and splattered in gore like a human canvas herself. Draining others and wearing their insides like an expressive piece of art, Dezzy finishes her masterpiece which proves to be a bloody culmination of the film’s many thematic moving parts. Her relentless efforts to resource her talent and flawed character ground her in a strange reality, even if the film itself is explicitly surreal in nature. Surviving a major creative block is tough enough, let alone fulfilling your dark inner urges. There are a lot of key players in Ernest Dickerson’s (Juice) feature length Tales From The Crypt film, Demon Knight, but the most important one is the least expected. Though she is just an average woman with a criminal past trying to make a new start on work release, Jada Pinkett-Smith’s (Scream 2) Jeryline is a resourceful problem-solver with heart and bravery that goes unmatched throughout the film. When she and a group of other boarding residents find themselves in the middle of an ancient demonic war over a mysterious key that unleashes the apocalypse, Jeryline becomes the real hero of the story. Whether she is cleverly coating her body in the key’s blood to disarm The Collector or spitting it into his face, Jeryline takes a red stained stand against evil all on her own. She’s a great unsung hero and admirable final girl through and through… and under all that blood. How do you get your reimagining to stack up against one of the most popularly gory films of the 80’s? Fede Álvarez (Don’t Breathe) answers that question by adding more gore to his The Evil Dead remake, Evil Dead. Mia, played by Jane Levy (Don’t Breathe), is taken out to a cabin in the woods by her brother and friends as a way to power through drug withdrawal. The group is plagued by demonic entities with Mia being revived to be the only one to make it out alive, but not before being completely saturated in a downpour of blood rain. She is drenched from head to toe in an epic showdown against the Abomination and claims victory in an even gorier battle as she takes a chainsaw to its face.

1. Sarah Carter in The Descent Neil Marshall (Dog Soldiers) directed one of the most significantly feminist horror films of the genre with The Descent. Shauna Macdonald’s (White Chamber) strong female lead, Sarah, is trapped inside the confines of a cave along with five of her friends and other unidentifiable mutant creatures with a taste for flesh. As the women try to get back to the surface in one piece, Sarah’s trauma and secrets from the past come into play, driving her to push forward. After fulfilling a wounded friend’s last wish and killing off a number of the mutants, Sarah accidentally plunges into a large pool of human blood. Serving the narrative metaphorically and visually terrifying, her emergence from the gruesome pond is what comes to mind whenever the film is mentioned for many. As the only character to be fully submerged in blood, Sarah reigns as the supreme tough woman covered in blood.

Which of these characters covered head-to-toe in blood is your favorite tough woman in horror? Are there any others who live to tell their bloody tale? Let us know your thoughts over on Twitter, Reddit, or in the Horror Movie Fiend Club on Facebook!