Welcome to Silver Screams! Every month, I’ll guide you through a look at a classic old Hollywood horror film or hidden gem. We’ll explore its history and juicy behind-the-scenes secrets, as well as its legacy and influence on modern horror. This month, we’ll take a look at a groundbreaking French horror film that inspired Hitchcock,

September marks back to school season, a time of transition that sticks with anyone who was ever a child and felt the creeping dread of seeing backpacks and notebooks on sale. Adults who work in education never grow out of the feeling, and while we often teach out of love, the return to the institutional drudgery of school life can feel like a real-life horror film.

“Before Hitchcock made twisty horror suspense nightmares his signature in the 1950s and 60s, there was Les Diaboliques“

It’s therefore surprising that despite the massive amount of school set-horror films in the post-1970s era, there are very few pre-1970 or “classic era” horror films set in a school. Thankfully, one of the few examples is also one of the greatest and most influential horror films of the 1950s, 1955’s Les Diaboliques. Les Diaboliques, which was released in the United States simply as Diaboliques, is a shockingly bleak and effective French horror film with a legacy that cannot be understated. Loosely based on the 1951 French novel “She Who Was No More, “by Pierre Boileau and Thomas Narcejac, the film is thought to be one of the earliest examples of a crime thriller that becomes a true psychological horror film. Before Hitchcock made twisty horror suspense nightmares his signature in the 1950s and 60s, there was Les Diaboliques.

Les Diaboliques is set at a bleak and decaying French boarding school, owned by the frail and fearful South American emigree Christina (Vera Clouzot). Despite her financial ownership of the school, her domineering husband Michel Delassalle (Paul Meurisse) acts as the tyrannical headmaster. He abuses and belittles his wife as well as the boys at the school, openly flaunting his infidelity with science teacher Nicole Horner (Simone Signoret). But Michel is no kinder to Nicole. We meet her as she wears sunglasses indoors to cover a black eye. Nicole is a steely woman of action, and she convinces the timid and cautious Christina to help her murder Michel.

We as the audience cannot help but root for them. Michel is so irredeemable that there is no doubt the world would be a far better place without him. Christina and Nicole pull of a meticulously well-planned crime, and it seems they’ve gotten away with it too. But after dumping his body in the scummy pool on the school grounds, it vanishes. Soon after, a series of strange events occur, and the guilty women begin to lose their grip on reality.

To say any more would be a crime, as Les Diaboliques features an incredible twist so integral to the film that the ending featured a title card with possibly the first-ever spoiler warning. Five years before Hitchcock changed the way films were shown by insisting that no one was to be admitted to Psycho after the beginning of the film, Les Diaboliques ended with this plea; “Ne soyez pas DIABOLIQUES! Ne détruisez pas l’intérêt que pourraient prendre vos amis à ce film. Ne leur racontez pas ce que vous avez vu. Merci pour eux. (Don’t be DEVILS! Don’t destroy the interest that your friends might have in this movie. Don’t tell them what you saw. Thank you, for them.)”

The Birth of True Psychological Horror 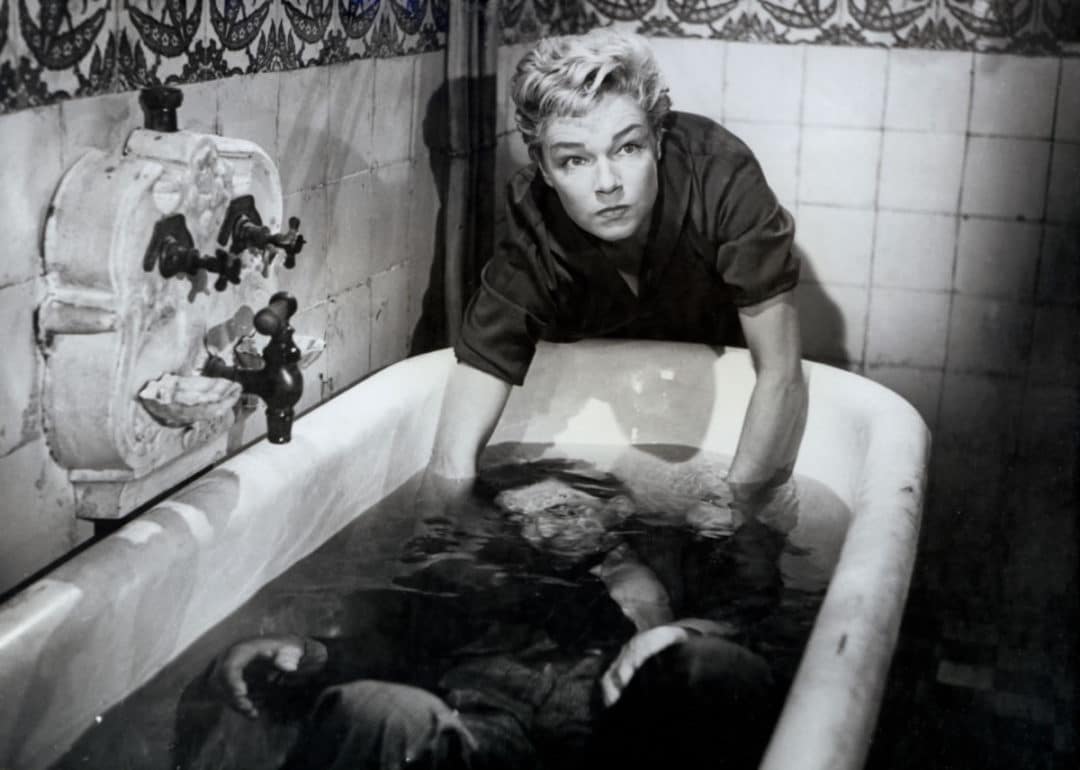 Director Henri-Georges Clouzot holds a unique legacy in French cinema. Unlike many of his contemporaries, who specialized in adapting classic works of French literature, Clouzet gained a reputation as a master of suspense. His repertoire was far less consistent than Hitchcock, but his 1953 thriller The Wages of Fear is considered a masterpiece, albeit a strange and difficult to classify entry into the thriller genre. Clouzot would eventually be blackballed by the emerging French New Wave as a member of the irredeemable old guard, and his career would never recover despite his previous success. It’s a shame since he was far from a traditionalist director.

Les Diaboliques predicts techniques of modern horror far more than its contemporaries. The film is firmly based in a bleak and morally corrupt reality. The haunting opening credits focus on the slimy algae infested surface of the pool that will later be used in the murder. It’s accompanied by a haunting piece of music by composer George Van Parys. Dissonant organs are joined by a children’s choir matching the harsh notes and minor key. It puts the viewer in a state of fear and unease before the film even begins. Paired with the slimy pool hiding decay beneath its blackened surface, the themes of the film are already apparent. The school is supposed to raise children up into society, but it’s a reflection of the dark and evil potential of humanity hiding beneath the surface.

Clouzot shoots the boarding school as a dank and decaying place plagued by mud and fog. A car runs over a child’s toy boat afloat in a muddy puddle — innocence crushed by reality. A group of boys is seen emulating the abusive nature of their headmaster, and one boy with a powerful intuition and imagination is constantly punished for it. The school setting of Les Diaboliques is no coincidence, it’s central to the theme of the corrupting influence of society on human nature. It’s a shame Clouzot was rejected by the French New Wave — his work demonstrates a subversive point of view that would have fit right in.

The jaw-dropping twist of Les Diaboliques is mirrored in countless psychological horror films of today. The unique structure of the film — a realistic thriller that slowly slips into a potentially supernatural nightmare — influenced filmmakers from Hitchcock to Kubrick. Hitchcock himself reportedly tried to get the adaptation rights to “She Who Was No More” and was narrowly beaten to it by Clouzot. He finally got a shot a directing an adaptation of a Boileau-Narcejac novel in 1958 with Vertigo, which was based on the writing duos’ 1954 novel “From Among the Dead.” The master of suspense was so impressed by Clouzot’s film that he drew inspiration from it for Vertigo and Psycho, screening it for his screenwriters before beginning production on both films. The bones of Psycho are certainly present in Les Diaboliques. The first half of the film puts the viewer in league with a murder, building suspense out of our fear that the guilty will be caught and implicating our sympathy. And beyond the similarities of a twist ending, both films use water and bathrooms to terrifying effect.

Pyscho isn’t the only iconic horror film that owes a debt to Les Diaboliques. A terrifying moment with a typewriter is a clear influence on the “All work and no play makes Jack a dull boy” sequence in Kubrick’s The Shining. Another sequence featuring a bathtub was drawn upon by Stephen King in the original “The Shining” novel as well. Les Diaboliques was a box office smash in France, and a hit with audiences and critics internationally. Today it’s regarded as a masterpiece of horror. Its bleak vision of human nature is ahead of its time, as is its structure and scares. The suspense works as brilliantly today as it did in 1955, and some of the film’s images will haunt your dreams. The performances are phenomenal. Véra Clouzot, the director’s wife, is a perfect embodiment of beaten down fear and quiet determination. Simone Signoret is an effective contrast as her world-weary and tough partner in crime, and Paul Meurisse manages to make every word, every movement, intimidating and loathsome. The side characters bring life to the world — from the boys at the school to the nosy locals and self-absorbed teachers. And Charles Vanel steals scenes as the late-arriving private investigator who tries to help Christina find her missing husband, unaware of her involvement and much to the distress of the guilty parties.

If you’re a teacher, student or parent feeling the weight of being now well into a new school year, Les Diaboliques may be the perfect salve. It captures all the worst potentials of school and in turn, makes you thankful at how much better your situation surely is. At least you’re not forced to eat rotten fish by the abusive headmaster — at least I hope!

And even if you’re not looking for a good antidote to the back to school blues, Les Diaboliques is a must-watch. If you haven’t seen it, avoid spoilers at all costs. If you have, it’s still worth a revisit. It’s wonderfully creepy and atmospheric, and the scares hold up. It’s a perfect appetizer for the cool air and stormy nights of fall horror season.

Until next month, classy fiends, enjoy those Silver Screams! Share your thoughts on Les Diaboliques with the Nightmare on Film Street community on Twitter, in our Official Subreddit, or in the Fiend Club Facebook Group! Or, while you’re here – check out previous editions of Silver Screams for your classic horror fix!