There’s something about November that calls for ghost stories. This month is an odd liminal space between the outward spookiness of Halloween and the more subtle, but traditionally ghostly, Christmas season. Meanwhile, the days are shorter, the winds blow colder, and the trees are bare and skeletal. There’s a sadness to the month that fits the melancholy of ghost stories perfectly. That’s why this month, we’re going to dive into one of the very best haunted house films of all time, The Uninvited. It also happens to be, quite possibly, the first true example of the haunted house subgenre.

“The Uninvited was something entirely different and brand new for the era.  Its ghosts are real, and it takes the haunting, and the tragic history behind it, seriously.”

Released in 1944, The Uninvited was the cinematic directorial debut of British theater director Lewis Allen. Unlike many directors with a background in theater, Allen’s skills not only survived a change in medium, but they also lend an air of subdued atmosphere and impeccable construction to The Uninvited. The film is based on the novel by Dorothy Macardle, and it was advertised as having been based on “the most popular mystery romance since Rebecca!”

The film shares atmospheric and some thematic similarities with Daphne du Maurier’s 1938 novel, as well as Alfred Hitchcock’s masterful 1940 adaptation. Both were such popular and critical hits that it makes sense that Paramount Pictures would advertise its new gothic mystery as Rebecca’s successor. But The Uninvited is, in fact, very different, and with it, Paramount was unknowingly making horror film history.

The Uninvited is set on the craggy coast of Cornwall, England. London composer and music critic Rick Fitzgerald (Ray Milland) and his sister Pamela (Ruth Hussey) are vacationing away from the city when they stumble upon a grand, abandoned house on a rocky seaside cliff. They fall in love with the home, its dramatic setting, and striking spiral staircase. Pamela feels immediately that it’s her dream house, and Rick is sure that escaping the city will help him find the inspiration he needs to be a full-time composer. The siblings decide to find out if the property is for sale. In fact, Windward House, as it’s known, is on the market. The property’s owner, Commander Beech (Donald Crisp), is strangely eager to part with the property, selling it to Rick and Pamela for a song. Beech’s granddaughter, Stella Meredith (Gail Russell), is less enthusiastic to see Windward leave the family. Despite the fact she only lived there until she was three, and that Windward was the sight of her mother, Mary Meredith’s, untimely death, Stella feels strangely drawn to the place.

Shortly after moving in, Rick and Pamela begin to experience strange occurrences. A previously locked room is oddly cold and unsettling, doors slam on their own, their dog runs away, and their housekeeper’s cat refuses to ascend the spiral stairs. Most troubling of all is the disembodied sobbing that occasionally echoes through the house in the pre-dawn hours.  Meanwhile, Stella and Rick begin a cautious romance, and all the while Stella feels a continued, increasingly threatening, pull toward Windward House. The Uninvited is a tense and surprisingly frightening horror film. The 1940s was a transitional decade for horror. The 30s were defined by the revolutionary Universal Monster films. Universal’s horror empire was built on atmospheric, monster-centric films that were highly effective, but more fantastical than genuinely scary.

The 40s saw a decline in the quality of Universal Horror, with the exception of The Wolf Man (1941). Meanwhile, Val Lewton was creating forward-thinking horror films for RKO that were unexpectedly modern and chilling in their subtlety. With its noirish visuals and understated scares, The Uninvited feels very much like a Lewton film in style and effect. But it was a fluke for Paramount, which rarely dabbled in horror.

“[The Uninvited‘s] approach to ghosts as echoes of the past holds thematic influence on every haunted horror to follow.”

The Uninvited was influential far beyond its style. In the 20s and 30s, films about ghosts or haunted houses were never truly supernatural. Most fell into the “old dark house” sub-genre, which featured colorful characters and comedy to balance out the scares. Ultimately, a Scooby-Doo style twist would explain away all the apparent ghosts as the work of humans. The Cat and the Canary (1927, remade in ‘39) epitomizes the ghost films of the era.

The Uninvited was something entirely different and brand new for the era. Its ghosts are real, and it takes the haunting, and the tragic history behind it, seriously. It revolutionized many common themes and tropes of the modern haunted house film. From plot points like frightened pets, cold spots, seances gone awry and possession — to its complex psychological themes, The Uninvited presents hauntings as the remnants of past pains, evil, suffering, and injustice on a place. Its approach to ghosts as echoes of the past holds thematic influence on every haunted horror to follow.

The Uninvited is eerie, unsettling, and incredibly suspenseful, even by today’s standards. Much of this can be attributed to cinematographer Charles Lang’s inky, atmospheric work on the film, for which he earned an Oscar nomination. Black and white suits horror beautifully and The Uninvited exemplifies why.

Windward House is illuminated by gas and candlelight, and Lang took this opportunity of the plot to create heavily shadowed shots throughout the film. The look of The Uninvited has the influence of film noir all over it. Figures are often shot in silhouette, and unique camera angles give the viewer the uneasy sense of an invisible presence watching the proceedings. The shadows and dark corners of Windward are a deep, utterly impenetrable black. The sense of not knowing what could be lurking in the corners of any scene is incredibly effective. It’s one of the key ingredients to the film’s scares.

“Beyond the scares, The Uninvited features a brilliantly constructed mystery.”

Despite its effective use of suggestion, the ghosts of The Uninvited aren’t afraid to be seen. The special effects sequences of the film were eleventh-hour additions by Paramount, which worried audiences would be confused by a story with merely unseen ghosts. But despite their corporate motivation, the scenes work. The misty manifestations don’t detract from the effectiveness of the film but are, in fact, frightening in their own right. Its apparitions are hauntingly believable and understated, never clunky or dated.

Beyond the scares, The Uninvited features a brilliantly constructed mystery. The question of what occurred at Windward House, and what it’s restless spirits want with Stella, is brilliantly revealed in an expertly paced plot that keeps the audience guessing up to the very end. The characters are vivid and engaging. Gail Russell gives a beautifully wounded, naive, and vulnerable performance in her film debut as Stella. Rick and Pamela are both warm, scrappy and determined. They face the threats of the dead with appropriate unease, but they never lose their dedication to uncovering the truth. The siblings are comforting anchors of life and humor among the underlying sadness and evil of the hauntings. 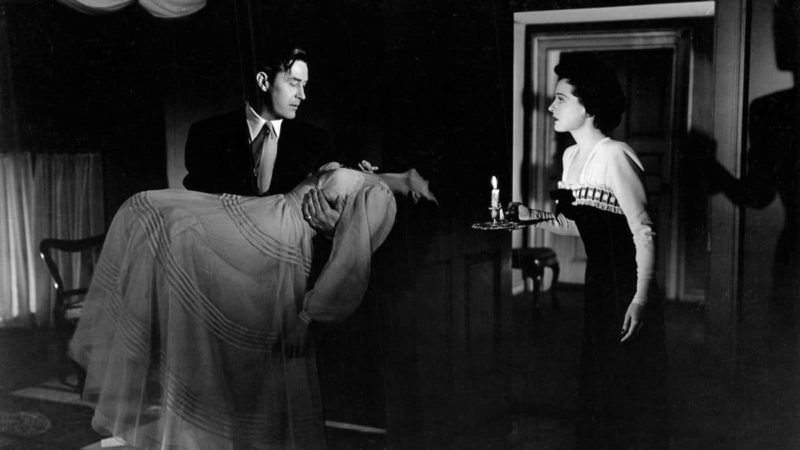 Finally, The Uninvited features a wonderful score by Victor Young. The film’s melancholy main theme, “Stella by Starlight,” went on to become a famous jazz standard, immortalized by greats like Charlie Parker and Miles Davis. The song exists within the plot as a serenade composed by Rick for Stella, and it’s a key feature in one of the film’s most haunting scenes.

The influence of The Uninvited on every haunted house film that followed cannot be understated. Guillermo Del Toro lists it among his personal favorites and most treasured influences. You can see the imprint of the film on his own ghost stories, including The Devil’s Backbone and Crimson Peak. It paved the way for the new era of psychologically complex supernatural horror that would come to fruition in the 1960s.

[The Uninvited‘s] eerie scares and haunting mystery will stick with you far beyond the end credits,

Despite all this, The Uninvited is frustratingly difficult to see. It’s not currently streaming and is one of the rare films unavailable for digital purchase on Amazon. Thankfully, The Criterion Collection (savior of underseen classics!) released a gorgeous, restored print of the film on Blu-Ray. Perhaps it will be available to stream through the recently announced Criterion Channel in spring 2019 (Which I hope all of you will consider supporting. Seriously, we need platforms for streaming classic horror, and if Del Toro commands, we must obey).

Until then, spring for the Blu-Ray. The Uninvited is worth it. It’s a powerful ghost story that defined a genre. Its eerie scares and haunting mystery will stick with you far beyond the end credits, like a wistful piano tune, an aroma dripping in memory, or a mysterious cry in the night. Until next month, stay classy fiends, enjoy those Silver Screams!