Slay Together, Stay Together: The 10 Best Killer Couples in Horror

Valentine’s Day is just around the corner and love is in the air! We have obsessively delved into a sea of Killer Couples who stay together because they slayed together. These may not be the healthiest examples of relationships, but they are couples we adore. Who are we to judge anyway? Nobody truly knows what goes on between a couple except the two who are in it, and all of the corpses in their wake.

Join us in analyzing 10 of Horror’s Best Killer Couples:

Hounds of Love is a wicked little film about John (Stephen Curry) and Evelyn (Emma Booth), an extremely disturbed couple that stalks young women, looking for someone to bring into their twisted relationship. Vicki Maloney (Ashleigh Cummings) chose the wrong night to sneak out to a party as the teen becomes the object of their desire.

Throughout the film, John and Evelyn unleash physical and mental tortures on Vicki based around their own manipulation of each other. This was a brutal watch, as emotionally abusive things often are, but it was also extremely rewarding. If you want to take a little more of a dangerous journey with someone you love, see if your relationship can handle the Hounds of Love.

The Frighteners marked the US debut of Peter Jackson and a return to Horror/Comedy for Michael J Fox. Fox plays Frank Banister, a paranormal detective, a real life Ghostbuster who utilizes the services of the undead in his con game. A series of strange deaths start to follow Frank, which raises the suspicions of local law enforcement, most notably from the incredible Jeffery Combs playing a bonkers version of Fox Mulder.

Patricia (Dee Wallace) and Johnny Bartlet (Jake Busey) may not be the center of the film, but their killer romance is what propels everything forward. Dee matches Combs note for note in her insanity, showing why she is a legendary horror actress. This is the first film on the list to be inspired by Charles Starkweather, but not the last. The film’s unique take on the true-life case of lovers involved in a spree killing places it firmly on the list. It’s tough to get at how we find out the couple is at the center of this story without spoiling too much, so please, check out The Frighteners if you haven’t already.

At first, Sadie (Brianna Hildebrand) and McKayla (Alexandra Shipp) were added to this list to represent all the BFFs out there for this season. Watching it again, they might actually be the coming of age for a couple that should be much higher on this list. Slight spoilers ahead.

Sadie and McKayla run the blog “Tragedy Girls” and are desperate to gain more viewership. Their best idea to boost their ratings is to start a killing spree in their home town. McKayla has no problem disposing of her teen crush Toby (Josh Hutcherson), but Sadie can’t do away with Jordan (Jack Quaid) as easily. When she finally does, Sadie and McKayla burn down everything that represents their past, holding hands tightly while the flames grow. It’s filled with fun murder and mayhem, but the metaphor surrounding this killer couple sticks around long after the fire stops smoldering. As the world collapses around them, Shaun (Simon Pegg) and Liz (Kate Ashfield) are drawn out of their rut and brought closer together through a zombie apocalypse. Before they encounter the walking undead, their relationship consisted of every evening spent at the same bar, Shaun taking every one of Liz’s needs for granted, and his sloppy best friend Ed (Nick Frost) wedging his way in between everyone.

While they slash and paddle their way through the zombie hordes, their journey takes them back to the same old bar, but they aren’t led by the same old Shaun. His actions save the lives of some of his friends, and his relationship with Liz. Veronica (Winona Ryder) is the only unique one in a clique full of Heathers. She both wants to fit in and disdains the popularity she has achieved. Enter handsome and dangerous loner JD (Christian Slater). When their eyes meet, sparks fly, and classmates die. JD has a unique way of dealing with people he views as problems: murders disguised as suicides. The murders rock the school in a way that Veronica never saw coming, immortalizing the victims as even more popular than they were before. Suicide becomes trendy in this wicked satire of clique culture.

Veronica and JD were a killer couple who captured the minds of most of the youth in the late 80’s/early ’90s. For the first part of the film, they were exacting the type of revenge many young underdogs and outsiders could only dream of. Heathers is required viewing. “If you wanna fuck with the Eagles, you gotta learn to fly.”

Mickey (Woody Harrelson) and Mallory Knox (Juliette Lewis) terrorize route 666 in this Oliver Stone cult classic, adapted from a Quentin Tarantino script. The film centers on the killing spree they embark on over a short period of time, but the reflection of society’s love affair with maniacs like Mickey and Mallory is what makes this an enduring classic.

After escaping prison to rescue her from an abusive household, Mickey takes Mallory on a reign of terror that lasts over 6 weeks. They go from strangers to lovers, to spouses, to trying to spice up their relationship with a hostage or other women within a short period of time. This is the same period of obsession we have with figures like Mickey and Mallory. The montage of televised trials at the end hits this home and makes it an enduring film that all of us will stay with. Not even the bondage of prison can extinguish the love of this killer pair. Based on sheer adorableness, Chucky (Brad Dourif) and Tiffany (Jennifer Tilly) are in the argument for horror’s greatest couple. Ronny Yu’s reboot of the Child’s Play franchise worked better than most attempts studios have made. From the start, this flick knows exactly what it is. The opening scene introduces us to an evidence locker containing a chainsaw, hockey mask, a William Shatner mask, a glove with finger knives, and a Good Guy Doll. Yes, we are in a world where all the maniacs exist, and Chucky gets his release from a crooked cop. Tiffany has paid to have him bought out, an idea that quickly turns bad for her. After again invoking the voodoo curse on the doll, Chucky is brought back to life and has ideas on how to reclaim his girlfriend.

The main horror franchises represented in the evidence locker bear striking similarities to the Universal Monster Franchise. One of the greatest touches in this film is how it invoked Bride of Frankenstein in Human Tiffany’s death. Chucky and Tiffany get the opportunity to unleash the mayhem Frankenstein’s Monster and his Bride Elsa never got.

Candyman/Daniel Robitaille (Tony Todd) has crossed oceans of time to find Helen (Virginia Madsen) the woman he once loved, much like Dracula and Mina in Bram Stoker’s Dracula, which was released the same year. Candyman tells the story of the son of a slave who falls for a white woman in the wrong time period. Daniel was murdered for his crime of love and became the immortal being/urban legend Candyman that permeates the Cabrini-Green housing projects of Chicago. Much like a vampire, Candyman must be invited in by his victims, the repetition of his name being the tool for summoning.

Helen is a Ph.D. student who becomes obsessed with his story and ultimately accused of his crimes. The romance between her and Candyman was one of the most haunting of the ’90s horror cycle. Like the mythic being, the film is something that will return again, next from producer Jordan Peele.

In the same year that Twilight gave us Vampires who sparkle, Sweden gave us one with some real teeth. Oskar (Kare Hedebrant) is about the loneliest boy in Sweden. Director Tomas Alfredson introduces him on long shots in the frozen playground of his apartment complex. He’s alone in the night until he is joined by Eli (Lina Leandersson), who he learns through the film is an immortal being.

Eli needs human companionship, and since she is immortal, there is often a vacancy in that position. An outsider like Oskar seems the perfect fit, and he appears to have absolutely no problem accepting the role. In exchange, Eli teaches Oskar how to deal with his vicious bullies. Aside from some excellent violence, this is a touching story that every horror lover should see. When people think of the Hellraiser franchise, their first thought is probably of Pinhead (Doug Bradley), but he is a very minor part of the first film. The Cenobites are memorable for sure, but the first film is a family horror with an affair front and center. Julia (Clare Higgins) is so dissatisfied with her husband Larry (Andrew Robinson) that she has an affair with his brother Frank (Sean Chapman/Oliver Smith). Larry comes across as a safe family man who is there to support his family but Frank is anything but that. He’s into the occult and brings Julia into his darkness through the film.

As Joe Bob Briggs said in his glorious segments from The Last Drive-In on Shudder, Frank must have had some great “attributes” for Julia to go to the lengths she does to bring him back. The love from their affair ran so deep that she has to bring him back through blood sacrifice, and continues killing for him to regain his original form. Hellraiser is one of those films that sticks with viewers forever, and a huge part of that is the affair between Frank and Julia.

These are the films that warm the dark recesses of our Horrored hearts. Which ones inspire you this Valentines season? Let us know on Twitter, in the official NOFS Subreddit, and on Facebook in the Horror Movie Fiend Club! 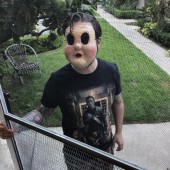 Horror-obsessed since being taken to see "April Fools Day" in the theater at 6 years old. Believer in Simulation Theory. Host of Andrew Watches Movies Podcast.