Smoke ‘Em If You Got ‘Em: 10 Primo Pot Smokin’ Horrors Perfect For Your Next Session

It’s April kiddies, and that can only mean two things. One, it’s springtime and everyone loves spring. Two, it’s Reaper Madness Month at Nightmare on Film Street and that means we’re giving you all things Grim Reaper and all things grim reefer.

Since 4/20 is fast approaching we thought we’d break out the bong, get nicely toasted, and compile a list of Ten Primo Pot Smokin’ Horrors For Your Next Session. So grab a gram of your favorite blend and let’s get baked as we dive into our list… uh… wait, before we start, pass me some pizza and a Mountain Dew, dude. On 4/20 hippie blood will run through the woods as a group of carefree friends head to the Redwood Forest for the annual American Free Love Music Festival for a weekend of bud, hedonism, and groovy tuneage. Unbeknownst to them, however, a killer with a slight Ronald Regan fetish is on the loose and he’s huntin’ hippies with an axe. This David Arquette (Scream, 1996) directed stoner slasher not only boasts an abundance premium 4/20 kush, but it also has an all-star cast including Courtney Cox (Scream 2, 1997), Thomas Jane (The Mist, 2007), Lukas Haas (Lady in White, 1988) and former weed aficionado Jason Mewes (Hallweed, 2016). With a premise like this, we can just include the whole movie as out number 10 reefer in horror moment. When five friends arrive at a “cabin in the woods” for a vacation, they soon fall victim one by one to a horde of backwood zombies. Little do they know is that their fate is at the hands of a couple of scientists who unleash more hell than even they can handle. Among the typical stereotypes in the film is Marty, played by Fran Kranz (You Might Be the Killer, 2018). Marty is the token tokin’ and despite his chronic penchant for the chronic, he has a lot of deep insight into what’s happening to him and his friends while staying at this cabin and despite being ignored because of his perpetual high, he actually ends up saving the day… sort of.

The correlation between pot and Poltergeist may not seem obvious at first, but if you recall, Steven and Diane Freeling have a bit of a taste for the Takkouri. It’s late in the evening, Robbie and Carol-Anne are in bed, Dana is at her friend’s, and the Freeling parents are feeling funky. Steve, played by Craig T. Nelson (The Devil’s Advocate, 1997) attempts to roll a joint while Diane, played by JoBeth Williams (Within, 2016) blazes on one she’s already been working on. It’s a smoke-filled scene that runs the emotional gambit from foggy nostalgia to increasing paranoia, so well written and masterfully acted the transitions are seamless. It’s like being right there with the Freelings as they hotbox their bedroom. So far most of the reefer reels on this list have been light-hearted moments within overall frightening films but in Ari Aster’s Hereditary, that 4/20 moment proves to be downright gutwrenching. While at a party, Peter, played by Alex Wolff (My Friend Dahmer) blazes with a bud to escape his disintegrating family life for a couple of hours. His weird little sister Charlie, played by Milly Shapiro (JJ Villard’s Fairy Tales, 2020), tags along but is soon struck with a life-threatening allergic reaction to something she eats. What follows is known as “the” scene in Hereditary and for those that haven’t seen the film yet, I’ll spare you the spoiler but it is as poetic as it is shocking. It’s the catalyst for the rest of the movie and it’s a proper punch to the gut. All I can say without spoiling the moment is that one should never toke and drive. The next film on our list does nothing to hide its weed content. In fact, it’s pretty much all about weed. Star Leaf is an indie film that finds a group of stoners on a trip to visit their dealer who lives in a van deep in the woods. He reluctantly introduces them to a crop of weed that is literally from out of this world. The rules are simple, take nothing from the crop and no harm will come to you but when one of the stoners decides to take a gram or two for a souvenir, their trip is about to go bad… real bad. Once they find out who’s guarding the cosmic crop, they’ll wish it was only drug cartels they’re dealing with. Now, these potheads must face off against the intergalactic guardians of the green if they want to live to smoke another blunt again.

Everybody knows the scene and if you don’t you have been living in a fallout bunker for the past 43 years. In John Carpenter’s iconic Halloween, babysitter Laurie Strode, played by scream queen Jamie Lee Curtis (Prom Night, 1980) is stalked by escaped mental patient Michael Myers, played by Nick Castle (Escape From New York, 1981) and fights for her life as her friends are murdered by the maniac. But the scene in question has nothing to do with Myers or the murders he would commit. This scene is the calm before the storm where Laurie and her friend Annie, played by Nancy Keyes (The Fog, 1980), drive to their respective babysitting gigs together. To take the edge of dealing with Tommy Doyle and Lindsay Wallace, the pair hotbox Annie’s car on the way to Orange Grove where that buzz they blazed, will be gone as soon as Myers shows up.

The one everyone was waiting for, Freddy vs. Jason, had two of horror’s biggest icons squaring off against each other for a battle unlike anything fans of either franchise had ever seen before. While the success of the end result depends on who you talk to, there are some definitely memorable moments and one of them is Bill Freeburg, played by Kyle Labine (Scary Stories to Tell in the Dark, 2019). Freeburg, the pot-smoking stoner who not only gets possessed by Freddy Krueger while being high AF he also takes on Jason Voorhees only to be sliced in half for his efforts. He may be a stereotype and he may be a Jason Mews knock-off but Freeburg is one of the highlights of Freddy vs. Jason. 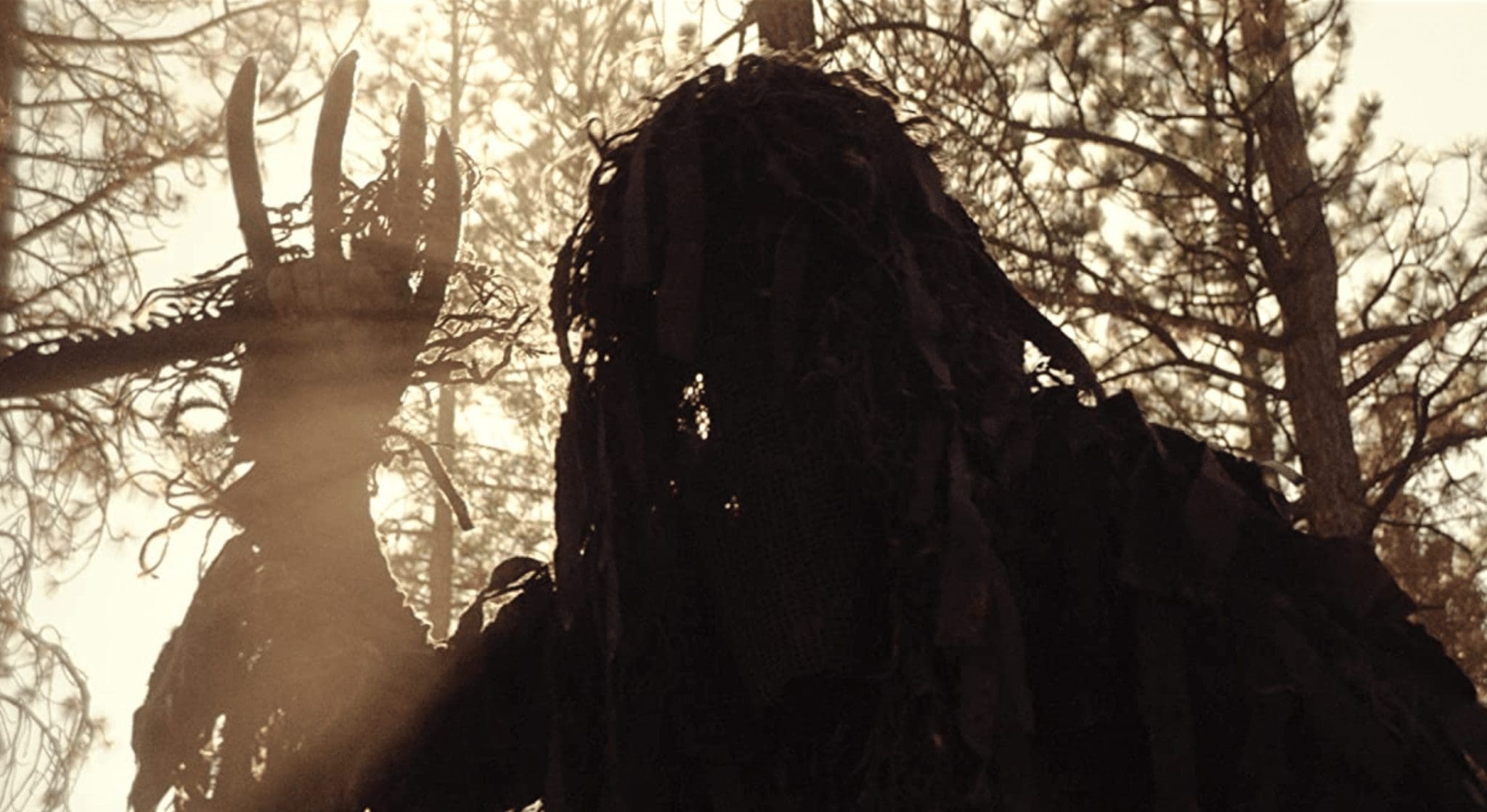 Treading on the familiar ground within the stoner-horror sub-genre, 4/20 Massacre follows a group of young women who venture into the woods for some camping to celebrate a friend’s birthday which just so happens to fall on April 20th. When they encounter an illegal grow op their idyllic camping trip turns into a nightmare. As the ladies head to their campsite, they encounter a man running for his life. Before he runs off into the forest, in a real prophet of doom moment, he warns that they’re all next, sticks them with a backpack full of weed from the grow op, and bails on them. The girls ignore his warnings and break out the bongs to sample the goods painting a big green target on their backs. What’s a lazy teenage herbalist to do when his right hand is possessed by a demonic force that sets about on a murderous rampage? If you’re Anton Tobias, played by Devon Sawa (Hunter Hunter, 2020), you kill your two best friends, who come back to life as zombies to help you out, and you try and win over the heart of the cute next-door neighbor. But in order to get to the madness that follows, we have to go back to the beginning. We meet Anton as he wakes and bakes on his parent’s couch using his asthma inhaler as his pipe. Who says stoners aren’t resourceful? Things go from mildly annoying to worse as Anton soon finds he’s out of weed and after a call to his dealer, he begins on a journey that is totally going to harsh his buzz. I could have made this list entirely from Friday the 13th franchise entries. Dope and Jason go hand in severed hand in the Friday the 13th universe. If it’s not Jack taking an arrow through the gullet for toking in bed in the 1980 original, it’s Eddie getting shanked in the kitchen after he meets Jason while satisfying his munchies in The New Blood. But Friday the 13th Part III in 3D has arguably the most toke for your buck as it features not one, but two cannabisseurs, and let me tell you, they don’t disappoint. Chuck, played by David Katmis (The First Power, 1990), and Chili, played by Rachel Howard (Deep Space, 1988) are the Cheek and Chong of Crystal Lake.

The van ride to Chris’ cabin alone results in the whole gang ingesting enough weed to mess up even Hunter S. Thompson. At one point the van is thought to be on fire as smoke billows out every window but nope, it’s just bong smoking Chuck and Chili hotboxing the vehicle. Let’s not forget Chuck’s visit to the cabin’s outhouse. He smokes enough for the actual porta-potty to start shaking. Heavy sh*t, indeed! And of course, Chili’s mouth agape, couch pass-out is a textbook stoner moment. Smoke until you sleep. In fact, there are far too many moments in Friday the 13th Part III to narrow it down to one.

What are your favorite stoner horrors? Let us know what movie you like to watch while “relaxing” over on Twitter, Reddit, Facebook, and in the official Nightmare on Film Street Discord. Not a social media fan? Get more horror delivered straight to your inbox by joining the Neighbourhood Watch Newsletter.