Not just in North America, but all over the world fiction is filled with examples of storytellers utilizing the history of their respective geographical areas to add layers of terror to their tales. At times it can just be a stereotypical “old thing comes back to kill” trope that still has its merits, but sometimes, it plays a more integral role.

It’s Stephen King month here at Nightmare on Film Street, and the work of this influential horror author is littered with North American history and Native American inspiration that enhances his dark stories by adding knowledge of very real atrocities from the not-so-distant past. Forcing the audience to come to terms with things most would rather forget while spinning classic, terrifying fiction like only Stephen King can. 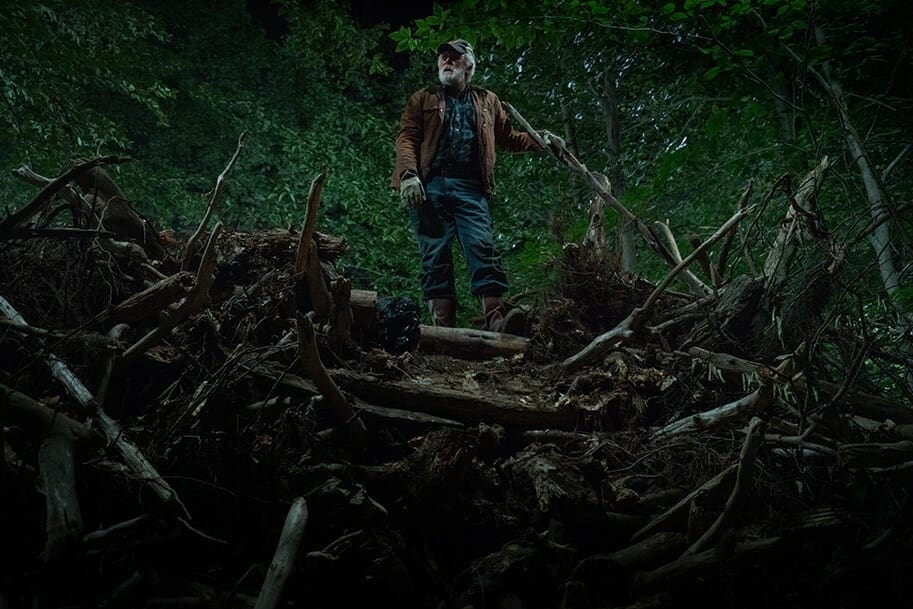 Of course, the most glaring example of King’s use of Native American folklore in his work is, hands down, Pet Sematary. Released in 1983, the years before and after the novel were chock full of stories that used the “Indian Burial Ground” trope to various degrees, such as the massively successful The Amityville Horror (1979). King’s usage was much more impressive as it was more immersive and up-front. Rather than the cemetery and its lore being revealed late in the story as the driving force behind the evil, it’s used here as the setting itself.

This first adaptation of King’s novel, Mary Lambert’s Pet Sematary (1989) however left out one major plot point, one that tied its concept closer together with Indian folklore: The Wendigo.

The Wendigo is a creature out of Native folklore that takes the role of the malevolent presence in the woods surrounding Ludlow, Maine. Described by Stephen King himself in the novel, this legendary creature is revoltingly horrifying:

its eyes tilted up like the eyes in a classical Chinese painting, were a rich yellowish gray, sunken, gleaming. The mouth was drawn out in a rictus, the lower lip was turned inside out, revealing teeth stained blackish-brown and worn almost to nubs. But what struck Louis were the ears, which were not ears at all, but curving horns…they were not like devil’s horns; they were ram’s horns.

While not appearing in the (decaying) flesh per se, its influence is felt all throughout King’s novel and subsequent film. It’s what potentially causes the tragedies that occur, it manipulates those stricken with grief and promises to return that which was taken from them. It holds dominion over all on its land. This is not far from the Algonquian Wendigo from which King no doubt borrowed heavily. According to Algonquian folklore this evil spirit inhabited the northern forests of the Atlantic Coast and Great Lakes Region of the United States and Canada. Which puts Ludlow, Maine within the historical region that the Wendigo has been associated with. This land was originally settled and inhabited by the Mi’kmaq. These First Nations people were the first settlers to this area and as such have a long and rich history here. In Pet Sematary it’s explained that the Indigenous Mi’kmaq encountered the Wendigo spirit long ago and it cursed their burial ground, turning the soil “sour”. Forcing them to leave their home, and their cemetery behind. Diving a bit deeper into Native history, King also saw fit to include relevant and less supernatural aspects of the Wendigo fable.

The Wendigo as a metaphorical concept was linked to certain behaviors like greed, murder and cannibalism. During harsh winters food scarcity was a very real threat to early settlers and some resorted to cannibalism in order to survive. A terrible and psychologically damaging turn of events that drove many to the edge of madness and beyond would come to be known in modern medicine as Wendigo Psychosis. This affliction, while not an actual illness, could have inspired the sway that the Wendigo held over King’s characters. Pulling the strings from the shadows out of the tragic history of the land.

The legend of the Wendigo played a bit more heavily into the story in the 2019 remake; Pet Sematary. While essentially the same story as the original, the folklore received more of the spotlight. John Lithgow’s character, Jud Crandall, seems to be somewhat of a local expert on the history of the area:

They feared that place. There’s something up there. Something that dates way back. Those woods belong to something else. Something … that brings things back.

Now I am not brave enough to venture a guess as to exactly what goes on in the mind of Stephen King. What a wonderfully scary place that must be! But I believe there is something a bit deeper at play here. In the novel and the pair of films the dead, human and other, return to life after being laid to rest in the burial ground past the deadfall. The tagline “Sometimes dead is better” is resoundingly appropriate; they are not the same on their return. A hollow shell of who they once were filled to the brim with an ancient, bloodthirsty and vengeful evil. The concept at play here is that European settlers stole this land. Bringing with them violence that swept the nation and decimated a people. Now, centuries later, the sins of our collective fathers have come back to haunt us, to buck the invaders off the land. Inherent, subconscious guilt plays out in the guise of a classic horror tale. Even if this is unintentional it is not a stretch to apply that lens over this work of fiction and see how well it actually fits, which only adds to the unsettling nature of King’s work. Shining A Light On The Past

The Shining (1980) is a good example, and the most infamous for sure, of liberties being taken with Stephen King’s work in order to make the transition from page to screen. Stanley Kubrick’s masterpiece, adapted from King’s 1977 novel took great strides away from the source material. In the original novel, there is actually no mention of an Indian burial ground or any Native American influence at all really. Enter Kubrick…

It’s only a throw-away line at the beginning of the film. As the hotel manager is giving Jack and the Torrance’s a tour of the Overlook Hotel he drops that the hotel is built on….yup, an old Indian burial ground.

Of course it is.

Here’s where it gets a little crazy.

The background scenes are loaded with Native American iconography. Calumet baking soda cans, Navajo wall rugs and more. So much more that people started to get the idea that the film was about more than just murders at the Overlook and that a larger narrative was at play. An article written in 1987 by Bill Blakemore, an ABC News correspondent, lays it all out perfectly and it’s pretty darn convincing.

Again, Stephen King did not include ANY of this in his novel and it’s pretty well-known that he had some major disagreements and critiques of Kubrick’s interpretation of his original premise, but the influence is definitely felt in the film that bears King’s name. Reading Between The Lines

Many of Stephen King’s novels, novellas and short stories take part in small towns throughout the United States. These typically quiet pockets of American life hide a darker and more sinister layer just beneath the surface. Where long-forgotten history returns to draw blood.

In the television miniseries Rose Red (2002), the mansion that is the focus of the series is said to be built on top of a Native American burial ground. That’s literally the only time it’s ever mentioned but it is meant to hint that the source of the ensuing horror is in part due to that fact.

A character in the novel The Girl Who Loved Tom Gordon could also be seen as a call-back to the Wendigo from Pet Sematary. In the story, the protagonist is lost in the woods after being separated from her parents on a hiking trip and begins to believe (or hallucinate) that she is being stalked by some “thing” she calls the God of the Lost. This creature takes several forms in the story but is representative of nature and of spirits hunting down wayward travelers trespassing through its domain.

Much of these are not necessarily implied from King’s stories rather they are inferred by those reading and watching. Still, it’s fascinating holding these works up to the very real history of the country and drawing comparisons and possible parallels between the two. It’s also worth noting that some of King’s inspiration came not solely from actual history but from other prolific horror and dark fantasy authors that preceded him! Such as Algernon Blackwood’s short story from 1910 titled The Wendigo. In turn, these would inspire August Derleth in his own tale, Ithaqua, and would filter down to Pet Sematary!

Drawing on concepts like Settler-Colonialism, Imperialism, Manifest Destiny and historical genocide, Stephen King adds depth to his horrific works by giving them a greater sense of depth. And by playing on an inherent guilt that leads to a fear of injustices of the past coming back to haunt us.

These are potentially only a few of the instances that King has drawn on Native American folklore in his creepy works over the years, did I miss any? Let us know over on Twitter or in the Horror Movie Fiend Club on Facebook!