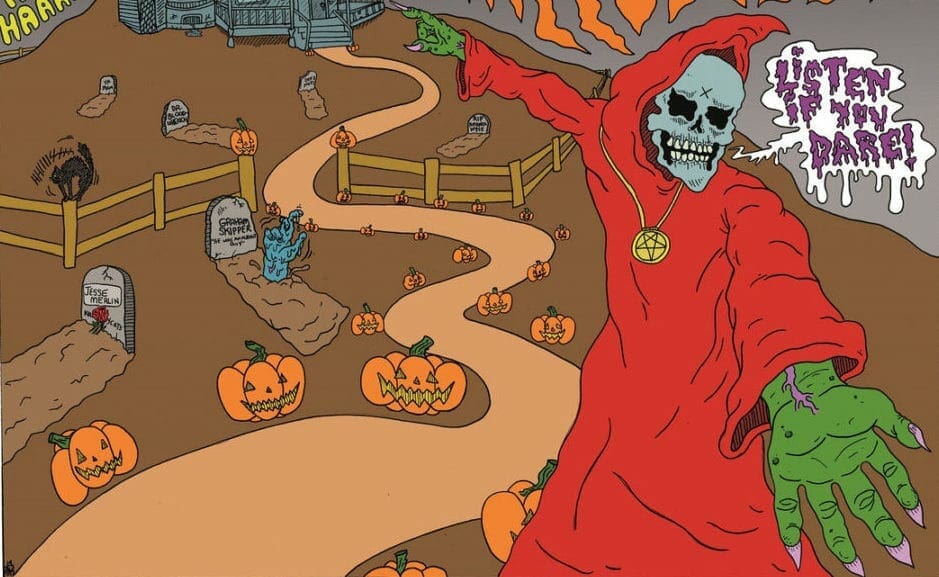 As leaves begin to fall and crisp air fills our lungs, the electricity and anticipation that floats through the ether is a universally felt power for those of us drawn towards the spooky and spectacular holiday of Halloween. It’s inevitable for us fiends who love the macabre and creepy to relish the nostalgia, aesthetics, and atmosphere that’s become embedded in this most sacred of days. And while we have been truly blessed with a gluttonous amount of products to decorate our domiciles with in preparation for killer parties (or just generally existing), there is one crucial vibe inducing element that has not quite kept pace; Halloween music.

Yes, there’s the classic soundtracks to spin or kitschy tunes to throw on, but when it comes to new, original content, the pickings have been rather slim over the years. Luckily for us, actor/writer/producer Sean Keller (Into the Dark: All That We Destroy) saw this void and not only acknowledged the opportunity but did something about it. In late September, Keller released a brand new Halloween mixtape titled The Killer Sounds of Halloween. Now, lest you think this is some new cover album featuring a remixed version of ‘Monster Mash’, The Killer Sounds of Halloween is all original content born out of pure love for the Halloween holiday.

“[…] it’s clear to see the love and thought that Keller poured into this project. Lyrics are never just carelessly thrown together and every song is an Easter egg for horror fans to gush over.”

Much like a real mixtape, Keller’s album spans genres and time periods. He created, wrote and performs 13 original songs under the guise of 13 different bands with a few fun fake ads just for flavor. And it should definitely be noted, Keller did not achieve this feat on his own. Adding yet another level of awesomeness that’s sure to delight true horror lovers, Keller tapped some of his friends to contribute parts on the album. For example, Amanda Wyss (A Nightmare on Elm Street) provides a truly beautiful and haunting reading on the aptly titled, ‘I’m Gonna Have A Nightmare‘. Jesse Merlin (Beyond the Gates) kicks off the album with a fittingly spooky intro, and a few of Keller’s fellow Slashed! castmates, Mary O’Neil and Fayna Sanchez, provide vocals as well.

One of the true highlights on The Killer Sounds of Halloween is a track titled ‘My Halloween Queen‘ featuring vocals by Graham Skipper (Beyond the Gates, VFW). Performed by the fictional band Los Hombres Duendos, the music has a fun rockabilly-esque vibe that would have no problem fitting right in to an Alex Cox film. However, it’s the subject matter of the song that had this spooky gal swooning. Here we have an entire track dedicated to a succubus-like woman who seduces with her dark, witchy ways. ‘My Halloween Queen‘ oozes sexiness and it’s not hard to picture her dark purple lipstick smeared across this guy’s neck as her long, claw-like nails rake across his chest. It’s a love song unlike any other and a much-appreciated addition to the Halloween music genre.

﻿The Killer Sounds of Halloween by Various Artists Another highlight of the album comes from a track titled ‘The Terror at Blood Lake‘ by The Mary O’Neil Group.  Here we see Keller’s true love and passion for the horror genre become crystal clear.  A smart, intelligently written song, ‘Blood Lake‘ pays tribute to so many of the slasher films we know and love while remaining true and unique. Performed in a style reminiscent of Angela Rotella’s ‘Sail Away Tiny Sparrow‘ from Friday the 13th, ‘The Ballad of Harry Warden‘ from My Bloody Valentine or even ‘Angela’s Theme‘ from Sleepaway Camp, ‘Blood Lake‘ calls up all of these while retaining it’s own identity.  O’Neil’s vocals are strong, beautiful and fit the tone of the song in way that balances the brutal, vivid imagery to perfection. This, combined with Keller’s modern tinged, nostalgia heavy lyrics creates a Final Girl ballad unlike any we have yet to see so far. ‘Blood Lake‘ is an instant holiday classic and perhaps more importantly, a beautifully creepy song.

If that’s not enough to get you interested, other top tracks include a Cramps/Messer Chups style ‘I’m The Wolf‘ by Fayna & the Lunarchicks and the haunted house inspired track, ‘The Old Dark Haus‘ in the style of an 80’s dark wave Bauhaus-esque band called These Bloody Hands. And even with just these few handpicked examples, it’s clear to see the love and thought that Keller poured into this project. Lyrics are never just carelessly thrown together and every song is an Easter egg for horror fans to gush over. In fact, there are songs I’m not even going to reference here in an effort to keep the overall article spoiler free! So as you’re piecing together this year’s Halloween playlist, make sure you check out The Killer Sounds of Halloween. It’s 13 complete tracks (with several fun insert bits) of Halloween fun that will scratch that spooky itch that resides deep inside your ears. While Keller has alluded to the possibility of vinyl in the future (fingers crossed), for now you can find the full album available here. While streaming is of course free, Keller has priced the full album at an appropriate $6.66. Support your fellow fiends and keep that creepy cred all at once!

“[…] Halloween fun that will scratch that spooky itch that resides deep inside your ears.”

What are some of your favorite Halloween playlist tracks? Let us know your thoughts on Twitter, Reddit, and over at the Horror Movie Fiend Club on Facebook!