Fundraisers, perfect scores, and proper etiquette are not exactly characteristics of disturbing behavior, but if you combine them with a little systemic mind control they can be deceptive and deadly. Right before the turn of the millennium, Disturbing Behavior was released without the recognition or accolades that popular slasher flicks claimed at the time. Looking back, it seems to be a narrative that deserves a revisit given today’s unsteady social climate.

Sure, it’s fun and entertaining with a unique play on coming of age innocence, sex, and paranoia. However, when we take the ferry back to Cradle Bay and look closer at the Disturbing Behavior’s core reaction to the push of societal norms and conformity, it’s a film that eerily reflects something more threatening than any ghost or hook man, even today.

“[…] a film that eerily reflects something more threatening than any ghost or hook man, even today.”

Written by Scott Rosenberg (Venom), Disturbing Behavior is a delinquent romp against the system when “The new kid in Cradle Bay, Washington stumbles across something sinister about the town’s method of transforming its unruly teens into upstanding citizens.” As the prized, robotic, members of one small town’s community slowly evolve, it is up to average guy Steve and his misfit friends to not only resist the terror of formalism at the hands of Dr. Caldicott, but attack the problem head-on in good, old fashioned 90’s chaos. Don’t let the witty, quipped dialogue fool you because Disturbing Behavior still has a lot to say. The centralized characters of Disturbing Behavior find themselves at the mercy of a tainted high school landscape. Misunderstood and disregarded, our heroes of this hip narrative are the outcasts trying to survive against the force of control. Despite being labeled as the outsider, the trash, and the weirdos, viewers will root for this group of nonconformist teens as they remain the most relevant and grounded subjects. The harsh grounds of an average high school allow for a setting that is both familiar and menacing in its own natural environment. While Disturbing Behavior moves around hot spots of the small town, Cradle Bay High stands as the breeding ground for most of the nefarious activity.

Upon moving to Washington, loner Gavin offers Steve a pre-Mean Girls style intro to the classist structure of the high school student body, ranging from the self-proclaimed freaks to the glorified stars which is not only entertaining, but speaks to the demographic stereotyping adolescents apply to their own kind. As ironic adversaries, the overachieving Blue Ribbon students bring a sinister contrast to the film’s narrative as more desirable human traits become the telltale signs of villainy. Rebellion is the saving grace for the underdogs, ultimately swapping appropriate roles as perceived by society for a new age movement in heroics.

“Misunderstood and disregarded, our heroes of this hip narrative are the outcasts trying to survive against the force of control.”

Without turning aesthetics into overly saturated visuals, Disturbing Behavior cashes in on the grunge punk scene with a darkly subdued palette (distinctive colors found only in those Blue Ribbon letterman jackets). Everything little thing from the alternative apparel to the choice soundtrack hammers on the presence of resistance in the moment and in their lifestyle. Purposeful disconnect through the students’ outer expression, and contrast in uniformity, makes for genuine dress style and attractive scenes. Embracing their individuality, or lack thereof, they literally wear their fight on their sleeve and it is all mixed to the angsty sounds of pre-millennium rock.

From Skold to Janus Stark to Phunk Junkeez (and yes, that sweet little number by The Flys), Disturbing Behavior spins appealing anti-establishment noise in a successful effort to drive home the rocky turmoil felt by the youths of this quaint town and the differentiation they desperately crave. Melding counterculture works into the script from anti-establishment artists like Pink Floyd and Kurt Vonnegut, Disturbing Behavior is a tough rebel yell against the powers that bind. The late 90’s saw an onslaught of teen slasher flicks revived by Wes Craven’s (A Nightmare On Elm Street) meta-horror Scream. Films like Scream’s immediate sequel, I Know What You Did Last Summer, it’s sequel, Urban Legend, and even Halloween H20: 20 Years Later all showcase a major slasher villain which thrust the films into the horror genre spotlight over the course of just a couple of years. Breaking this revival, whether it was intentional or not, Disturbing Behavior turns the menace into something more than a lone, faceless bloodthirsty killer. In fact, there’s hardly any blood in Disturbing Behavior aside from that particular mirror scene which also happens to be one of the film’s slightly gratuitous, slightly tasteful, few instances of nudity.

The villain is found within the community and oddly within the student body itself. Disturbing Behavior takes the ‘who?’ out of the formula and replaces it with an edgy ‘how?’. The new god in town is science and when it is manipulated by the wrong hands, teachers and parents quickly become the enemy. Other members of the community turn a blind eye to the nefarious behaviors either out of ignorance or fear, two very real, applicable traits made to create secondary tiers of wickedness and wrongdoing. The horror of it all is not found in a blade or a mask- it is an invisible presence that is controlled by the majority which happens to be, unfortunately, authority figures.

“Disturbing Behavior takes the ‘who?’ out of the formula and replaces it with an edgy ‘how?’.”

Further breaking the rules itself, Disturbing Behavior takes the girl next door (Katie Holmes) out of the Creek and turns out a pretty decent performance from a young James Marsden. The two lead a small group who are privy to Cradle Bay’s dark motives and seek to end, to the best of their ability, the mind control that keeps the others from being different. Misunderstood by the adults, the “unruly” teens are the epitome of what scares the parents of suburbia. The kids aren’t alright, but that is generally intended regardless of the factions detailing nature and nurture.

Clashing against the institutions that try to transform them into beings of the status quo makes up the bigger picture, but Disturbing Behavior tackles a variety of adolescent issues. From correctional treatments to teen suicide, rebelling against the sci-fi style reform of the teens’ fellow students is just the major genre element that channels the film’s overall purpose. What the film may lack in terms of style and elevated craft is made up for in relatable characters and defiance worthy of support. The in-crowd never looked so scary. At a time when it’s almost an active, common practice to buck the system, the sake of individuality reigns supreme. The circumstances of Disturbing Behavior revolve around both academic and social pressures that manifest as living threats and represent the larger institutions behind them. Revolution is a timeless concept and works as a major construct within the microcosm of Cradle Bay. As Dr. Caldicott’s tainted, but attractive influence grows from the school setting to the homes of the students, the reach of control takes on a terrifying consistency that moves like an infectious disease.

Through modern eyes, it’s a little dated in terms of presence and effects, however, Disturbing Behavior’s teenage wasteland demonstrates a more pertinent message that not only holds up, but holds fast. The narrative circulates violent and humorous entertainment, but also produces an effective range of rage against those who wish to control and change humans against their will. It might be easily written off as another cheesy millennial sci-fi horror flick, but Disturbing Behavior is grounded in significant themes that are probably more relevant now than they ever were in the late 90’s. Not buying it? Step over to my side of the cafeteria…

“[…] Disturbing Behavior is grounded in significant themes that are probably more relevant now than they ever were in the late 90’s.”

The Blue Ribbons indicate winners, the best of the best, but by whose standard? The negation of individuality is a practice that continuously suffocates causes that call for differentiation. The mentality that being the best is defined by academic, social, cultural, political, and even physical attributes is a vicious motivation. Disturbing Behavior champions the refusal of conformity and allows viewers to evaluate both the good and bad in its intentions. At a time when groupthink (one of the most dangerous functions of the human psyche) is in mixed limelight, Nutter’s film challenges the enterprise of defiance and portrays the horrors of all minds becoming one-sided.

Don’t get me wrong, Disturbing Behavior is extremely whitewashed, among some other flaws, but it is a timely uprising against those who look down on and take advantage of others. The savage aggression that the Blue Ribbons take out on anything beyond their control is a deftly applied reaction to show their inner cruelty towards what is different and what is considered wrong (and bad, bad and wrong, wrong, bad). The disconcerting notion that one group is better than others, or should absorb others into adapting certain behaviors, is, well, disturbing. 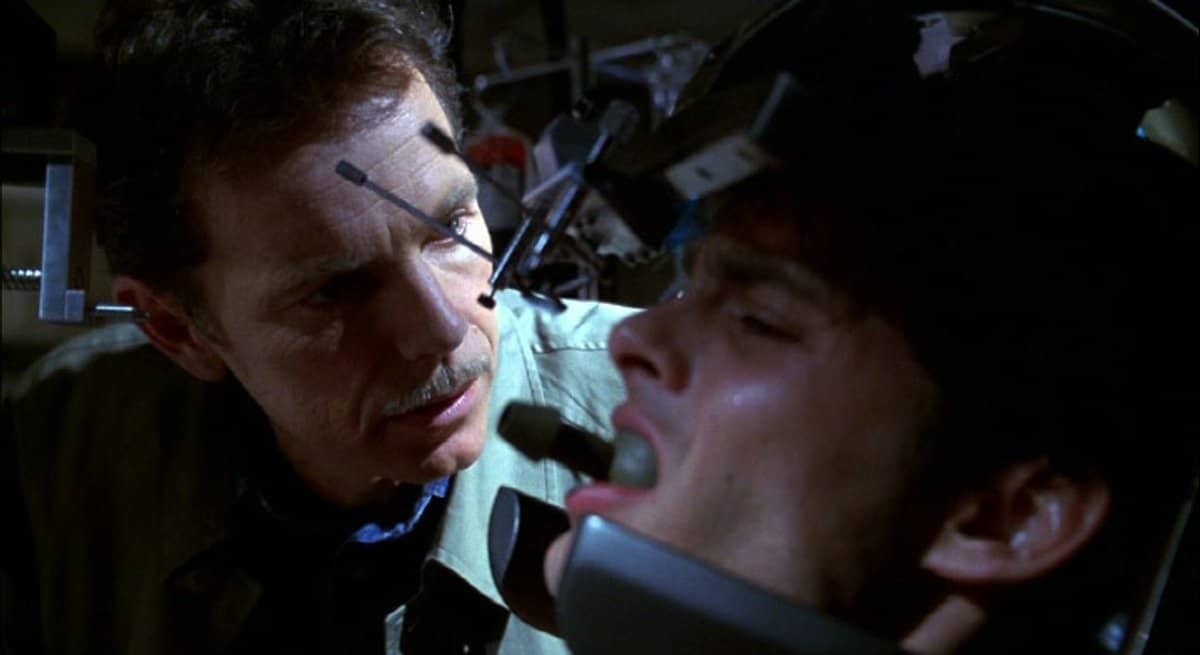 Let Disturbing Behavior be a prime lesson: It’s okay to be different. Wear a chain wallet. Study hard. Listen to your metal heavy. Host a community bake sale. Do what you will, so long as it’s what’s inside of your heart and mind without artificial alteration. This entry into 90’s teen horror may have been an underrated, alternative piece for its time, but it’s just the fix we might all need right now. Blast that guilty pleasure soundtrack and fight for individuality at every cost. Disturbing Behavior is an imperfect film, but it is a brave venture into teen rebellion with a lot of odd charisma. Who wants to be perfect anyways?

Disturbing Behavior is currently streaming on Tubi and Amazon Prime Video as well as Pluto TV. Are you a fan of  David Nutter’s grunge horror Disturbing Behavior? Do you think the film’s themes and message still stand strong today? What’s your favorite line? Let us know your thoughts over on Twitter, Reddit, or in the Horror Movie Fiend Club on Facebook!