Nothing screams animosity and agitation more than being trapped inside four walls with your weird but lovable family members. This time of the year subjects us all to a somewhat false sense of imprisonment, forcing us to push through aggravation in order to make it out of the holidays in one piece. With all that said, the holidays also bring about a special time to celebrate peace and understanding. Written, directed, and edited by Gerard Johnstone (The Jaquie Brown Diaries), New Zealand horror Housebound may have been a sleeper hit back in 2014, but it is the perfect flick to stream before we begrudge the seasonal torment of being held captive by our own relatives.

Following an ATM theft gone wrong, delinquent adult Kylie is sentenced to house arrest under the care of her mother, Miriam, and stepfather, Graeme, in her childhood home. As Kylie struggles to tolerate her typically irksome parents, her mother’s notions of ghosts and hauntings within the home begin to manifest in what she believes to be an intruder. As a prisoner in her own home, Kylie learns more about her relatives than she initially paid mind to and turns indifference into paranoia before discovering the shocking truth behind her house and home. Starring Morgana O’Reilly (Neighbours), Rima Te Wiata (Hunt For The Wilderpeople), Ross Harper (The Devil Dared Me To), Cameron Rhodes (Deathgasm) and Glen-Paul Waru (The Barefoot Bandits), Housebound paints a creepy family portrait pulled together by familial emotion, isolating terror, and enjoyably offbeat humor. 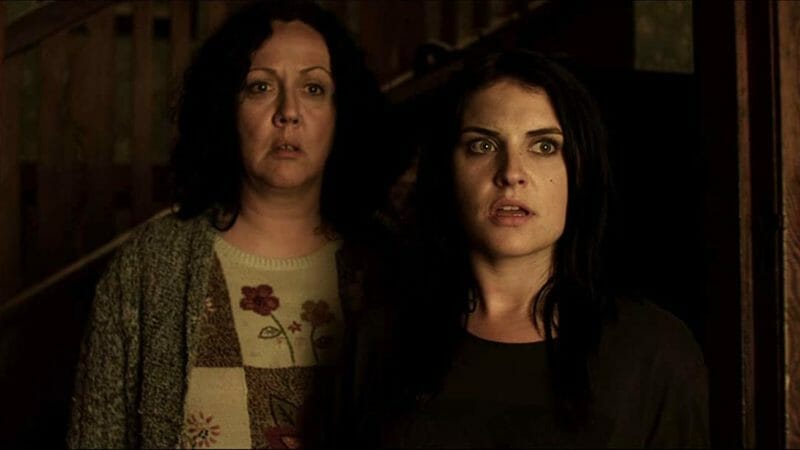 Emotional dynamics almost always hit a complicated snag when family members are forced together, especially in a certain space. Personalities swing and clash as tempers rise or fall towards indifference, all the while creating a scene of palpable tension. Indignation plays a central role in Housebound’s uniquely taut charm as Kylie stands at constant odds with her mother and stepfather. The disconnect between the generations easily plays into the film’s major themes of horror and comedy, but also respects the presence of emotional drama that naturally occurs between realistic characters. Johnstone challenges viewers to put themselves in Kylie’s shoes, whether that calls for resentment or pity.

Housebound’s heroine, Kylie, lies hidden beneath her antagonizing rebellion. Lacking understanding, saturated in selfish manners, and branded by recidivism, she is her own worst enemy while forcing a disconcerted hand toward Miriam and Graeme’s court-appointed hospitality. She’s rough and rigid to her mother’s quirks, which would make her the villain in most cases. However, Kylie can easily be taken off the hook for her behavior few times for one simple reason: we’ve all been there. It’s easy to eye roll our elder’s inability to grasp technology, scoff at their beliefs, and even run as far from them as possible. What Kylie lacks in conviction is brilliantly made up for in relevancy.

“[Gerard] Johnstone challenges viewers to put themselves in Kylie’s shoes, whether that calls for resentment or pity.”

Miriam’s odd but innocent air-headed demeanor and Graeme’s uncomfortable reserve begins to grow on Kylie, as they do on viewers. Most of the film’s engagement lies within Kylie as an individual, but Johnstone creates a massive, albeit taken for granted, amount of humanity within his characters. We feel for the parental figures the same way we feel for Kylie. His ability to appeal to both sides of with empathy makes the narrative that much more engrossing. Housebound is a fun examination of family, building and exploring what happens to your own character when you do go home again, by choice or by law. Channeling inspiration from classic horror like The Changeling and The Legend of Hell House with the comparable edge of modern films like Disturbia and Deathgasm, Housebound steadies itself on a veil of dread and a hint of paranoia. Arrested to her childhood home, Kylie finds herself locked up in a distinct type of prison with two people she seemingly detests. She is quick to judge Miriam’s chilling claims of supernatural activity, closing her mind off to the foolish stories her mother called in on the radio. When she is confined to the house with nothing but time to count, noises to hear, and pieces to put together, Kylie ironically begins to question her own mental wellness.


Isolation plays a special role in Housebound. While many dream of endless lazy days in their sweats eating junk food and watching all the television they can digest, the reality is less than divine (trust me, I was unemployed for four months). Viewers can feel Kylie’s surroundings shrink and her irritation grow just as her mind begins to succumb to the ghost stories her mother tells. While boredom sets in quickly in that kind of environment, it only serves Housebound’s eerie terror and ability to craft some old-fashioned scares.

“Rolling with the mood, Housebound projects a tongue-in-cheek stab at paranormal hunters and skeptics alike.”

Johnstone wrote the character of Kylie with intent. He wanted her character to be “someone that wouldn’t scare easily. That way, when she does finally fall victim to fear, it’s much more palpable.” Originally a skeptic, we can see how her confines blur the line between what’s really going on in the house her family lives in and what their mind is tricking them into believing. Left to her own devices and a slow broadening of her mind, Kylie and the audience both come to terms with Housebound’s twists and realize it’s not a case of some extreme folie a deux. Her parents are not crazy nor are they making her crazy. What happens to them is a little bit crazy. Housebound’s humor is a little undersold with dry wit and sarcasm, but it’s an exceptional addition to Johnstone’s narrative and the build of altruistic emotions. Rolling with the mood, Housebound projects a tongue-in-cheek stab at paranormal hunters and skeptics alike. Rather than allowing the dreaded emotion to take over the entire film, quirky humor and comedic relief balance out the dark tone. In a strange sense, the light comedy gives the film a welcoming sense of fun and mischief turning uninvited guests into new friends.

Keeping an open mind is important this time of year and we often find its most important when it comes to horror recommendations. If Housebound flew under your radar or you did not pay it the thought it deserves, I highly suggest holding up inside on a cold night and catching it (for free) on Tubi or other major streaming platforms. It’s a crafty little story with a lot of care paid to the characters, the comic relief serves its slightly satirical subject matter well, and its dry mood calibrates smoothly with some wild scares. Just keep an open mind and try not to roll your eyes back too hard when you’re stuck spending quality time with your relatives during the holidays… if you can help it.

What are your thoughts on Gerard Johnstone’s Housebound? Were you open-minded to the twist at the end? Let us know your thoughts over on Twitter, Reddit, or in the Horror Movie Fiend Club on Facebook!