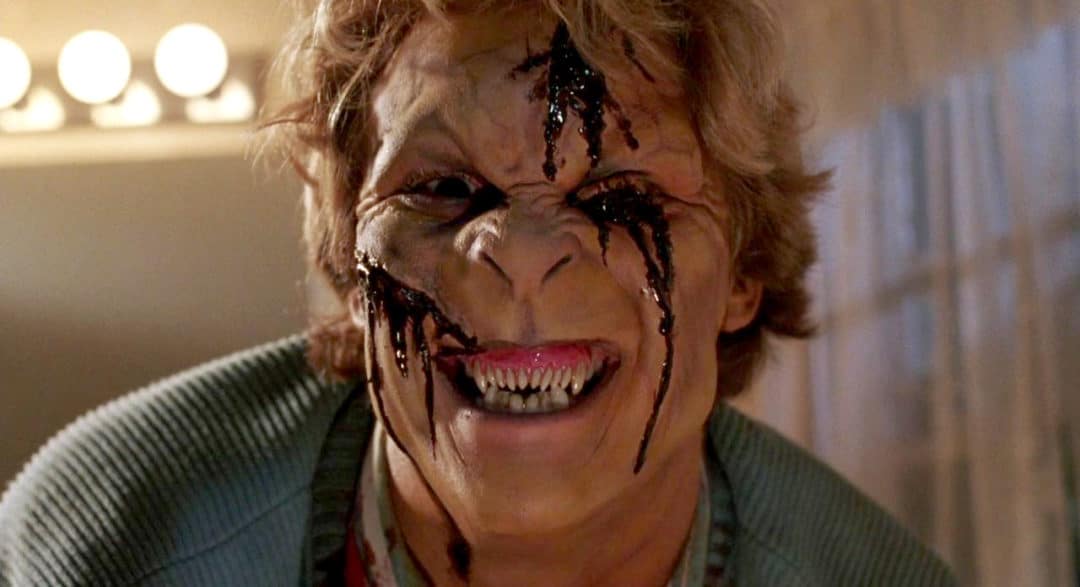 Predictability is one of the more comforting factors of famed author Stephen King’s work. It’s safe to assume his stories will have flawed, nuanced characters, we can expect the story to place humans in the role of the ultimate villain, and we can predict that he will absolutely terrify us. Many of his stories have been adapted for television and film, all expanding the genre beyond the page and the screen. His universe has transformed horror steadily over the decades and has contributed more heroes, monsters, and myths than any author of the modern era. While most of his published works are the basis of adaptation, there is one that remains an original film, the screenplay in which is exclusive from one of his previous books: Sleepwalkers.

Sleepwalkers hit theaters in the sleepy year of 1992. When Candyman, Bram Stoker’s Dracula, and Dead Alive dominated the horror genre and other film releases were mediocre at best. The film “revolves around the last two survivors of a vampiric shape-shifting species that feed on the life force of human female virgins.” Charles and his mother, Mary, are werecats that can transform their human figures at will, have telekinetic powers, and cast spells of illusion. Their singular weakness, ironically, happens to be of the feline nature. Cats and the wounds they can inflict with their claws are fatal to Charles and Mary, who are running out of time to feed on the sweet soul of local virgin victim, Tanya.

While it is one of the more unique products of Stephen King, it is not viewed as one of the best. Lost among legendary adaptations like The Shining, IT, Carrie, Misery, Pet Sematary, The Green Mile, and The Shawshank Redemption, Sleepwalkers could easily die out in the manner of werecats. However, I like to think of this campy little film as a gem among the King-iverse and one that still offers a lot of factors to enjoy. Since cats, mythically, get nine lives, I decided to transform my recommendation for this month and focus on nine reasons Sleepwalkers deserves to be preserved, if not experienced for the first time viewer. Sure, it’s no beautiful, pure virginal soul meant to satisfy our horror hunger, but sometimes a basic bowl of milk will do just fine. The virginal teenager troop started to disappear in the early 90’s, but Sleepwalkers is one of those films that elevated the role underrated levels. Tanya, played by Mädchen Amick (Twin Peaks), is so innocent and saccharine it almost hurts. Amick is, as always, visually appealing in all the right ways and dares you not to form a high school crush on her immediately. The whining prissy gal is not exactly my choice character, but Amick makes Sleepwalkers worth a watch… or two.

8. The New Guy From Ohio

Charles, played by Brian Krause (Charmed), is not too bad to look at himself. He’s an additional piece of eye candy and an interesting, almost sympathetically handsome villain. Krause has that wholesome, strong, all-American boy look that easily ropes you in, but he has the ability to turn sinister with one cocky smile. If you’re looking for the most shallow reason to watch Sleepwalkers, Krause’s big, hunky smile will set you on the right path. However, beware of some severe mommy issues along the way.

With one of the most impressive resumes in the horror film genre as well of the literary world, Stephen King more than likely finds himself at no loss for content. Over 50 of his stories have been adapted for the screen, whether it be television series or feature-length films, but there’s something special about the story of Sleepwalkers. This tale of the last two existing beings of a mythic species facing extinction is not actually based on any Stephen King story at all. The narrative and screenplay are all written by King for the film itself. It’s the first time the author wrote an original screenplay rather than one adapted from his published works. If you go looking for Sleepwalkers by Stephen King in book form, it will just as scarce as the beasts themselves.

Mother and son relationships are often a focal point of horror as they bring out the darkest of psychological taboos and unnatural deviancies. Charles and Mary have a very, very close relationship being the last of their kind, but it’s the sexual component to maintain life that takes Sleepwalkers up a notch on the weirdness scale. Charles feeds his mother in more ways than one, making this a different kind of story than what we’re used to watching. There’s nothing arthouse about it, but it still engages our minds and our eyeballs. If you secretly love a few cringey moments in your horror streaming picks, Sleepwalkers is definitely for you. The early 90’s is not exactly the golden age of special effects in the horror genre, or really film of any type. Sleepwalkers is no exception to many, but if you enjoy cheesy gore, props, and visuals then it might just be the peak of practicality. Roger Borelli and Alterian Studios morph both Krause and Alice Krige (Silent Hill) through all phases of their shapeshifting transitions with some effects that look better than others. Turning a human into a large werecat can’t be easy, but in the name of practical effects I think Sleepwalkers achieves a range of enjoyable visuals. I mean, who doesn’t love Krause’s half-man, half-cat face?

If you’re a fan of the aforementioned special effects, the kills in Sleepwalkers will be of the utmost appeal. They’re extreme and creatively tacky in fantastical, improbable 90’s fashion. Considered to be the film’s demise, the third act takes the kills from gross to bonkers as Mary claws her way past campy to over-the-top. Ranging from corn cob and pencil stabbings to an appendage beating to a fence impalement, Sleepwalkers does not fail viewers by way King’s imaginative death indulgence. There’s a lot of great things about Sleepwalkers, a lot of underestimated things, but one of my favorite parts about it is that no one man or woman is a hero in the end. Cats, led by deputy cat Clovis, are the ultimate avengers and fight off Charles and Mary before they can sustain more life. It’s satisfying when the villain is defeated, but it’s always more satisfying when the animals of a horror film come to the rescue. Rather than using them for petty scenes of terror and death, Sleepwalkers rewards the pets of the story. Clovis and the town cats save the day when all help is lost for Tanya. They may be the villains to Charles and Mary’s species, but they’re heroes to us humans. I can’t think of a better ending.

Rupert Wainwright (2005’s The Fog) was originally hired to direct Sleepwalkers, but Stephen King, in charge of director approval, had someone else in mind. King ultimately approved Critters 2: The Main Course writer, Mick Garris, for the director’s seat because, and get this, he “liked Psycho IV: The Beginning” so much. Sleepwalkers stands as Garris’ first Stephen King project, one of many television and film adaptations he would bring to life on the screen. Since then he has directed six more including BLANK. It’s obviously been an ongoing love affair between the two, a relationship that deserves every ounce of our support.

By far one of my favorite things about Sleepwalkers is not really something that contributes to the plot, the effects, or any of the major elements of the film itself. It’s the handful of horror heavyweight cameos that really makes Sleepwalkers extremely special. Stephen King makes a cameo as the Cemetery Caretaker, John Landis (An American Werewolf in London) as a Lab Technician, Joe Dante (Gremlins) as a Lab Assistant, Clive Barker (Hellraiser) as a Forensic Tech, Tobe Hooper (The Texas Chainsaw Massacre) as a Forensic Tech, and an uncredited Mark Hamill (Star Wars) as Sheriff Jenkins. Those are some pretty cool cats to have in the background of one ‘bad’ 90’s flick, huh?

Are you a fan of Sleepwalkers? What’s your favorite part about Mick Garris’ introduction to Stephen King adaptations? Let us know your thoughts over on Twitter, Reddit, or in the Horror Movie Fiend Club on Facebook!