We all know what goes bump in the night, but what kind of horrors blossom under a sunny sky? The horror genre finds a home in the spaces and corners of darkness, rightly preying on our fears of the unknown and the unseen. When the sun rises and light fills the room, we tend to assume no monster can be summoned nor harm can be done. However, many filmmakers use that predestined notion as an advantage when invoking material meaning to upset and disorient viewers. Daylight can be just as disarming as the night, quite possibly even more antagonistic given its intent. By setting their various horrors under rays of sunshine, filmmakers are able to paint their narratives in chaotic scapes that provoke uncomfortable emotions and proverbial meanings alike.

Walking hand-in-hand with the traditions of the summer solstice, folk horror is the choice subgenre that designates international festivals and rituals celebrating the changing of the seasons, being spring to summer, to more nuanced purposes. From the spirited occult to religious lore, generous harvests to the dangers of nature, and mass gatherings to the isolation of the countryside, folk horror covers a vast array of cultural content, oftentimes using daylight to expose threatening forces in plain sight. As the northern and southern hemispheres tilt towards the Sun and daylight reaches a maximum capacity twice each year, it is only honorable to highlight horror films that utilize the planet’s power to illuminate all it reaches. This list of The 10 Darkest Horror Films With Sunny Atmospheres will make you think twice before seeking safety in the sunlight. Set in the early 1900’s, Peter Weir’s (The Truman Show) ethereal Australian mystery Picnic At Hanging Rock places a very thin veil between extreme visual light and complete tonal darkness. When an all-girls boarding school group decides to visit Hanging Rock for a delightful, sunny afternoon, the mood shifts from delicate secrecy to ominous bewilderment all under the beaming cast of a bright blue sky. Several of the girls and one teacher go missing leaving behind no answers. The gossamer aesthetic combined with the innocent use of light play expressively on the irony of the narrative’s subtly eldritch forebodings. The ultimate ambiguity of this film is just as surprising as Weir’s ability to hide the deepest of secrets beneath a warm glow of natural sunlight.

While there is nothing ritualistic about Steven Spielberg’s (E.T.: The Extra-Terrestrial) nautical adventure, Jaws, there is something to be said about grand American summer traditions and how far society will go to preserve and enjoy them. Thrilling and horrifying scenes can almost be split down the middle between those that occur during sweet sunny days and those that occur in the black of night. The ones that take place during the day, from the shocking to the unsettling, occur in glorious hot sunlight placing a blinding spotlight on the predatory monster lurking the waters of the ocean and the more human problems that exist on land. The disruption of Amity Island’s summertime siesta has become a seasonal tradition in itself and it’s hard not to praise the film’s candid use of daytime pleasantries to bring the horrors of nature to the surface. Michael Reeves (The Sorcerers) pastoral tale follows the great Vincent Price (House On Haunted Hill) as a loosely appointed witch hunter who goes from village to village seeking to condemn and punish women suspected of witchcraft during the English Civil War of the mid-1600’s. Bringing noxious torture and exploitation to the quaint English countryside, Witchfinder General champions a strong depiction of good versus evil as well as light cut by darkness. Its brazen tone speaks to the horrors of crimes committed for the sake of religion as well as to the unspeakable evils that can transpire in the least likely of places at the most unexpected times of the day. The use of graphic imagery (especially for its time) displayed beneath a consistently sunny horizon comments on the film’s layers of meaning that continues to influence folk horror filmmakers, a few found in this list, to this day. 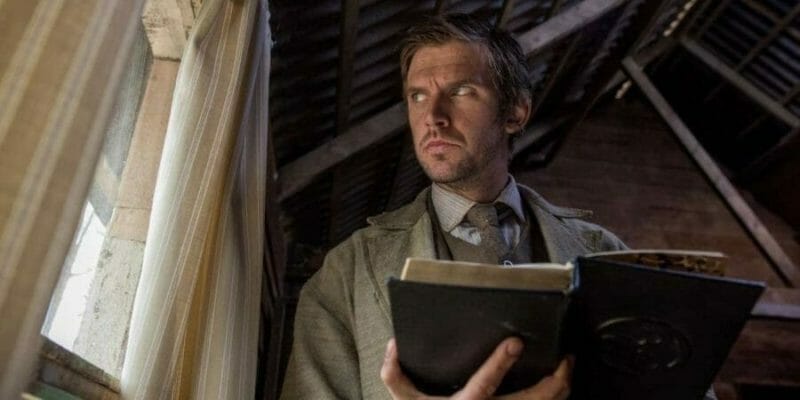 Gareth Evans’ (The Raid) hostile cult story Apostle finds a man, Thomas, searching a remote island for his younger sister, believing she is being held for ransom by religious fanatics that occupy the lands. As he digs deeper into the motives of the inhabitants and their leaders, Thomas encounters natural powers beyond his control. While this film has hearty scares primed in shadows and darkness, a tremendous amount of scenes breathe robust dread in a gloomy, but sunlit ambience. Planted in an earthy palette, the narrative works the land as a major factor in both narrative and application. Overriding trite subject matter with quality effects and an eerily sunny climate, Apostle grows new life from the dried up seeds of righteous cult behavior. All it took was a little bit of sunshine. The only thing more off than horror in the daylight, might be terrifying children in the daylight. Fritz Kiersch’s (Fatal Charm) adaptation of Stephen King’s short story, Children Of The Corn, twists two taboos into one simple film that pits children against their elders. Following a malicious preaching youngster at the helm, the children of Gatlin have ritualistically slain the adults in an effort to please a sinister deity and ensure a productive crop harvest. It’s not often seen as a film horror, but it certainly illuminates certain elements. Aside from the film’s finale, the majority of this creepy kid flick takes place under sunny skies and bountiful farmlands. It’s hard enough to watch children become full-on monsters, but to watch them murder the adults of their rural town in bright, fresh light without guilt or discretion is another level of strange. Satanic activity may typically draw on colors that are more absent in pigment, but Piers Haggard’s (A Summer Story) The Blood On Satan’s Claw turns it out in an ambitiously sunny tenor. A small English village in the 1800’s is burdened by the appearance of a decomposed skull that slowly transforms the locals into beastly components. Demonic possession takes on an intriguing representation as parts of those held by the entity turn into anatomical pieces of its manifestation for all to see under the revealing cape of daylight. Black Masses, suspected witchcraft, and ceremonious violence all take place under blue skies in a rebelliously surreal fashion. Battling skepticism with denial, the film dances around old world beliefs and fears and breaks tradition through the use of natural light. Don’t let Antrum’s deeply dark subject matter fool you as a tremendous amount of the film itself takes place in the isolated, but sunny woods of a supposed Belgium forest. As Oralee and her younger brother Nathan venture to the supposed spot of hell to rescue their family dog by performing a specific set of rituals, the two are plagued by disturbing happenings that all, for the most part, take place in an audacious amount of daylight. Debut directors David Amito and Michael Laicini shroud their cursed film in curious mystery and douse the content in deafening light, never shying away from showing  the horrors that occur on the siblings’ journey. The authenticity of the film is practically palpable and the offsetting landscape complete with sun, trees, and sky only piles an odd reality onto the film’s perturbing uncanny features. 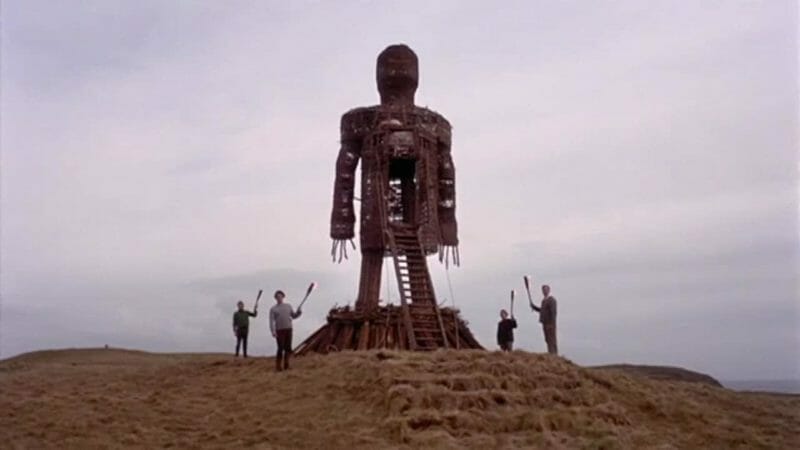 If there is one familiar film that embodies the intrinsic spirit of folk horror and the unusual sunny settings of deadly sacrifice among genre fans in the masses, it’s Robin Hardy’s (The Fantasist) The Wicker Man. Indulging in folk elements dedicated to ritualistic summer harvesting and spiteful gods, the sunny skies forecast a contrasting doom when a Christian police officer travels to the isolated Summeraisle to find a missing girl. The dreadful tone is masked in glorious daytime atmospheres and even its iconic end goes so far as to place a horrifying sacrifice scene in the middle of the day just before the sun sets. An exception for entertainment can be made for Neil LaBute’s (Death At A Funeral) 2006 remake starring Nicolas Cage (Mandy), as it maintains the original aura of anxious daylight and commendable costume design. However, LaBute’s film has gained traction with more of a cult following due to Cage’s outrageous performance over many other necessary qualities. When we think of witches, we often conjure up images of women cloaked in black robes, capes, and pointed hats tending to their cauldrons and riding their broomsticks all under the dark night sky. Director Anna Biller’s (Viva) unique film, The Love Witch, brings vibrant color and sunshine to the forefront of witchy imagery. Elaine is a young, beautiful jaded witch who turns to ritualistic optimism in finding a lover and keeping him alive. From a lovely Renaissance Fair to the backyard burial of one of Elaine’s lovers, this film relishes in a sunny disposition which utilizes daytime ambience to accentuate Elaine’s femininity and hopeful attitude. Casting a spell on expectations, The Love Witch, is a stylistic genre piece cast in gorgeous daytime settings. While the core of her matters is dark, the film’s concentration on a more conventional ambience wraps the narrative in lighthearted brilliance.

You knew this one would reign in the limelight. Ari Aster’s (Hereditary) Sweden-set horror not only plays with terror in the daylight, the entire film is clothed in bursting rays of sunshine with night nowhere in sight. Saturated in bright, bold florals and illustrations, stark white linen, and a palette that hits every color on the wheel, Midsommar embraces the beauty of a very natural atmosphere. Following the film’s initial cold intensity, the view is drastically transformed into an endless reel drenched in sunny pagan agency. The aesthetic refuses to break, even when chilling moments of horror and stunning instances of gore take over. Aster manages to cast some of the most gruesome and thrilling elements of cinema out into the daylight with ease and magically enhances the terror while he’s at it. The whole experience is a trip for both the mind and the senses, creating intentional confusion viewers can’t help but stare at in awe.

What is your favorite horror film with a sunny atmosphere? Which one of these films screams summer solstice the brightest? Let us know your thoughts over on Twitter, Reddit, or in the Horror Movie Fiend Club on Facebook!