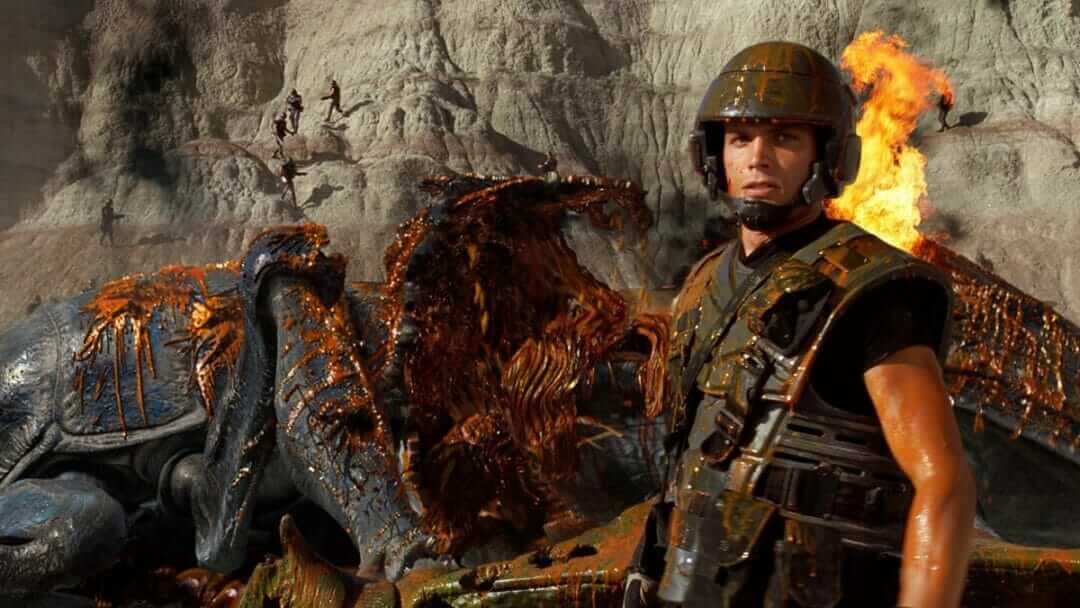 Teens-In-Peril continues to be one of the most popular horror subgenres, and adolescent mayhem is not limited to masked killers knocking off stereotypical characters one by one. Let’s face it, teenage life can be scary. With fears ranging from school exams, to dating, to the question of what to do after graduation, filmmakers use countless tropes to transfer those nightmares to the screen. From old-school classics to modern, meta takes, teen horror spans the spectrum, focusing not only on movies aimed at a younger audience, but also those dark dramas that feature teen characters. This go round, for “No One Can Hear You Scream” month, I’m taking a look at the 1997 sci-fi/horror/teen drama hybrid Starship Troopers.

Starship Troopers follows recent high school graduate Johnny Rico (Casper Van Dien) as he enlists in a Mobile Infantry and is eventually sent on an interplanetary mission to fight a species of insect-like alien creatures called Arachnids. On paper, the film sounds like it will be a big-budget, sci-fi shoot-em-up extravaganza. And, don’t get me wrong, it is all of that, but it’s also a lot more. Instead of focusing the majority of its screen time solely on the alien action, which there is plenty, Starship Troopers pulls off an entertaining coming of age teen drama, or, dare I say it… a love story.

The first act of Starship Troopers lets viewers in on the everyday life of Johnny Rico, and his group of high school friends. Here, Johnny is faced with typical teen movie stuff: a love triangle between two beautiful girls, competition from a jock on an opposing sports team, and the big decision of what he wants to do after graduation. His dad insists he’s going to Harvard, by Johnny just wants to spend a couple of years, you know, “seeing the galaxy”.

Starship Troopers is set in the future when space travel appears to be relatively commonplace. The film makes the most of the futuristic setting by weaving various sci-fi elements into teenage life even if some of the technological touches already seem outdated by today’s standards. One scene in particular finds the characters dissecting Arachnid specimens during biology class. The scene, arguably one of the most important of the first act, and serves a few big purposes. It is the first time we see several members of the main cast interacting with the creatures while displaying their camaraderie to one another and it gives viewers an idea of the over-the-top, gooey ride they are in for.

Johnny‘s path after high school is ultimately swayed by girlfriend Carmen (Denise Richards), who plans on attending a fleet Academy in order to become a pilot. After graduation, Johnny and Carmen part ways, and Dizzy and Zander follow each of them, respectively. With the main couple separated and each of them with a new potential love interest, the stage is set for an intergalactic relationship saga. Carmen is a major force in Johnny‘s character arc. She is the one who leads him to join the Mobile Infantry, the pilot who literally drops him into the war zone, and the one Johnny calls on for help near the story’s end.

Aside from a few inter-cut sequences of “news footage” that have been laced with dark humor, the first half of Starship Troopers is largely devoid of any alien terror. However, the midpoint of the film changes everything as Johnny and the rest of the Mobile Infantry begin their fight against the Arachnids. Blood, gore, neon green alien slime, and countless bodily dismemberments are shown to gleeful excess. In addition to the mantis-like army, several other creatures are featured, including enormous beetle-like monstrosities. The majority of the Acrachnids display sharp, jagged angles which is a nice contrast to the smooth, sleek, and clean set design. The creature effects are also where most of the film’s horror elements come into play. While the film never feels particularly scary or tense, the copious amounts of blood and gore should satisfy even the seasoned gorehounds.

“Verhoeven is not one to shy away from violence, gore, or nudity, and Starship Troopers is no exception.”

The characters and the situations are rather cartoonish, but it all fits nicely with the ridiculous tone the movie establishes. Hats off to the entire cast who appear to be game for the material. Verhoeven’s visionary style compliments the campy and oftentimes farcical project to a T. Prior to Starship Troopers, Verhoeven was best known for directing an assortment of sci-fi and erotically charged thrillers including RoboCop (1987), Total Recall (1990), and Basic Instinct (1992). As evidenced by each of those movies, Verhoeven is not one to shy away from violence, gore, or nudity, and Starship Troopers is no exception.

Starship Troopers hit theaters on November 7, 1997 earning $121.2 million at the box office against a budget of $105 million, and is currently available on various streaming platforms. Are you a fan of Starship Troopers? Share your love of the movie, or your misplaced hatred for The Arachnids on Twitter, in the official NOFS Subreddit, and in the Horror Movie Fiend Club on Facebook!