The 10 Best H.P. Lovecraft Gods & Monsters on Film That Will Drive You Absolutely Mad

Even to those unfamiliar with his dark fantasy and cosmic horror, the content of H.P. Lovecraft’s short stories and novellas are nonetheless inescapable. The lingering effect of madness spawned from the wealth of his incredible horrors can be found writhing in the darkest corners within the works of others. While mention of his name often comes with a warranted caveat, the intensity and scope of his writing remains a testament to the range of horror. It’s a bizarre inventiveness that has enticed so many filmmakers to adapt Lovecraft’s stories to film, only to realize that letting his esoteric mythos become an influence is often an easier task.

To celebrate the imagination of a strange, reclusive man who died in 1937, here’s a list of the best gods and monsters from his stories ever committed to film. But tread cautiously, dear reader, as diving too deep into Lovecraftian lore could very well leave your mind shattered beyond reparation. Based on Lovecrafts The Lurking Fear

The family is close, and grotesquely mutated after an act of twincest years ago set their bloodline down a ghastly path. Deformed over the years into inbred, bloodthirsty monsters, the Van Dam family became fully hermaphroditic, able to reproduce all on their own. They could be self-sufficient nasty things, if not for the need to consume human flesh to survive. Retreating down into the unexplored caverns on a fishing island in the Canadian Maritimes, the Van Dam family endures by attacking the surface-dwellers through openings in underground tunnels, and sometimes even scavenging the rotting flesh from buried corpses by smashing into coffins from below.

Based on Lovecraft’s The Rats in the Walls

Inheriting an old hotel and receiving a copy of the Necronomicon from a mysterious local fisherman, widower Edward De LaPoer (Bruce Payne, Howling IV: The Freaks) discovers a way to bring his beloved Clara (Maria Ford, Slumber Party Massacre III) back from the dead. In true horror fashion, “Clara” returns under the darkness of night, but something is amiss. Red Flag: She can barely contain the mass of swirling tentacles in her mouth. Distraught and realizing his mistake, Edward cuts the shell of his dead wife with a sword, sending her beneath the floor of the hotel where the buried horrors of his family’s mistakes reside. When “Clara” returns through the floor, she reveals her true monstrous identity, that of a cycloptic tentacled beast with a gaping maw, larger and more disturbing than the human mind can fathom. Based on Lovecraft’s The Case of Charles Dexter Ward

Under the guise of conducting sensitive chemical tests on the cadavers of animals, renowned chemical engineer Charles Dexter Ward (Chris Sarandon, Fright Night) abandons his wife and retreats to a farmhouse to work in isolation. Soon, he’s talking with an archaic inflection and obsessing over an old portrait of a man named Joseph Curwen, to whom he shares a remarkable resemblance. Becoming a weird recluse, Charles is eventually committed to a psychiatric institution by his wife, whereupon a doctor’s assessment, it’s revealed that his metabolism has increased twofold, leaving him with intense cravings for flesh and blood. It seems that 17th century necromantic experiments through an ancient family bloodline could be involved. Of course, they were. 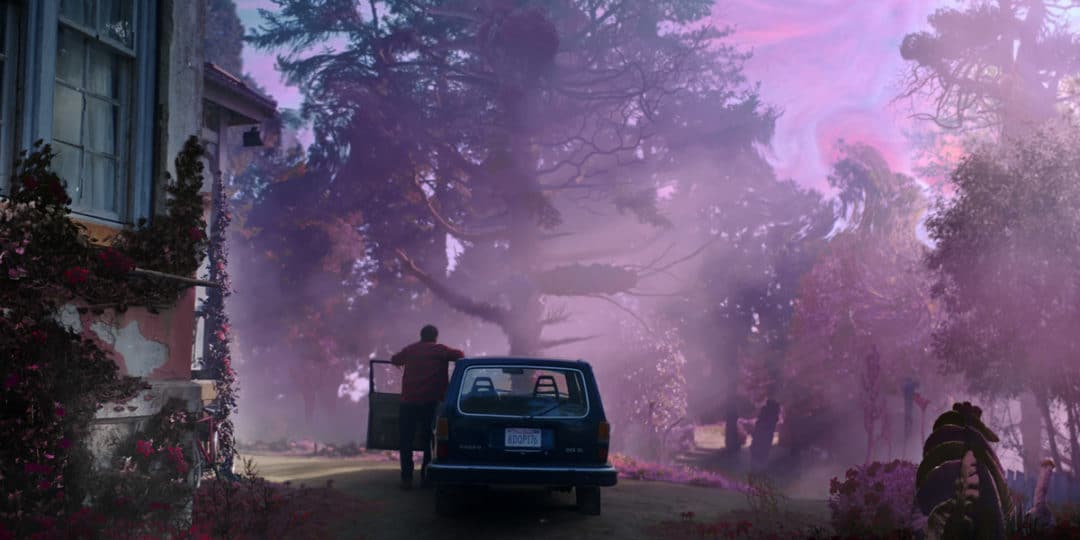 Based on Lovecraft’s Colour Out of Space

A meteorite from beyond our solar system crashes into a family farm on the outskirts of Arkham, Massachusetts, emitting an undefinable color and a high-pitched frequency, before it dissolves into the ground and infects the local water supply. Strange occurrences then begin happening around the farm, with vegetation rapidly mutating and the free-roaming alpacas merging into a Cronenbergian glob of some kind of undulating, light spewing monstrosity. As the family devolves into unhinged madness, suffering time distortions and violent outbursts towards each other, the often nauseating yet hard-to-define effect of the alien presence spreads outwards, corrupting everything around them. It’s not necessarily a sentient horror attacking the family, but something so far beyond their understanding of it. An odd hue of purple has never felt so disturbing.

Based on Lovecraft’s Dagon and The Shadow Over Innsmouth

Desperation turned the villagers of a small fishing village along a remote section of the shoreline of Spain away from Catholicism and to the worship of Dagon, the great sea deity. Plentiful bounties from the sea then enriched the village, which seemed a fair trade for a little blood sacrifice here and there and the offering of fertile women to breed a population of human/fish hybrids. Letting the village fall into water-logged shambles, the villagers took to flaying human sacrifices in the name of their god, losing every semblance of humanity as they became hybrid versions the Deep Ones—their skin turning to scales, their lidless eyes bulging, and their necks forming gills—before eventually retreating down into the depths of the sea in eternal worship. For a film that features an amorous mermaid princess looking to mate, and hints at the unimaginable Dagon himself, it’s unsettling that it’s the hybrid cult of villagers and their loss of humanity who are the truly scary monsters. Based on Lovecraft’s The Outsider

Giorgio Orsino, better known as The Freak (Johnathon Fuller, The Pit and the Pendulum) is the deformed and mentally deranged man-child confined to a horrible existence of imprisonment in the dungeons of an Italian castle, where he is tortured by his mother out of revenge for his father leaving them both. As is happens, years of abuse have turned the Freak violent, in that innocent Frankenstein’s Monster sort of way. When his mother dies, and ownership of the castle falls into the hands of a distant American relative with a modern family, the Freak discovers a world full of people he never knew existed. He tears off his own thumb to free himself from his shackles and haunts the new family from the shadows until his curiosity and longing for human connection has him venturing out into the nearby town. The Freak might be sympathetic, but when he’s discovered mimicking affection on a woman in the bloodiest of ways, it’s hard not to scream in shock and yell, “Monster!” Based on Lovecraft’s From Beyond

Dr. Edward Pretorius (Ted Sorel, Basket Case 2) and his lab assistant, Dr. Crawford Tillinghast (Jeffrey Combs, The Frighteners) are working on an experiment to stimulate the human brain’s pineal gland by altering frequencies in a room with the Resonator, allowing sight into an overlapping dimension. The results are disturbing, unveiling the sight of swirling creatures in the other dimension. In an instant, a creature attacks, and Dr. Pretorius is left headless—good thing it’s just his corporeal body that takes the damage, setting him free to become a dimension-hopping villain, corrupted by the wealth of knowledge that his awakened mind has suddenly taken in. And then there’s Dr. Tillinghast, now a suspect in the supposed murder of his mentor, sprouting an unruly and engorged pineal gland bursting through his skull to flange around with a demented mind of its own. The mad doctors might be opposed to one another on the monster spectrum, but combined they leave a mess of blood and body horror and kinky sex, more than enough to drive all spectators mad. Based on Lovecraft’s Herbert West-Reanimator

Arrogant and brilliant in equal measure, Herbert West (Jeffrey Combs again), is a medical student who can’t let the dead stay dormant—no matter if it’s an intact body donated to science, a severed limb, or a house cat. Outdoing Victor Frankenstein’s maniacal need to create life from death, West develops a serum to reanimate the dead, inadvertently painting the halls of Miskatonic University Medical School red with blood. His obsession only allows him to see the god-like advances that will come with stabilizing the reanimation process, leaving him blind to the greedy machinations of Dr. Carl Hill (David Gale, Savage Weekend) the school’s administrator, out to steal the serum. The most explicit monster in this film belongs to Hill, who is decapitated, yet still able to please a woman, but without West and his obsession, the dead wouldn’t be that much of an issue and the horror would be nonexistent. Based on Lovecraft’s Cthulu

The biggest and baddest of the Great Old Ones in Lovecraft’s cosmic mythos, and without a doubt the hardest one to effectively put on film. Cthulhu’s visage is well-known: part octopus and winged dragon, with a unsettling caricature of an anthropomorphic body: two arms, two legs, and when standing, hundreds of feet tall. Though residing in a deathly slumber in the underwater city of R’lyeh, his mere presence on Earth is enough to drive people insane. And so human cults (as well as nonhuman—see the Deep Ones) have formed in worship, with the dead Cthulhu molding their dreams and spreading his eternal madness through nightmares. As the cultists like to say, “In his house at R’lyeh, dead Cthulhu waits dreaming.” Based on Lovecraft’s The Case of Charles Dexter Ward.

An Outer God, Yog-Sothoth exists beyond of our universe, yet he is omniscient—he knows the gate, he is the gate, the key and guardian of the gate. His name is mostly uttered in the whispers of cultists looking to please him, but even then, caution is always embraced, as seeing or knowing too much of Yog-Sothoth risks… you guessed it, madness. But even still, Yog-Sothoth isn’t evil, but indifferent to the plights and curiosities of man. Often depicted in writing and quiet conversations by his cultists as a conglomeration of iridescent spheres and fluttering tendrils, Yog-Sothoth’s esoteric presence (re: impossible to film) has somehow made appearances in more films than any other Lovecraft creation.

While Lovecraft’s brand of horror is often hard to define, and even harder to adapt to film, his influence can be felt even when it can’t be pinpointed. Madness is the key, so rant and rave about your favorite Lovecraft gods and monsters adaptations with the Nightmare on Film Street Community on Twitter, Reddit, or The Horror Movie Fiend Club on Facebook!