The Maiden, The Mother, and The Clone: Examining The Evolution of Interstellar Badass Ellen Ripley

What separates Alien‘s Lt. Ellen Ripley, as portrayed by Sigourney Weaver, from all other heroines in horror movies? What makes her stand out from the Laurie Strode’s, the Nancy Thompson’s and the Sydney Prescott’s? She’s strong, yes. She stands up for what she believes in, sure. But these are all characteristics from a plethora of strong-willed, female leads. There’s something else bubbling under the surface that has resonated with audience members from Alien to Alien: Resurrection and today’s action heroines owe a debt to characters like Ellen Ripley, who managed to become a symbolic badass long before female action stars were common.

Originally written for a male actor, the role of Ripley was altered by the request of 20th Century Fox president Alan Ladd Jr, who believed that audiences would care more for a woman in peril, creating more tension for the viewer. This creative decision ultimately birthed one of the most iconic female leads in cinematic history. If by coincidence or happenstance of the time, Ripley became a symbol of fighting for the rights of woman in a patriarchal system.

“The legacy of Ellen Ripley goes beyond the franchise of Alien films. Her memory is imprinted in every new action/horror film with a lead heroine.”

Although Alien is set far into the future and far from Earth, the film feels tangibly realistic and relatable which makes the ensuing horror even more distressing. Here we have a towing vehicle, on its way back home, just like a big-rig 18-wheeler transporting ore and minerals to the next docking station. We’re presented with grumbling blue-collared technicians, engineers, and navigators – a diverse mix of English and American complete with hierarchical and contractual disputes. One could argue that Ripley embodies the plight of all working women, crossing the boundaries of male-dominated workplaces, sometimes even stepping over it with her astute attention to detail and code of conduct.

Ripley isn’t particularly focused on early in the film but she lets her concern of a distress beacon known to science officer Ash (Ian Holm). That concern displays a fastidious yet cautious attribute but it’s only until she goes down to the lower deck to check up on Brett (Harry Dean Stanton) and Parker (Yaphet Kotto) repairing the damaged ship that this subtext of Ripley having to always asset her authority comes into play. The two technicians are defensive that she’s scrutinizing their work, pretending not to be able to hear her and using the steam valves as noise. Ripley gives as good as she gets, however, and tells them where to go when she realizes she won’t be able to get a proper answer from them. But her coolness under pressure soon rallies the men around her as crewmates get picked off one by one and imperceptibly the maiden from the beginning of the film turns to survivor. In Aliens, we’re reintroduced to a traumatized Ripley. Escaping the xenomorph beast has scarred her emotionally, leaving her a shadow of her former self. After drifting aimlessly in hypersleep for 57 years, Ripley is picked up by a deep space salvage team and after a terrible nightmare where she believes a chest-burster is clawing its way out of her abdomen, she hugs Jonesy, the only other survivor of the Nostromo, like a child would cling to a comforting teddy. Ripley endures as a hero, not because of her ability to wield an M41-A pulse rifle and flamethrower duct-taped together, but because she is remarkably human in the way she confronts and overcomes her doubts and fears. Communication goes down at the colony established on LV4-26 and she’s sent in with the marines to find out what’s happened. The group comes across a child named Newt (Carrie Henn) who has so far survived the infestation on the colony and Ripley becomes a maternal figure for the child. The bond between them grows throughout the movie, in a humbling realistic way for a sci-fi horror.

Skip forward 90 minutes, and there’s a visible difference in emotion as Ripley braces herself descending an elevator shaft to tackle the alien horde alone. From a traumatized victim at the beginning of the film to a full-fledged warrior queen by the end, it’s inspiring to watch an undeniably historical performance from an actress breaking the “Hollywood Hero” mold. Ripley confronts her ultimate fear when she rescues Newt and attempts to escape, only to discover the aliens have a queen of their own. It’s a stand-off for the times: mother against mother, the Queen surrounded by egg offspring and Ripley with her surrogate daughter clutched around her neck. Rage and fury overtake Ripley as she backs away, only to see an egg open. With a wry nod of her head, Ripley unleashes the fury and flames (quite literally) she’s been suppressing all this time. 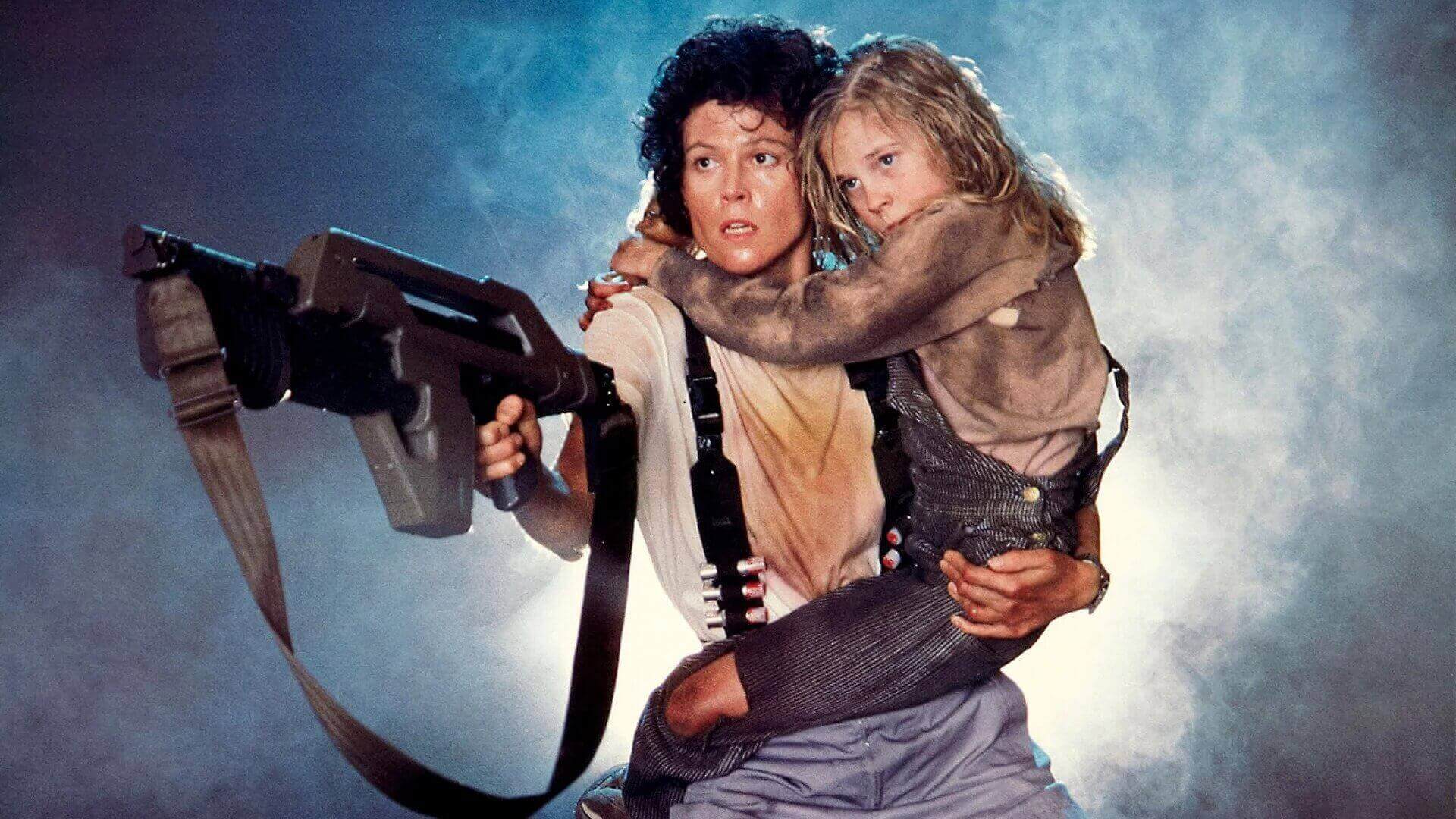 While she has displayed heroic and selfless characteristics in the previous installments of the franchise, it is with Alien 3 (1992) where Ripley truly becomes the strong female protagonist we recognise today. Alien 3 is an exploration of human power dynamics in a confined setting and the limits of institutional control. It is here that her gender factors into her survival.

Whilst Alien was a haunted house in space, Aliens an action-packed war analogy, Alien 3 aspired to return the franchise to its horror roots – a single antagonist slasher film with religious undertones. Darker and edgier than its previous outings, Newt and Hicks (Michael Biehn) are unceremoniously killed off during the opening of the film when their escape pod crashes into a prison colony planet. Barely surviving the crash herself, Ripley is saved from the refuge and taken to the prison colony where a message is sent to Weyland-Yutani to pick her up. Unknown to all, a face-hugger has also survived the crash and soon finds a host… Ripley discards many of her feminine features to survive in the male populated prison. She shaves her head, wears a prison uniform, and generally tries to keep her distance from the inmates. She has a suspicion that the crash may have been triggered by an alien, and once again displaying her calm logic, follows the breadcrumbs to ascertain this information. She is battle-hardened from the loss of Newt and Hicks, and her life has been consumed by this entity that seemingly follows her at each turn. In this respect, Ripley becomes the general of the male-populated prison colony. Sacrifice is one of the main story arcs of this film, as Ripley ultimately learns she is carrying an alien queen inside her, having been laid by a face-hugger during her hypersleep on the Sulaco. Knowing that the company will use the Queen to breed more xenomorphs and potentially end the human race, Ripley sacrifices her life by throwing herself into a smelting turbine.

While Alien: Resurrection is typically looked down upon as one of the weaker entries in the franchise, another argument could suggest that here we see the strongest embodiment of a hybrid Ellen Ripley. She has evolved into a weary warrior; A tragic hero that has a responsibility not just to those who have perished before, but for the whole human species. For the fourth time, she uses her surroundings to survive the biomechanical beast, and finds her own identity in the wake of the continued abuse she has endured throughout the series. Ultimately, she takes back control of her own fate, and in the final shots of the film Ellen Ripley, returns back to Earth, a planet alien to her. There is a reason Warrant Officer Lt. Ellen Ripley is one of the greatest heroines in all of movie history and ranks high on all top ten lists. For the last 40 years, her compassion, intelligence and strength have inspired people from different cultures and vocations. We see ourselves in Ripley, in her vulnerability, her perseverance, and her unflinching courage in the face of overwhelming odds. The legacy of Ellen Ripley goes beyond the franchise of Alien films. Her memory is imprinted in every new action/horror film with a lead heroine. Simply put, she is an icon. One that will continue to inspire generations to come.

For more Women in Horror all February-long, follow us on Twitter, Reddit, or in the Horror Movie Fiend Club on Facebook! And for all the best horror discussion you can find online, stay tuned to Nightmare on Film Street.