The Shape: Why Michael Myers Continues to Haunts Us

Being an 8os baby comes with the distinct privilege of being exposed to horror movie culture at a time when everything still felt new and fresh.  Although I would watch characters like Freddy and Jason through the space of my fingers, I always recognized that they existed because of special effects and movie magic. Whereas, the one horror villain that petrified me the most was always Michael Myers. He, was real and could exist.

In growing up on a quiet small town street, John Carpenter’s Halloween (1978) and Michael Myers spoke directly to my childhood fears of the unknown and what could be lurking quietly in the night. As I would ride my bike home at night from a friend’s house or play at the park a bit past curfew, the journey home was full of tension. Could someone be watching? With such fond adolescent memories in mind and with Michael returning to theaters this Halloween, I thought it would be relevant to explore his legacy and why he continues to scare audiences forty-years since his original killing spree. 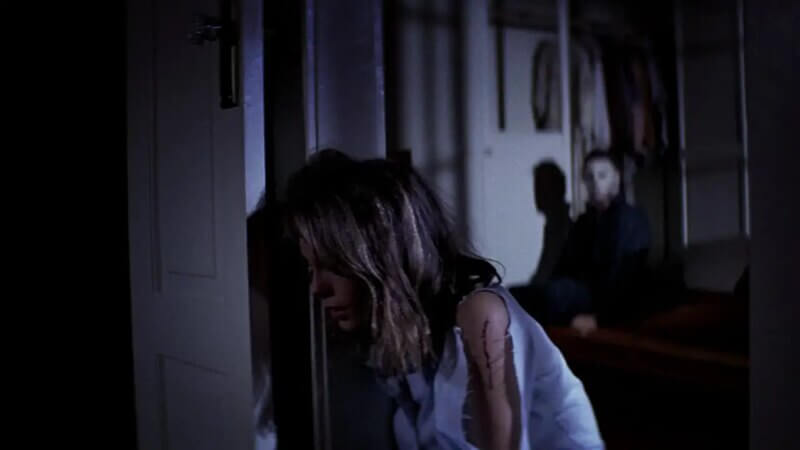 To understand Michael Myers is to appreciate the origins of American horror cinema and its connection to German Expressionism. Born out of Post World War 1 Germany, German Expressionism films reflect the great social unrest and economic unease of that time. With crime on the rise in major cities, there was a fear that society was on the brink of self-destruction.  As such, early German directors and pioneers of the German Expressionism including F. W. Murnau (Nosferatu) and Fritz Lang (Metropolis), shared their social and political voices by creating films that speak directly to the duality of humanity and the chaos of their lived experience.  Hence, their stories and monsters, spoke to real world conflict between good and evil and were born from social, political and cultural realities.

Like the vampire Count Orlok in Nosferatu (1922) or the 1960s radioactive born zombies of George A. Romero’s Night of the Living Dead (1968) (who embody the tensions of the American Civil Rights Movement and the silent majority of the Vietnam War), the character of Michael Myers is haunting for a reason. Michael rises and is born from the falsehoods of the American Dream and the ideals of American middle class suburbia.

Specifically, as a product of American (or North American) suburbia, Michael comes from a place that projects particular values about family, which John Carpenter immediately taints. It’s in Hitchcockian fashion that Carpenter places the audience in the gaze of the killer at the beginning of Halloween (1978), and as a result, asserts that anyone could be the stalker lurking around a house at night. Furthermore, both violence and sex fragment the comfort of the everyday home sold as the crowning achievement of the American middle class dream. John Carpenter’s personification of fear and terror strips small town America of its tranquility and speaks to a shared sense of anxiety about the places we call home.

Moreover, as Michael is entrenched within in the horror imagination, its important to remember that the evil framed on-screen forces us to face (as Laurie does with Michael) the evil of our everyday. Consequentially, this should be at the heart of the horror conversation. Beyond fandom, there is a rich conversation to be had about famous on-screen killers like Michael and what they really represent. What real evil are we staring in the face? Even in my everyday work as a high school media and communications technology teacher, I’ve had to remind stakeholders of Michael’s urgency. In the coming days I will be taking a large group of high school students to a screening of  Halloween (2018) followed by a Skype conversation with horror expert Dr. Brandon Bosch from the University of Nebraska. As students gleefully return permission forms, there are parents concerned with the “demonic” nature of the film. Although these parents are justified in their concern, their understanding of a character such as Michael may lack a particular cultural focus or depth. Certainly, they are anxious about the gore, blood, and Michael as a relentless slasher. Rightfully, he is an intense on-screen presence and the tropes of the genre can create a tense viewing experience.

Even more, the concern about all things “demonic” shouldn’t be about an on-screen character like Michael. It should be about the world he represents and lives in. Above all, Michael isn’t demonic – we are.  Michael speaks to all of us on a human level. As such, horror films and characters like Michael are therapy for the soul. They force us to recognize the good and evil in our world. Perhaps, this recognition is what scares us the most.

Finally, if you begin your day with CNN or by reading a morning paper, you most likely are faced with some form of evil incarnated.  From the local to the global, humanity is haunted by the promise of “pure evil” existing and acting. As such, Michael remains relevant. Even more, with his white ominous mask, we’re able to project on our fears and perhaps evil thoughts onto him. Ultimately, it’s the realization that Michael Myers could be your son, brother, friend, cousin or neighbour that is most haunting. He could be any one of us.

For a deeper read into the film and its place in film scholarly history as the first “Slasher Film,” read Murray Leeders “Devil’s Advocates: Halloween” from Columbia University Press. Leeder’s writing is a true tribute and thorough study of Carpenter’s classic.