Tina Romero Developing QUEENS OF THE DEAD as an Homage to her Father, George A. Romero

Tina Romero, the daughter of George A. Romero, is set to carry on her late father’s legacy by writing and directing the latest installment of the Dead series he created with The Night of the Living Dead back in 1968.

Whilst it was recently been revealed the Tina Romero would be teaming up with the legendary Tom Savini for a horror webseries, she has since confirmed that she is soon to make her feature film directing debut with a zombie flick titled Queens of the Dead. Speaking to The Saunders Blog, she said:

Queens of the Dead is a fusion of two huge parts of my world: zombies and Gay nightlife. It’s a tribute to my father as well as my entrée into the genre he grandfathered. I can’t say too much yet, but what I can tell you is that this film will have all the hallmarks of a George A. Romero classic: farce, politics, heroes, assholes, and most importantly, herds of silly and slow moving walkers that you can’t help but love. But I’m doing it Tina-style, and bringing the glitter, choreography, queers & queens.

She added that the project would be centred around “the zombie apocalypse, seen through the eyes of the patrons at a drag nightclub.”

This new installment is sure to be fresh and modern take on what are now the classic horror movies that fans have come to know and love. It will also be interesting to find out what kind of social commentary of the film will tell, especially given that the LGBTQ perspective isn’t often represented in the horror genre.

Tina currently lives in Brooklyn, NYC, where she has lived since graduating from Wellesley College in 2006. She is a dance enthusiast and DJ, who works under the name DJTRx. Her brother, George Cameron Romero, is also working on a The Night of the Living Dead prequel. 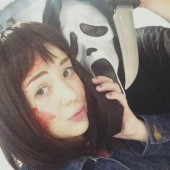 I am a 24 year old writer living in Scotland who is passionate about all things horror, although I do have a softer side.