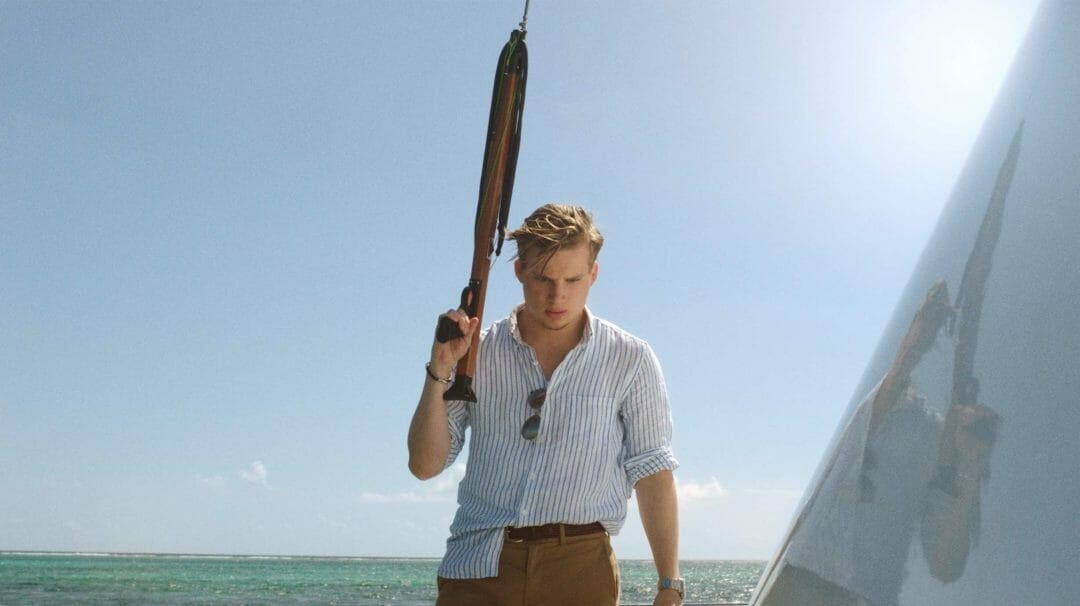 The newest trailer for director Rob Grant’s (Mon Ami, Alive) horror-comedy, Harpoon, is strange, meta, and sets a very specific tone for the film’s impending release. Its trailer comes with the news that Harpoon was acquired by DREAD, Epic’s genre label.

Harpoon’s trailer opens with voice-of-god narration that pokes fun at quotes often included in trailers that shower the film with praise. This introduction seems so strange at first, because the text is layered over footage of a boat in the middle of the ocean; the connection doesn’t make sense. But as you keep watching, you realize it’s all part of the film’s unique tone. Our narrator then starts to speed through “reviews” attributed to the director, his friends, and his mom. And the footage starts to get bloodier and more disturbing. All of these strange parts together create a trailer for a film that has definitely piqued my interest.

This is the film’s official synopsis:

Harpoon is a black comedy about the rivalries, dark secrets, and sexual tension that amount when three best friends find themselves stranded on a yacht in the middle of the ocean under suspicious circumstances. Written by Grant, Harpoon is a brutal and absurd genre film that brings a new twist to the lost at sea genre.

DREAD Director of Distribution, Rob Galluzzo, said of the film:

“Rob Grant has crafted a dark, twisted, funny feature that is unlike anything else on our slate. We’re so thrilled and excited to share this unique flick with U.S. audiences!”

Harpoon made its world premiere at the 2019 International Film Festival Rotterdam. It most recently screened at the Chattanooga Film Festival and Calgary Underground Film Festival, where it won the festival’s Audience Award for Best Narrative Feature.

There’s no news yet about when Harpoon will be released, but we’ll make sure to share any news as we hear it. What do you think of the trailer?  Let us know your thoughts on Twitter, Instagram, Reddit, and in the Horror Fiends of Nightmare on Film Street Facebook group!