When A Few Become One: The Best Stitched Together Creations in Horror

If we’re talking about classic movie monsters, you don’t get more classic than Frankenstein’s Monster. It’s been over 200 years since Mary Shelley introduced us to the often-misnamed sewn-together monster who isn’t really a monster at all. Since 1818, Frankenstein’s Monster has had a hell of a lot of adventures. He’s fought for the attention of the Bride of Frankenstein (1935), he’s performed dance routines with Gene Wilder in Young Frankenstein (1974), and he’s even hung out with Alvin and the Chipmunks.

Well, I think it’s time to recognize some of the other great sewn-together creations from the world of horror. There are many more monsters and creatures who have been stitched together from various body parts, and this article is here to celebrate ten of the best! The centipede in The Human Centipede (First Sequence) is quite a unique entry on this list, in that it’s made up of three living humans sewn together to create one, larger creature, rather than using hacked-up body parts.

For some reason, surgeon Josef Heiter has dreams of creating a creature that shares a single digestive system and achieves this by sewing three kidnapped tourists together mouth to anus. It also involves removing a few of their teeth, damaging their knee ligaments so they’re forced to crawl, and creating flaps in the skin of their buttocks so they can be efficiently sewn together.

It’s horrifying to think of your body being cut up and sewn to someone else’s after you’re dead, but imagine it happening while you’re still alive and very aware of what is happening. The ending of the movie is all the bleaker when only the middle section of the centipede is left alive. The movie Pieces is quite a bananas ride, and it’s a story that both starts and ends with a jigsaw of a woman, even if the mediums of the jigsaws are quite different. The story follows a serial killer who is terrorizing a college campus with a chainsaw, dismembering his victims, and stealing various body parts from the scene.

In the final reveal, it turns out the killer has been building a human jigsaw with the body parts he has been stealing. The sewn-together creation is found stashed in a cupboard, and while she appears to be dead, she comes to life for one final scare when she castrates Kendall through his trousers with her bare hands.

When Jeffery’s fiancee Elizabeth is killed in a freak lawnmower accident, he decides to bring her back to life with his extensive medical knowledge. However, with Elizabeth’s head being the only thing that didn’t get minced, Jeffery is forced to source her new body parts from other women.

He, charmingly, decides to target some New York sex workers for his creation, thinking that no-one will miss them after they die. After accidentally killing more women than he intended to with his homemade exploding crack recipe, he creates the perfect women out of the salvaged body parts.

The only problem is Elizabeth’s mind has got a bit muddled with the other women she now shares a body with, and after knocking Jeffery out, she heads back into the city to see if she can score a date and some cash. Mars Attacks! follows what would happen to the Earth if a bunch of very trigger-happy Martians attacked the population. While they vaporize most of the people they come across, they do decide to kidnap a few unlucky humans to take back to the ship and conduct experiments on. One of those unfortunate few is chat show host Nathalie Lake and her pet chihuahua, Poppy.

While Nathalie isn’t killed by the Martians, she befalls a much more horrific fate when she has her head swapped with that of her chihuahua. This leads to her trotting around the ship with her comically-oversized head and perfect bob with Poppy’s head barks at her from Nathalie’s old body. Season four marked Buffy’s first year of college and a whole new host of monsters befalling the town of Sunnydale. However, the Big Bad that season was Adam, a genetically-created super-soldier created by The Initiative as the ultimate defense weapon.

Adam is quite the concoction and is made up of the best parts of various demons, as well as a few dead Initiative soldiers, and a couple of robot parts thrown in for good measure. Like all good man-made creatures, Adam immediately kills his maker, Professor Walsh, for foolishly thinking she could play God. Because he exhibits the qualities of so many bad guys from the Buffyverse, Adam is more than a match for Buffy’s slayer powers, but the Scooby Gang successfully teams up to take Adam down. Herbert West and Dan Cain are two men who really never learn their lesson, and after the carnage of Re-Animator (1985) and Dan watching his girlfriend, Meg, die, you would think they might calm down, on the whole, reanimating the dead thing. However, Herbert seems even more passionate about his post-death experiments and decides to try and build a whole new creature from dead body parts and bring it back to life using his glowing, green formula.

To aid Dan through the grieving process and encourage him to help with the experiment, Herbert decides to use Meg’s heart as well as the head of Gloria, a favorite patient of Dan’s, as parts of the creature. Combining these parts with the feet of a ballet dancer, the legs of a sex worker, the womb of a virgin, the arms of a waitress, and a hand from a lawyer, Herbert hopes to create the perfect woman.

Unfortunately for The Bride, Dan finally gets over the loss of Meg and shuns The Bride almost immediately when all she wants is some love and attention. Patchwork tells the story of three young women (Jennifer, Ellie, and Madeleine) who are out at a club one night and end up being kidnapped and murdered by a budding scientist who chops them up and sews them together into one monstrous being.

When the creature awakens, the women find that all three of their consciousnesses are still present, and they have to work together to have proper control of their new body and deal with what has happened to them. While it’s initially a bumpy ride, Jennifer, Ellie, and Madeleine soon discover how to work as one so they can adjust to their new life and get their revenge on the man who killed them. 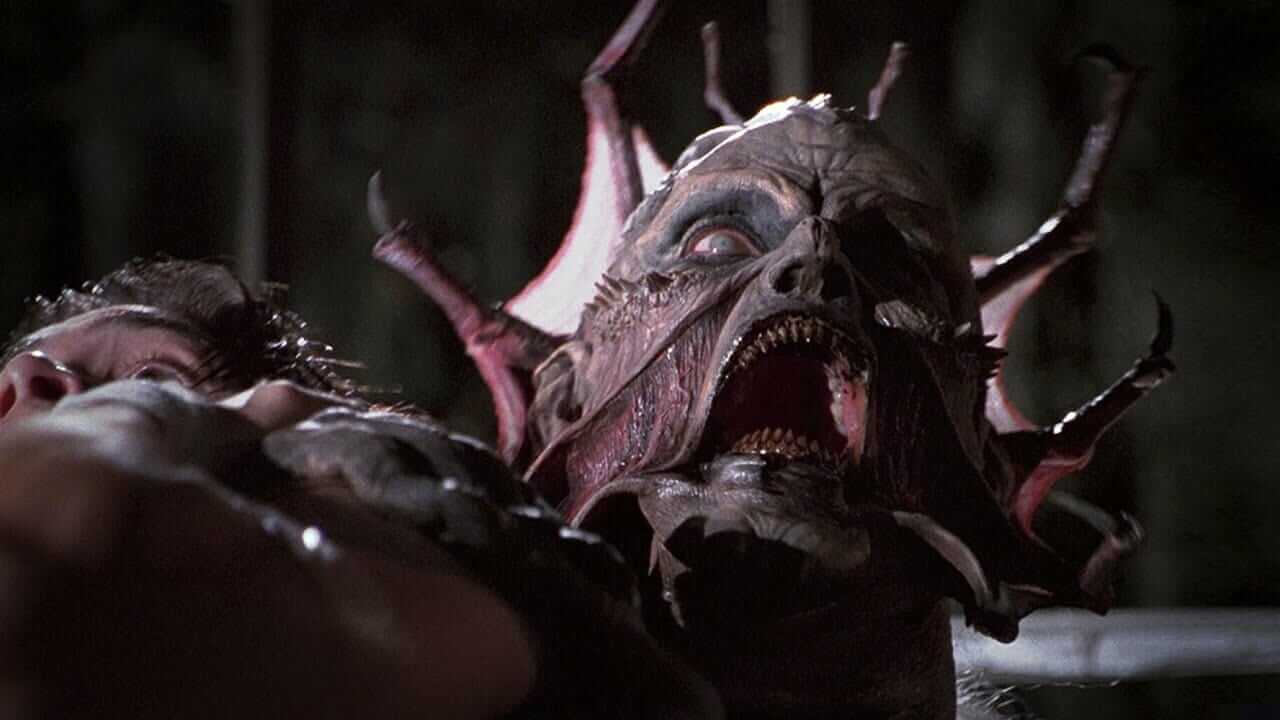 The Creeper may only pop up for 23 days every 23rd spring, but he still manages to rack up a serious body count. The Creeper has to eat parts of people he likes the smell of in order to regenerate his own decaying or injured body parts.

That means the Creeper is left with a lot of almost-whole bodies that he no longer has a use for and needs to hide. So he comes up with the logical solutions of stitching together a human patchwork quilt and using it to covering the walls of the basement of his abandoned church hideout. Preserving the bodies so they don’t rot, the Creeper is very dedicated to the upkeep of his hideous wallpaper until he has to burn his hideout to the ground to destroy the evidence of his past crimes. May’s mother may not have been very loving or supportive, but she did give her daughter some advice that she carries with her from childhood to adulthood – if you can’t find a friend, make one. While May manages to make romantic connections and friends at work, her obsessions with the perfect parts of people leads her to push away those closest to her and leave her feeling lonely and isolated.

After an accident destroys the doll who has been her lifelong friend, May decides to make herself a new friend by collecting all those perfect body parts and sewing them together into one creation. She even sacrifices her own eye so that the creature, Amy, can see her. While it seems like all of May’s sacrifice may have been for nothing, as she weeps on Amy’s chest, her creation comes to life and lovingly strokes her creator’s hair. Let’s face it, Sally is the only sensible citizen of Halloweentown, and the only one brave enough to call Jack on his ridiculous plans, even if doesn’t listen to her. Sally is the creation of Dr Finklestein, and while he expects her to wait on him hand and foot, Sally has much grander ideas for her life. She’s a rag doll stuffed with leaves, with a slight psychic ability, a love of cooking, and a talent for sewing things, including herself.

Sally is fearless when it comes to helping her friends, and makes a kick-ass care package. However, she also knows a killer poison soup recipe, so make sure you don’t get on the wrong side of her.

Who’s your favorite patchwork characters in horror? Did you find them on this list? Let us know all about your favorite creations over to Twitter, Reddit, or in the Horror Movie Fiend Club on Facebook, and get more horror delivered straight to your inbox by joining the Neighbourhood Watch Newsletter.