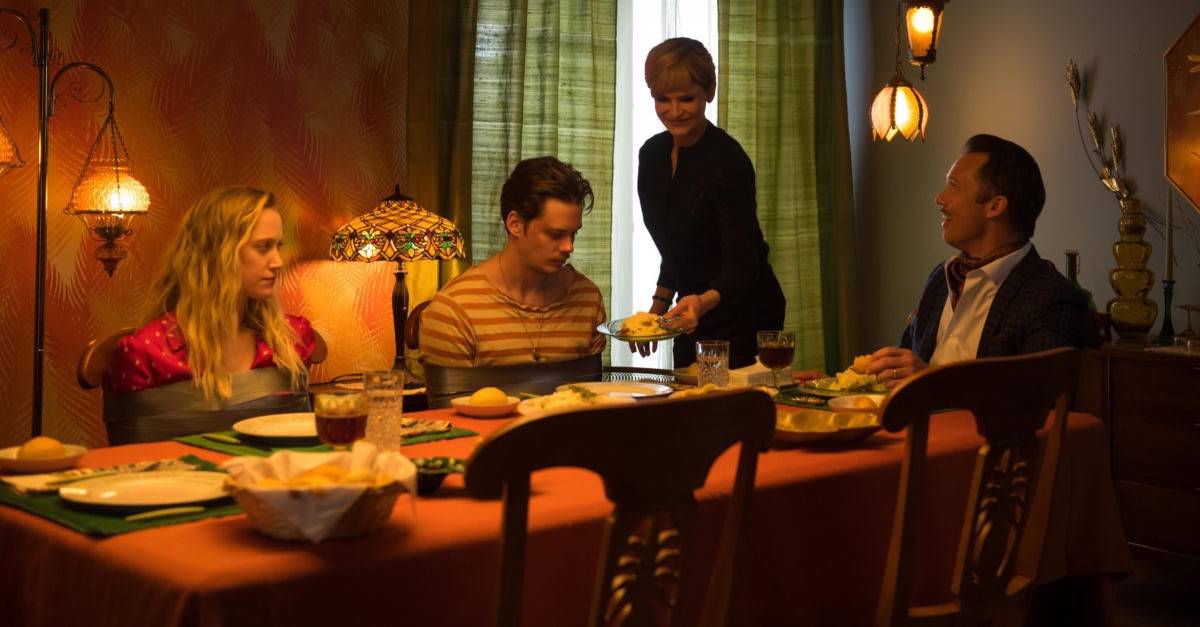 Sometimes all you want to do is rob some people so you can escape to Florida with your boo. And sometimes those plans are thwarted by two people more twisted and demented than you. This is the essence of Robert Olsen and Dan Berk’s (The Stakelander) newest film, Villains. Two desperate thieves break into the house of a wealthy couple, but when they find a little girl chained up in the basement, the young couple realizes they may have bit off more than they can chew.

The film’s new trailer captures the outlandish nature of Villains and how it seamlessly weaves together violence and comedy to create a truly over-the-top experience. The core performances by Bill Skårsgard (IT), Maika Monre (It Follows), Jeffrey Donovan (Burn Notice), and Kyra Sedgwick (The Closer) take the story and elevate it to another level of entertaining. Sedgwick, in particular, is off the rails as you can see in the trailer. She easily moves from sultry minx to polished housewife.

Mickey (Skårsgard) and Jules (Monroe) are lovers on the run, headed southbound for a fresh start in the Sunshine State. When their car dies after a gas station robbery, they break into a nearby house looking for a new set of wheels. What they find instead is a dark secret and a sweet-as-pie pair of homeowners who will do anything to keep it from getting out.

I was able to see Villains are part of the 2019 North Bend Film Festival. In my review, I wrote: “Villains packs a strangely emotional punch at its end, which feels out of place for a film that relies so heavily on the outrageous. This combination of over-the-top comedy and unexpected emotional impact isn’t always effective, but still work together to create a unique take on the home invasion movie. Come for the premise, stay for the phenomenal performances in Olsen and Berk’s Villains.” Read the full review HERE.

The film’s new poster also captures its colorful and anachronistic aesthetic. Bright colors that seem like they belong in the 1960s cover the walls, and the poster’s color scheme and font choice reflect that. Villains’ truly has its own look and feel that makes it feel like it belongs in another time period.

Villains hits theaters on September 20, 2019. What do you think of Villains? Are you ready to see Bill Skårsgard out of the clown makeup? Let us know your thoughts on Twitter, Instagram, Reddit, and in the Horror Fiends of Nightmare on Film Street Facebook group!