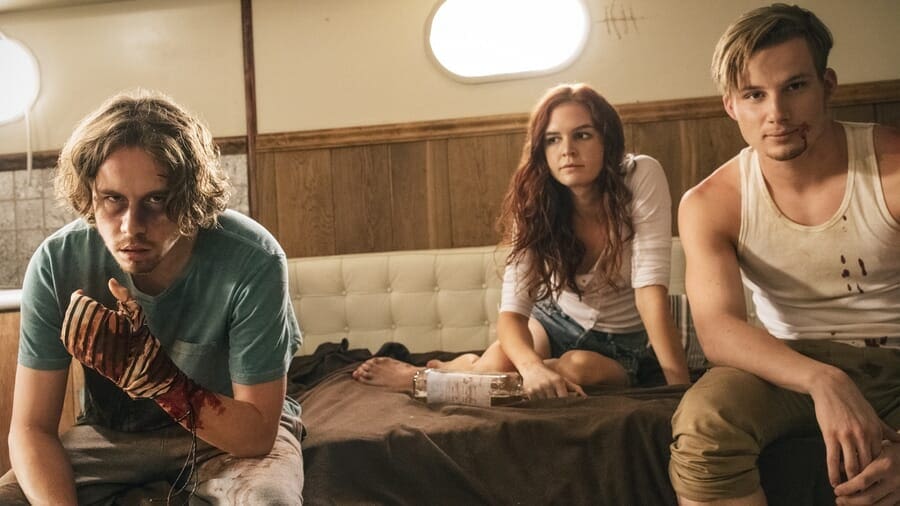 If you have to be lost at sea, wouldn’t you want to be lost with a few of your best friends? The recently released teaser trailer for the Canadian film Harpoon has us thinking perhaps not. While the trailer is indeed a teaser, it does set the stage for a guaranteed tense situation. Details may be a bit limited at this time, but the hook has certainly been baited and cast out for genre fans.

The official synopsis describes Harpoon as a “dark comedy about the rivalries, dark secrets, and sexual tension that amount when three best friends find themselves stranded on a yacht in the middle of the ocean under suspicious circumstances“. The film is written and directed by Rob Grant (Mon Ami, Knuckleball) and produced by Michael Peterson (Alive), Kurtis David Harder (What Keeps You Alive) and Julian Black Antelope (Knuckleball). The young cast features performances by Munro Chambers (Turbo Kid), Christopher Gray (The Mist) and Emily Tyra (Code Black) as the unfortunate three best friends.

Before the film has even hit screens, it has already been picked up by Yellow Veil Pictures.  This relationship between the NY/LA based arthouse sales company and the film imbues a certain amount good vibes towards Harpoon as Yellow Veil recently brought light to films such as The Ranger, Luz and Starfish. Joe Yanick, Yellow Veil co-founder had this to say about the film:

Rob (Grant) has an ability to mine the depth of human darkness, and come up with something wickedly funny. As our first foray into the subgenre, we found one with something for everyone. You’re going to laugh…but then it’s going to make feel bad for laughing.

While it may be a bit before the film comes to a theater near you, Harpoon will be having it’s world premiere at the the 48th International Film Festival Rotterdam in just a few weeks. Keep your eyes peeled, if it’s anything like the other films on Yellow Veil’s roster, you might just be seeing Harpoon at a festival near you this coming year.