There’s a lot of staple features in horror movies that are designed to unnerve and creep out the viewer, and something that is used time and time again is bugs, insects, spiders, and generally anything with a lot of legs. Because bugs exist in real life, it doesn’t matter how fantastical the rest of the plot is, the filmmakers know that they are tapping into real fears when they use bugs to scare us.

With that in mind, and with a lot of time involved trying to narrow my initial list down, here are ten of my favourite bug-related moments from horror movies, perfect for your #31DayHorrorChallenge watchlist this Halloween season.

The Unborn (2009) tells the story of Casey, a young woman who is being haunted by a dybbuk who wants revenge on her family and is desperate to find a body to live in. This movie is packed with Jerusalem crickets, a particularly icky-looking thick-legged insect.

While they pop up a few times during the film, there’s one particularly gruesome scene while Casey is trying to calm herself down in a nightclub bathroom. As she sits on the floor of a bathroom stall, the toilet in the next stall starts overflowing murky water swimming with Jerusalem crickets. Soon the sinks are spewing them out as well, and as something otherworldly tries to burst through the walls to reach Casey, she’s stuck in a bug-infested nightmare. Hostel III (2001) moves the action to Las Vegas and turns the murder of innocent people into something rich people can gamble on. When Scott, Carter, Mike, and Justin head to Vegas for Scott’s bachelor party, they end up getting more than they bargained for. While the gang are out drinking, Mike and an escort, Nikki, are kidnapped by the Elite Hunting Club and taken to their private club.

As the group of sadistic gamblers watch on, Nikki is strapped to a metal table and has a bunch of giant cockroaches poured all over her. They immediately swarm all over her face, into her mouth, and down her throat. We’re treated to a lovely shot from inside Nikki’s throat as the cockroaches fill her mouth, eventually suffocating her. 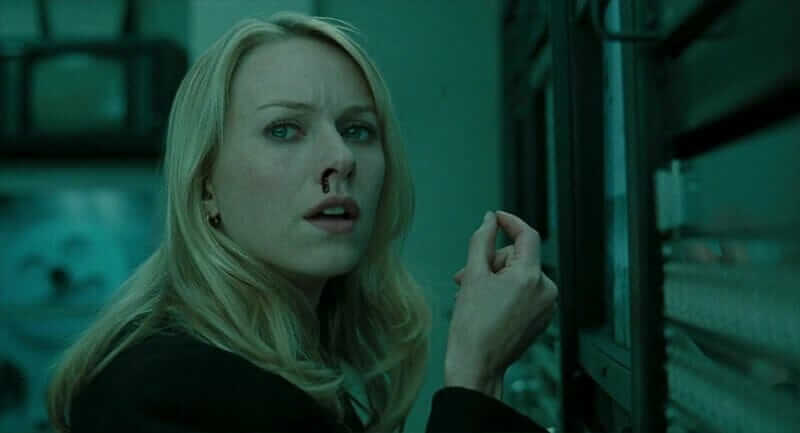 In The Ring (2002), Rachel has to quickly adjust to the fact that cursed videotapes are real, and what may be the last week of her life is going to be a particularly terrifying one. Desperately trying to break the curse before Samara comes for her, Rachel uses the equipment at her newspaper office the analyse the video for clues.

While pausing the video to take screenshots of the image, she notices a fly on the screen who seems to be moving slightly despite the tape being paused. When Rachel reaches out to touch the fly, she manages to pluck it from the video monitor before her nose starts bleeding.

We’re back with even more cockroaches, and this time they are part of the “They’re Creeping Up on You” segment of Creepshow (1982). Upson Pratt is a man who hates dirt and mess. So much so that he lives in an electronically-run, hermetically sealed apartment and conducts all his business over the phone.

However, one night during a particularly bad storm, Upson’s apartment is overrun by cockroaches. While it’s only a few at first, soon the apartment is literally filling up with them. Upson locks himself in his panic room to escape, but the cockroaches find their way inside and cause Upson to suffer a heart attack.

I’ve decided to use two entries for number six because they’re both quite similar but I feel they both deserve recognition. In The Lost Boys (1987), Michael is hanging out with his new friends in their hideaway, enjoying a little Chinese takeout. David, the leader of the gang, is keen to show off and intimidate Michael, and so uses a little bit of his power of vampire persuasion to make Michael think he’s eating maggots instead of rice.

In Ghost Ship (2002), after a salvage crew get stuck aboard the wreck of the SS Antonia Graza, they find themselves searching for food in the ruined kitchen. After finding some canned food which they think may still be good, they start tucking in after a quick taste test confirms the food is edible. However, after a few hungry mouthfuls, the food is revealed to be rotten and riddled with maggots, and some evil entity aboard the ship was tricking them into eating the spoiled goods.

In the opening scene of The Mummy (1999), we see Imhotep being buried alive with a bunch of flesh-eating scarab beetles, and you just know those beetles are going to make another appearance later in the movie.

Sure enough, when an expedition ends up disturbing Imhotep’s tomb around 600 years later, a mummy isn’t the only thing they have to worry about. The tomb is overrun with the scarab beetles, just waiting for some fresh flesh to feast on. This leads to a lot of people getting eaten, as the beetles burrow their way under people’s skin. The Mist (2007) is an absolute nightmare of a film that sees a group of local residents trapped in a store after a mysterious mist that’s teeming with monsters descends upon the town. While most of the action takes place with the walls of the store, the group decide to visit the nearby pharmacy to grab some essential supplies.

The place is covered in giant spiderwebs, which may a good indicator of what is waiting for them in the darkness. As the group try to rescue a survivor strung up in the webs, his face bursts to reveal a lot of baby spiders. The giant adult spiders soon make themselves known, and if they weren’t already terrifying enough, they also shoot acidic webs. Delightful.

Most of the story of Halloween III: Season of the Witch (1982) centres around the mysterious Silver Shamrock Halloween masks and all the deaths that keep occurring to those who investigate the masks.

As the audience, we know something strange is going on, but it’s not until we see Silver Shamrock test their mask out on a young boy at their testing facility that we realise how gruesome the plan really is. When the mask wearers watch a certain Silver Shamrock on the TV, it activates the mask, causing the wearer’s head to cave-in and spew out a bunch of bugs. There’s no denying that Arachnophobia (1990) is chock-full of horrifying spider moments, but if I had to narrow it down to my favourite (meaning the one that causes me to press a cushion over my face) is has to be the finale house invasion.

Ross Jennings returns to his home to warn his wife and children that their barn is likely the site of a killer spider nest. However, just as he arrives home, the spider soldiers decide to make themselves known by swarming all over the house. They push their way through doorknobs, spring down from the ceiling, and gush out of the bathroom sink at an alarming rate. It’s even worse when you know all of the spiders in those scenes were completely real. If we’re talking about fantastic, bug-filled finales then there was never any doubt that The Craft (1996) was going to be included. Earlier in the movie, Sarah shares with her fellow witches that when her mental health was at its worse, she was plagued by visions of bugs, spiders, and snakes crawling all around her.

When Nancy plans to kill Sarah, the witches use a glamour spell to convince Sarah her house is overrun with insects and snakes in an attempt to push her over the edge. They cover the walls and ceilings, swarm the stairs outside, and pour out of the toilet until Sarah has to cower in the bath and wait for the vision to be over. However, once Sarah invokes the power of Manon, she turns things around on Nancy, making her believe her fingers are turning into snakes and cockroaches are swarming her body.

What are your favorite bug-related moments in horror? What creepy-crawly infested scenes send chills down your spine? Share your fear and your #31DAyHorrorChallenge picks with us over on Twitter, Reddit, and in the horror movie fiend club on Facebook! For more horror straight to your inbox, be sure to join the Neighbourhood Watch!