I think I’m preaching to the choir when I say The Mummy (2017) was not a promising start to Universal’s new Dark Universe. It was enough to curdle the blood of Universal Monster fans everywhere and send them raging onto the streets. I’m guilty of the same thing. But lets not grab our torches and pitchforks yet, fiends.

Bill Condon, director of Beauty and the Beast (2017), sat down with Forbes and mentioned some news that might settle your nerves about the upcoming Bride of Frankenstein film.

For me, the James Whale movie is really right there in the pantheon for me. As you know, the Bride is a character who appears in the last five minutes and then is destroyed, so it’s a way to almost continue the movie that you imagine the movie he might have made the third Frankenstein movie but in 2018.

As Condon said, Whale’s Bride of Frankenstein is right in the pantheon for him. It was almost twenty years ago that Bill Condon directed Gods and Monsters (1998) staring Ian McKellen. It was a bio pic of James Whale himself that generated plenty of Oscar buzz and wound up winning the award for Best Writing Adapted Screenplay. It’s clear that Condon knows his stuff when it comes to Bride’s original director, so he gets a point for that. Let’s see what else he has to say…

I’ve got the same team together that made Beauty and the Beast and we’re building big sets and designing big set pieces, so it’s a pretty big movie…. We start on February 1st, 2018 so it’s the early days but just to be here in London, starting to see locations and to talk about sets that we’re building, it’s very exciting.

Big set pieces? February 1st?? This is all sounding quite promising. When asked about the rumor that Angelina Jolie would be playing the Bride, Condon had this to report:

Not yet, no. Nothing is set yet. I think pretty soon, but I think we’re trying to figure that out now, but obviously, pretty soon we’re going to have to start really honing in on it. I’m not trying to be coy, but I really shouldn’t say.

Hmmm… I guess we will know about Angie soon enough. Either way, things seem to be looking up for the Dark Universe. Let us hope things stay that way.

It appears Universal IS hesitating with the Dark Universe. Just moments ago Bride of Frankenstein was REMOVED from the upcoming schedule. Universal told Deadline today in a statement;

After thoughtful consideration, Universal Pictures and director Bill Condon have decided to postpone Bride of Frankenstein. None of us want to move too quickly to meet a release date when we know this special movie needs more time to come together. Bill is a director whose enormous talent has been proven time and again, and we all look forward to continuing to work on this film together.

Well, hopefully this delay comes as the studio re-thinks their Dark Universe strategy and works to create more successful interpretations of the Classic Universal Monsters. 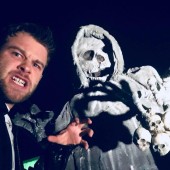