Family Plot: 10 Horror Houses That Come With Their Own Cemetery

Sometimes a new house comes with a great perk, like an in-ground pool, a huge fenced in backyard, or an actual study with floor to ceiling bookshelves (my dream). But sometimes, a house comes with an added appendage that your realtor doesn’t want to disclose. Maybe a gruesome murder occurred on the premises. Perhaps there is an insidious black mold lurking within the walls. Or maybe, the house comes with its own cemetery…

Sometimes, the connected graveyard is part of a crumbling old estate and might even add value to your new domicile. But other times, it is not at all part of what you signed up for as a new homeowner. Sometimes, the cemetery is not a literal resting place for human remains and other times, it is the final resting place of an ancient evil. All of these ideas and more are explored in 10 Horror Houses That Come With Their Own Cemetery…

First and foremost, we’re going with one of the Godfathers of Gore, Lucio Fulci, and his bizarre eighties fright fest. This Italian film is absolutely worth the watch, so find it where you can and grab the popcorn. I don’t want to say too much about the plot to avoid spoilers, but this film has it all: evil doctors, random tombstone portals, and a really scary basement.

This is one of my absolute favorites on this list and it’s a case of a cemetery on the property of a home that the poor owners know nothing about. Directed by the legendary Tobe Hooper (The Texas Chainsaw Massacre) with a screenplay by the iconic Stephen Spielberg (E.T.) as well as the acting talents of Craig T. Nelson (The Devil’s Advocate) and JoBeth Williams (Barracuda), there is no way that this movie is not worth repeated viewings. Not to gush too much here or disclose too much plot or trivia (which is worth the research if you have the time), but this tale of a house built upon an ancient burial ground still holds up all these decades later.

Angelica Huston (The Witches) and Raul Julia (Kiss of the Spider Woman) are such a fantastic cinematic interpretation of the Charles Addams’s beloved gothic family. The cemetery on the grounds of the Addams’s family estate plays a part in the storyline of this black comedy, but unlike several of the other entries, it is a safe have, not something to be feared.

Michele Soavi was known for working alongside such horror greats as Dario Argento (Suspiria) and Lucio Fulci (House by the Cemetery), but in the early nineties, he took the reins and directed this horror-comedy. Starring Rupert Everett (Miss Peregrine’s Home for Peculiar Children), this movie tells the tale of a very eccentric cemetery caretaker who is not only unlucky in love but also has to deal with “returners,” corpses that rise with a vengeance seven days after death.

This relatively obscure horror flick doesn’t feature a human cemetery on the grounds of a home, but a graveyard for once beloved dolls in the form of a samurai, a German soldier, a baby, and an African warrior. Sounds weird right? Well, it kind of is. At its core, this film is a revenge tale that touches on the difficult topics of child abuse as well as old fashioned bullying.

This list would not be complete without the classic tale of the burial place just down the way where things don’t stay dead. For this list, I’m referring to the eighties version, not the current remake, as that is my personal preference. While it may not completely hold up today, I still find poor little Gage’s character as upsetting and as frightening as I did all those years ago.

This movie is a classic case of, “didn’t anyone learn from what happened here last time?” Does nobody try to help a family out? In this sequel, an entirely new family has a run-in with the Mi’kmaq burial ground, and it goes just as well as it did for the previous guests. Dead is better for the unfortunates in this nineties horror sequel.

This Italian grindhouse film, directed by Andrea Bianchi, tells the gruesome story of an ancient Italian crypt on the grounds of a sprawling estate and what happens when a zombie curse is unleashed there. This film is almost non-stop gore and is probably not for the faint of heart, or for those that like their horror flicks with a happy ending.

While this eighties anthology horror classic doesn’t feature a cemetery all the way through, one of the tales, Father’s Day, does. It’s one of the most frightening stories in the bunch, and it is absolutely worth a mention on this list. Stephen King and George Romero really knocked it out of the park with this one and each of the tales in this film are a fantastic creepy take on an old school horror comic.

Bear with me on this one. It may not feature a cemetery in the traditional sense, but this horror comedy starring Willam Katt (Carrie) and Richard Moll (Scary Movie 2) can be seen as featuring a sort of “cemetery of the mind,” where all of the protagonist’s greatest fears and troubles have found a place to rest in  peace in his deceased aunt’s creepy haunted house. The scary hijinks that Katt’s character go through really do pack a punch, and the moments of humor are much appreciated as we’re along for the ride.

We’re talking all month long about Horror in the Home, so make sure to keep an eye on the homepage for more great spooky home content. We’d recommend Tyler Liston’s editorial on why Domestic Horrors are so chilling and Nina Nesseth’s list of the worst family reunions in horror, but that’s just crossing the threshold of this ghoulish getaway. For way more Haunted Home reading, follow us on Facebook, Instagram, and Twitter, and for all your horror movie news, reviews and interviews, keep lurking at Nightmare on Film Street. 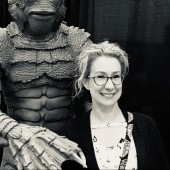