This is a warning repeated over and over again in Guillermo del Toro’s lush and lustful 2015 film Crimson Peak. The line is a harbinger of doom, meant to alert both the film’s protagonist and its viewers of imminent darkness to come. But after five years of defending Crimson Peak, sometimes I wonder if people have taken it too literally, casting the film aside as a lesser entry in del Toro’s filmography and, worse, not worth revisiting.

You may recall that Crimson Peak was marketed as a traditional ghost story, anticipated to be another entry in the del Toro’s growing collection of gutting genre flicks like Pan’s Labyrinth and The Devil’s Backbone. However, upon its wide release, many fans were disappointed to discover that Crimson Peak is actually a Gothic romance in the tradition of Daphne du Maurier’s Rebecca (famously adapted by Alfred Hitchcock, with a new Ben Wheatley adaptation headed to Netflix this October) and Henry James’s The Turn of the Screw (the inspiration for 1961’s The Innocents, this year’s The Turning, and the upcoming The Haunting of Bly Manor), playing off horror traditions and tropes — yes, including ghosts — to explore terrifying truths about the more monstrous aspects of humanity. Others — like myself — were delighted by the surprise, immediately seduced by its dark pleasures and complicated female characters.

No matter how you feel about Crimson Peak as a whole, it’s hard to deny how objectively beautiful the film is to look at. And much of the beauty comes from the incredibly detailed period costume design by Kate Hawley (Pacific Rim, Suicide Squad). Taking place in the early 1900s, Crimson Peak invites us to follow American heiress and aspiring horror author Edith Cushing (Mia Wasikowska of Stoker, the new Alice in Wonderland films) as she becomes entangled with the suspicious, yet seductive Sharp siblings (Lucille and Thomas, played by Jessica Chastain and Tom Hiddleston, respectively). After Edith’s father (Jim Beaver, Supernatural) is murdered suddenly, Thomas proposes to a smitten Edith and invites her to live with him and Lucille at Allerdale Hall, their decaying English mansion where the ground bleeds red and ghosts sometimes appear.

As Lucille alludes to in one of their earliest meetings, she and Edith are natural foils, not unlike the moth and the butterfly. Jealous and joyless Lucille thrives in dark spaces like Allerdale, sulking around in deep blues, reds and blacks while she looks for something — or someone — to feed off of. Meanwhile, the fair-haired and humble Edith is a slow-blooming beauty who shines naturally in sunny golds, yellows and greens (with the occasional floral accent).

“Edith comes out of the cocoon she built for herself  […becoming] bolder and more masterful with time, a transition that is reflected in her Hawley’s calculated costuming.”

Over the course of the film, Edith comes out of the cocoon she built for herself while living with her single father (her mother died when she was a child, but occasionally reappears in her nightmares to offer that aforementioned warning). That’s not to say that Edith isn’t strong-willed or independent to begin with — after all, she boldly declares she wants to be the next Mary Shelley in the first few minutes of the film and refuses her father’s gift of an ink pen because she doesn’t want her delicate handwriting to hold her back from being taken seriously by publishers (a real possibility in her time). But Edith becomes bolder and more masterful with time, a transition that is reflected in her Hawley’s calculated costuming.

Even before catching Thomas and Lucille’s attention, Edith clearly stands out from her peers. While other women her age gallivant around garish floral accessories, she chooses more sensible accoutrements like straw hats and small wire glasses. She’s also not afraid to play around with different styles, with her transitioning from high-necked blouses in professional settings to saucy shoulder-baring sheaths at social gatherings. Wherever she goes, Edith is almost always seen in some sort of daring silhouette, her closet stocked with statement pieces including dresses and jackets with exceptionally puffy shoulders. Dramatic sleeves are Edith’s signature, appearing in both her day and night wardrobe almost as if to say this butterfly is always ready to take flight. One of Edith’s most iconic ensembles is her long white nightdress, which has such dramatic shoulders it wouldn’t feel out of place in an ’80s wedding photo (I, for one, wore an era-inappropriate bridal gown when I dressed as Edith for Halloween a few years ago). She is wearing this nightdress almost every time she encounters a ghost or apparition at Allerdale, including the blood-soaked finale where she goes up against Lucille in her own telling nighttime attire.

While Hawley puts Edith in increasingly vibrant colours as she transitions from single girl to married woman, she does not make Edith’s sleeves any smaller. It’s a fitting choice as — much to Lucille’s dismay — Edith does not shrink to fit her new family.

“Dramatic sleeves are Edith’s signature, appearing in both her day and night wardrobe almost as if to say this butterfly is always ready to take flight.”

Crimson Peak‘s heroine finds other ways to take up space in her restrictive environment, asserting her dominance through her relationship with Thomas (see: their sex scene, where she is decidedly on top) and defiance of Lucille’s rules. She explores all the floors and secret corridors of her new home until she uncovers one of Lucille and Thomas’s biggest secrets: she is not Thomas’s first wife, but the latest in a line of rich women who married into the Sharp family and eventually succumbed to sickness (or rather, drank too much of Lucille’s purposefully spiked tea). The ghosts she has been seeing at Allerdale are these lost souls and they have been trying — like her mother before them — to warn her of her fate.

While Edith is a woman who wears her heart on her sleeve(s), Lucille keeps everything — including her clothes — close to the chest. Whether she’s out in the world or simply staying close to Allerdale, Lucille always pulls her jet black hair into a restrictive updo, with nary a hair out of place. The cut of her clothing is also rather severe, her dresses tightly hugging her neck, shoulders, hips and legs in a way that makes her seem almost skeletal (one particular dress — a luxurious crimson gown with a train — even has spine-like detailing on the back). Lucille spends the majority of Crimson Peak in the same stunning, yet stuffy outfit: a long, blue velvet dress. This suggests that despite her tough exterior, Lucille does actually fear something: change. And who represents change more clearly than the independently thinking and acting Edith, who not only has taken up space in her beloved home, but also in her brother’s heart?

We don’t get a peek underneath Lucille’s repressive veil until the film’s climax, which begins in the attic of Allerdale. In a pearl-clutching twist, a nightdress-wearing Edith walks in on her sister-in-law with her hand down Thomas’s pants. Her hair down for the first time and sheer sleepwear barely clinging to her exposed shoulders, Lucille finally admits the darkest of truths: not only have she and Thomas killed people (their mother, Thomas’s previous wives, Edith’s father) in an attempt to collect inheritance, the two have also been engaging in an incestuous relationship since childhood.  As Lucille explains in one of the film’s most delicious moments, “the marriages were for money, but the horror was for love.”

“[…] Edith is both a beautiful and powerful butterfly, able to outsmart her supposedly domineering tormentor by preying on her own fragility.”

When she is talking to Edith about moths and butterflies near the start of the film, Lucille states that “beautiful things are fragile.” At that point, Lucille doesn’t realize the power Edith has, mistakenly assuming her to be yet another little caterpillar who can easily be preyed upon and perhaps even crushed entirely. But as we see so clearly in Crimson Peak‘s final moments, Edith is both a beautiful and powerful butterfly, able to outsmart her supposedly domineering tormentor by preying on her own fragility. And all while wearing her wonderfully dramatic, floor-length nightgown.

After Lucille kills Thomas in a fit of jealous rage, she chases down Edith and the two women have a showdown in the snow outside of Allerdale, which we learn is colloquially referred to as “Crimson Peak” (mother really does know best!). When Thomas’s ghost shows up, Lucille gets distracted and Edith takes the opportunity to strike, killing her with a shovel. With that, the moth is defeated, doomed to haunt her dark and dank home for the rest of eternity while the butterfly takes flight into her bright future. 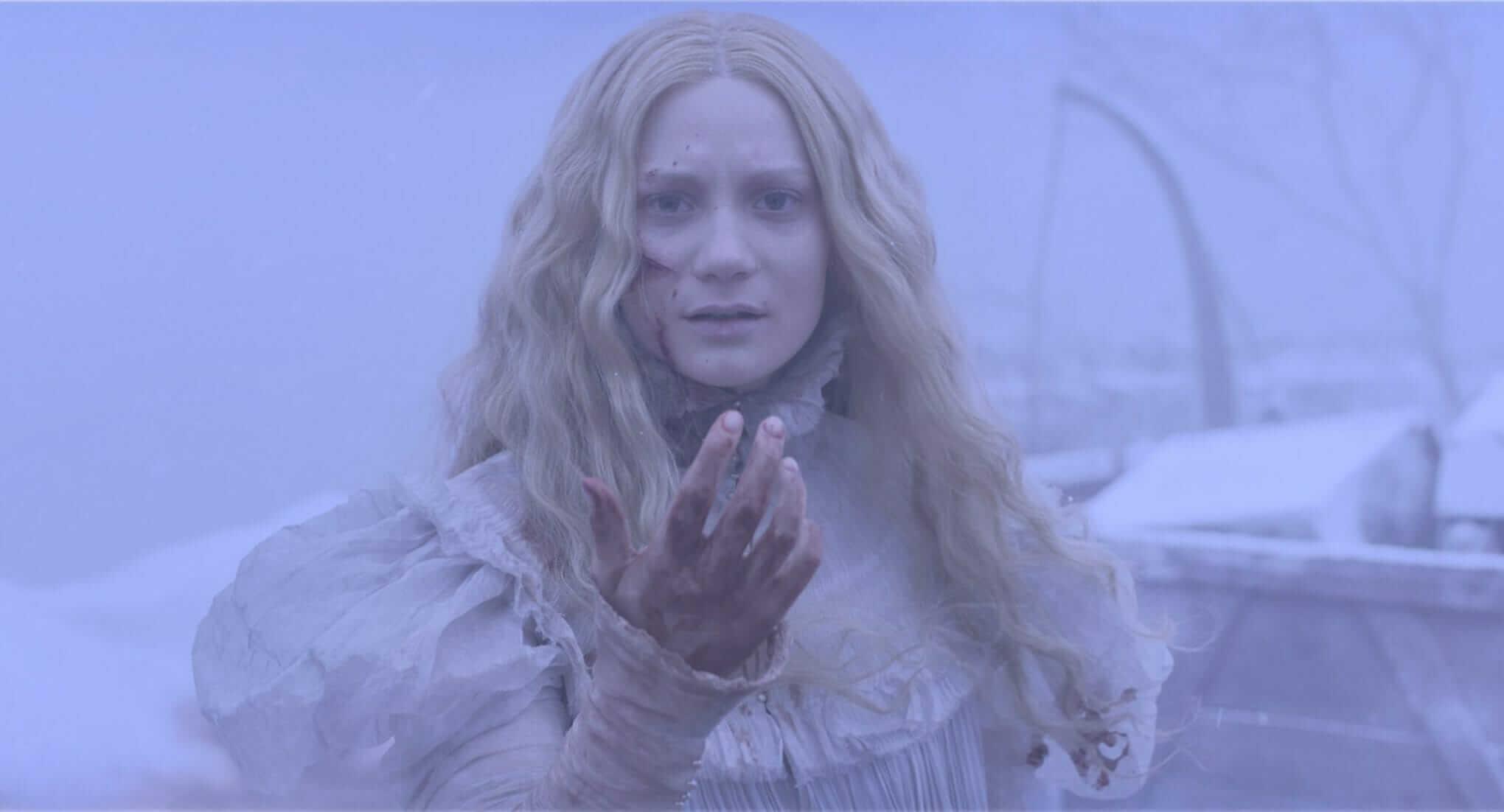 We learn through the credits that Edith went on to publish a novel titled — what else? — Crimson Peak. Sometimes when I can’t sleep, I dream about what a Crimson Peak sequel would look like, with a successful Edith dreaming up new ghost stories to tell. But then I stop myself and remember how unlikely that is.

As we approach its fifth anniversary, many people still consider Crimson Peak unremarkable, a pale comparison to del Toro’s other monstrous romance, The Shape of Water. But I know quite a few people who continue to swoon over the film, repeatedly losing themselves in the domestic drama, over-the-top gore, and, of course, those costumes (del Toro himself dedicated a wing of his At Home with Monsters exhibit to the film, particularly Hawley’s handiwork). Just as Edith is sure ghosts are real, I’m sure that if more people gave Crimson Peak another chance, they would find much more to adore than abhor. At the very least, they may have a new appreciation for a great statement sleeve.