Get Freaky Festive With These 6 Holiday Horror Films

It’s the season of candy canes, crowded shops, and Mariah Carey. Mall soundtracks are clogged with saccharine Christmas carols and cable TV is overwhelmed by sappy Christmas films. You can only watch so many Hallmark movies or retro holiday classics. Eventually, you must trade in those magical snowmen and stocking-stuffer meet-cutes for films where naughty trumps nice. Thankfully, there are a lot of genre films out there with festive themes AND killer scares.

Wondering what to watch? Looking for recommendations? Here are 6 great holiday horror films!

Theodore Gershuny directed Silent Night, Bloody Night in 1972, beating Black Christmas by 2 years. Silent Night, Bloody Night contains several elements that would soon become commonplace in horror films. POV killer shots and creepy phone calls loom large in the film, along with a surprising amount of blood. The plot centres around a family home with a dark past.  Silent Night, Bloody Night opens with the inexplicable death of family patriarch Wilfred Butler. The family home is then inherited by his grandson, Jeffrey. A lawyer and his assistant visit the small town of East Willard to help Jeffrey sell the home. When the two are brutally murdered, a series of strange phone calls point to a perpetrator tied to Jeffrey’s family history. A slowly unfolding mystery soon reveals grisly family secrets.

Creepy and atmospheric, the film is notable for featuring a number of former Warhol superstars, including Candy Darling, Ondine, and Mary Woronov (a dead ringer for Downton Abbey’s Michelle Dockery). While the acting can’t be rated as top-notch, it’s an interesting vintage slasher predecessor and worth a watch. The ASMR crew will enjoy a large amount of spooky whispering throughout the film. It can be a pain to find the perfect Christmas gift. In Gremlins, a well-meaning father acquires an adorable critter for his son over the protests of a perceptive shopkeeper. As time goes on, this perfect dream gift turns into a nightmare. The new pet multiplies into a scaly army, which tries to divide and conquer the unfortunate humans in its path. Want to get into a spirited discussion with distant family members about the hazards of capitalism and entitlement? Throw this on during your obligatory holiday gathering! Or just sit back and enjoy adorable puppetry, rebellious flouting of arcane rules, gaudy 1980s decor, catchy music, and incredibly fun mayhem. Gremlins is full of imaginative, entertaining and visually impressive sequences. Being a puppeteer on this set must have been a (challenging) blast. Bye, Billy!

Is it a Hallowe’en movie? Is it a Christmas movie? Why do we have to choose? Abandon the holiday binary and enjoy the fact that this stop-motion classic plays for both teams. The Nightmare Before Christmas and its overall aesthetic exert an indelible mark on popular culture. This is particularly noticeable if you spend any amount of time near a Hot Topic or on Etsy. The characters of Jack Skellington and Sally have been featured in countless works of fan art and merchandise. The film even inspired its own themed Jenga game!

Created during Tim Burton’s golden age (and mercifully free of the taint of Johnny Depp), this film has it all: gentle, family-friendly horror, an extremely palatable romantic subplot, a great sense of humour, and some of the greatest music ever found in film. It’s definitely earned its place as a beloved cult classic.

A babysitter’s last night with her favourite client goes sideways when the house is set upon by masked and armed intruders in Chris Peckover’s infectiously fun Better Watch Out (formerly known as Safe Neighbourhood). This new Christmas classic garnered great reviews on the festival circuit this year. The delicious twist is too good to spoil, so I won’t say too much about the plot. Suffice it to say that Better Watch Out is a subversive gem that belongs in any horror fan’s stocking this year. Brisk pacing, high production values, excellent performances, and wickedly dark comedy edged this film onto my top 15 list of the year. It is out on Blu-ray/DVD now, just in time for holiday viewing!

Bob Clark’s Canuck classic Black Christmas is the gold standard of holiday horror films. It’s the one Christmas film that I revisit each December without fail (Rudolph the Red-Nosed Reindeer is a close second). Horror scholars often cite Black Christmas as the first in the slasher subgenre. It’s also been highly influential in the babysitter-in-peril genre due to its insanely creepy phone call sequences.

While the setting of a sorority house now seems cliche, Black Christmas was a female-centred film that addresses some sensitive issues in a very progressive way, reinforcing a woman’s agency and right to choose via Jess’s unplanned pregnancy storyline. Plus, it’s Canadian! And while the above are all very good reasons to watch this genuinely creepy Christmas classic, Margot Kidder’s performance as the alternately amiable and cutting lush Barb alone is worth the price of admission. I’ll never look at turtles the same way again.

Jalmari Helander’s 2010 Finnish horror-fantasy gem Rare Exports is the rare holiday horror film I’ll place above Black Christmas. Helander also wrote and directed the two short films on which it was based. Rare Exports is set in a rural mountain town on the border between Finland and Russia. The town is beset by strange happenings after a British drilling team unearths something better left buried. Rare Exports features a clever story, emotionally resonant family drama, and a final act that will make you stand and cheer. Incredible, poignant performances by Jorma Tommila and Onni Tommila as father and son Pietari and Rauno are exquisitely rendered with gorgeous colour grading and cinematography. If you like your Santa Claus more dark folklore than Coca-Cola, you’ll love Rare Exports.

What’s your favourite holiday horror film? Sound off in the comments, below! 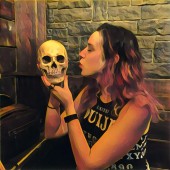